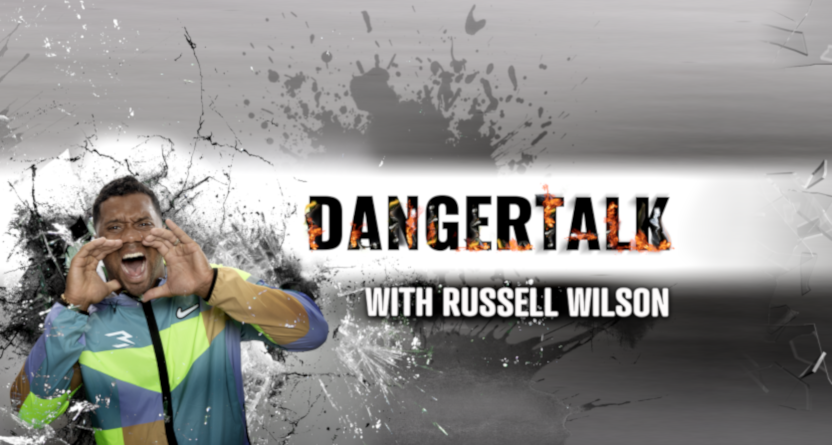 While current athletes have been joining media organizations as commentators in one capacity or another for around a century (including oft-ghostwritten columns from the likes of Babe Ruth and Lou Gehrig), that discussion has taken on some new dimensions in recent years. Since at least the 1920s, many former athletes and coaches have moved into sportswriting or commentary roles with media organizations, from Harold Abrahams through Irv Cross, John Madden, Charles Barkley and many more, but it’s been rarer to see active athletes also have media roles since the Ruth and Gehrig days. That’s changed a lot in the last decade, though, with countless active athletes now having media platforms. And the latest one there is Seattle Seahawks’ quarterback Russell Wilson, who’s launching a new “DangerTalk” video podcast “in collaboration with ESPN.”

Wilson previously hosted a podcast under that same name, but this will be a new endeavor, and it will be co-hosted by comedian Jeff Dye. The first episode, featuring Turner Sports’ analyst Shaquille O’Neal, launched today. Here’s some more on this new podcast:

Today West2East Productions announced they are collaborating with ESPN to distribute Russell Wilson’s new DangerTalk podcast.  Video episodes will stream on the ESPN App and ESPN’s YouTube, Twitter, and Facebook accounts.  Episodes will also be available to listeners for free on Apple Podcasts.  The show will launch today with first guest, basketball legend Shaquille O’Neal.

Executive produced by Wilson and Daniel Mogg for Wilson’s West2East Productions, the weekly podcast will feature guests across the sports, entertainment, and business worlds talking about everything from their area of expertise to overcoming challenges to current events.

…Looking forward to the launch, Wilson said, “I’ve been wanting to launch this podcast for some time now and given everything happening in our country, I can’t imagine a better time to be speaking about important issues with incredible figures from around the world.  For me this show is about discussing sports & entertainment and life’s successes and failures, while also diving into tough topics in today’s culture.”

“Adding ‘DangerTalk’ to our lineup of digital shows will add a new dimension to the types of content we offer to fans,” said Mike Foss, Sr. Director of Digital & Social Video, ESPN. “We’ve seen great success in producing shows around podcasts, including with Matthew Berry and Ariel Helwani, and we look forward to giving Russell’s a platform across our digital and social channels.”

This podcast in and of itself is somewhat notable. But it’s maybe more notable as a further indication of how things have changed when it comes to athletes producing content for the outlets that cover them. The trend of active athletes producing content for media outlets has grown significantly in the last decade, from LeBron James’ “The Decision” through athlete-bylined (but not always athlete-penned) articles at The Players’ Tribune (and similar first-person narratives with an “as told to” credit at other media outlets) through commentary roles for active athletes like Greg Olsen, CC Sabathia, and Draymond Green.

Those commentary spots come with some concerns. Olsen’s guest commentary role on the NFL on Fox in 2018 bothered Minnesota Vikings’ GM Rick Spielman, as it came shortly before the Vikings were set to play Olsen’s Carolina Panthers and Spielman thought production meetings might give Olsen some extra information to relay to the Panthers or to use himself if he was able to play in that game. Green already received a $50,000 tampering fine for his comments trying to persuade Devin Booker to leave Phoenix on a NBA on TNT broadcast, and he’s made some perplexing comments about other NBA franchises as well. And this has come up in baseball as well, particularly with ESPN broadcaster Jessica Mendoza’s dual roles (since abandoned) with the Mets and the network, but also with the many team “special advisors” who also have broadcast roles.

Most recently, that shift of active athletes into the media world has extended to a lot of production company deals. Those include James’ “The Shop” (at HBO), Kevin Durant’s “The Boardroom” and its various incarnations at ESPN and Cadence13, the various Religion Of Sports efforts (often featuring Tom Brady), and Steph Curry’s Facebook Watch series and Unanimous Media company (which is behind ABC’s Holey Moley, the finest show on television, as well as various movies), and Rickie Fowler producing an Oklahoma State golf series for Golf Channel. Wilson has done this himself before, too, particularly with a NFL draft mentoring show on ESPN in 2018.

These production company deals do come with some issues of their own, at least from an appearance perspective. For example, is a Kevin Durant or a Russell Wilson more likely to tip off ESPN reporters than reporters at other outlets because of deals with ESPN? (It’s notable that the NBA CBA appears to prevent players like Durant from signing TV deals for extra compensation with local networks, but it doesn’t keep them from signing deals with national outlets.) Or are ESPN’s other pundits more likely to take it easy on Durant or Wilson given their relationships with the company?

Of course, the latter concern seems a little unlikely. Any ESPN management memo instructing pundits to be nicer to an athlete who has a relationship with parent company Disney would quite likely be leaked to the press and would produce far much more negative publicity than leaving people alone would. So if this does happen at all, it would probably be from commentators thinking they should be nicer to athletes with Disney relationships without any explicit memo telling them to do that. And most commentators probably do not think that way; they’re likely more concerned with expressing their thoughts as best as possible on air.

And given the amount of movement in the broadcasting ranks these days, it’s likely more advantageous for a commentator to come off as a good and honest analyst rather than a supporter of the corporate brand. There are some potential exceptions here, as when ESPN pundit Stephen A. Smith blasted his company’s own reporting in an attempt to suck up to sometime ESPN/ABC NBA panelist Magic Johnson, but even that’s likely more about Stephen A. wanting his own on-air experience with Johnson to be easier (it’s not like he’s ever complained about working conditions) than about being a good corporate soldier. And the commentary outrages perpetuated by Stephen A. Smith are generally not reflective of a wider norm for ESPN’s on-air discussions.

Overall, it seems likely that most of ESPN’s personalities who might comment on Wilson probably won’t even realize that he has an ESPN podcast deal, and the ones who do realize that probably won’t alter their commentary on him at all. And going back to Smith and Durant, it’s notable that Smith has antagonized Durant and his mother many times on air, and that didn’t stop Durant from signing a deal with another branch of ESPN. So the on-air commentary and the business deals aren’t always inextricably linked.

The former concern, of athletes providing favorable treatment to outlets who are paying them (theoretically for something else) is maybe a little bit more significant. But it still isn’t necessarily a proven thing. Yes, it’s absolutely conceivable that an athlete who has a business relationship with a network for some sort of off-the-field content might decide to give that network’s reporters scoops. There’s an understandable incentive there. But there are a few things to consider with that; for one, individual players really don’t have that many scoops that move the needle in a significant way (a free-agency destination would, but most other inside information wouldn’t), and for another, it doesn’t seem terribly likely that renew/cancellation decisions for shows factor in if the athlete/producer has tipped off the company’s reporters or not.

Breaking sports news and original shows with athletes are widely different departments even at ESPN. And that’s before you get into deals with other Disney properties. And who an athlete or coach chooses to tip off is already a commodified game to some extent, as athletes often tip off insiders who they think may be helpful to them. So even if this was actually happening regularly (which it probably isn’t), it likely wouldn’t change too much. ESPN reporters are still going to get a lot of NBA and NFL news regardless of if another branch of their company has a deal with the athlete in question.

In general, the concerns about current athlete deals with media outlets are understandable, and there certainly is some potential for conflicts of interest (real or perceived) there. But it’s a line that’s been crossed many times recently, whether with commentary spots or production deals. And one podcast from Wilson certainly isn’t the most significant crossing of that line. And it should be noted that even during the years where most active athletes didn’t also have commentary roles, there were always some exceptions, including the aforementioned columns (ghostwritten or not), autobiographies (which often came with ghostwriters, and sometimes came out while athletes were still playing), coaches’ shows, and some guest commentary spots on broadcasts.

So while current athletes’ deals with media outlets are a growing issue, they’re not a new one. That doesn’t make it totally fine, but at this point, the bridge of active athlete deals with media outlets has long been crossed, and no amount of complaining about the existence of these deals seems likely to reverse that. But it’s certainly smart for outside media and fans to stay informed of which athletes have deals with which media companies, and to draw attention to coverage by those companies that feels odd.

And perhaps the even bigger thing to keep an eye on there is when it comes to those companies’ coverage of leagues with which they have rights deals. Those deals are much bigger and much more important than any deal with an athlete for studio content. And while there hasn’t been a lot of specific evidence indicating favorable coverage for individual athletes after deals, there has been many particular cases discussed around networks’ relationships with teams and leagues.

This does not always extend to everything at the network; for example, it should be noted that some of the most significant reporting on big issues with the NFL and NBA has come from some branches of ESPN even while the broader company has deals with those leagues, and even when their coverage of the leagues on other platforms is under fire. But there are definitely concerns that have cropped up around networks’ coverage of leagues they have rights deals with. And that can go beyond just on-air comments; it’s always worth considering how networks handle leagues in terms of on-air scheduling, news/highlight/debate show coverage, and even social media posts about those leagues.

So the broader takeaway here is maybe for fans to be aware of what deals companies have, and to keep those deals in mind when considering those companies’ coverage. And that’s definitely true with both athletes and leagues And that will likely only become more important as these deals continue.