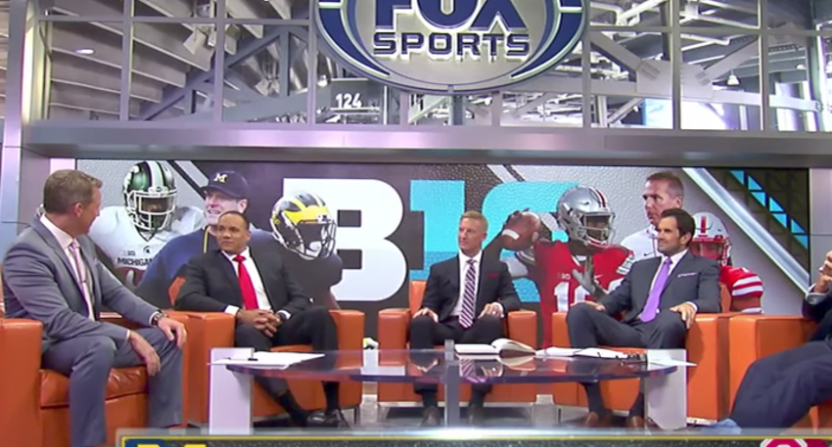 It’s long been anticipated that the annual Ohio State – Michigan football game would be moving to Fox following the network’s acquisition of the Big Ten’s Tier 1 rights last summer (the deal begins in 2017-18), as Fox now has first pick of Big Ten games and that game tends to draw the largest audience out of any in that conference, but that move now appears official.

It was predicted in our report on the new TV deals last June and in CBS’ report at the same time, mentioned again (this time as a done deal) in Anthony Crupi’s Advertising Age piece last month on Fox’s upfront preparations, and then actually confirmed by the network at their upfronts Monday, with quite a bit of promotion from Michigan head coach Jim Harbaugh and Ohio State head coach Urban Meyer (who appeared on a video call there for some reason) as well. Here’s the slide of their football schedule:

Looks like FOX is officially getting the Michigan-Ohio State game this year & some other huge matchups. pic.twitter.com/EPC4atvYbz

Other notable games there include Penn State-Ohio State, Notre Dame-Michigan State, Oklahoma-Oklahoma State, and Texas-USC. But it’s the Ohio State – Michigan  one that really matters. That game last year (with the Buckeyes ranked second and the Wolverines ranked third) drew a 10.4 overnight rating on ABC, the best of the college football season, the best noon kickoff rating on record, and the second-best regular-season CFB number in any slot ever for ABC (behind, shockingly, another Michigan – Ohio State game in 2006). It’s not going to hit quite those heights every year, of course, especially if one or both of the teams is struggling, but this is one of the most-watched matchups in college football regardless of the implications, and it can produce some mammoth ratings when the stakes are high. (Oh, and fans presumably get to listen to Gus Johnson call it now, so that should be fun.)

Having that game switch networks is a big deal, and that’s why Fox outbid ESPN for the Tier 1 rights ($240 million annually versus $190 million). Both networks will show the same amount of games each year (25 football and 50 basketball), but Fox gets the first pick every year (ESPN gets second, Fox gets third and so on), so they can take Ohio State – Michigan in perpetuity for the life of the contract (presuming they’d want to, but it seems unlikely anything else will come close in terms of ratings). The Tier 1 rights aren’t just about Ohio State – Michigan, of course; they also include the Big Ten championship game and a few other notable things. But grabbing this matchup is a huge part of why Fox was willing to pay more for what’s mostly the same number of games.

Interestingly enough, Fox also managed to get both Michigan head coach Jim Harbaugh and Ohio State head coach Urban Meyer on board for a video call at the upfronts to help sell this game to advertisers. And Harbaugh really went full tilt:

So, they got Meyer to promote Fox too, just maybe in not as an over-the-top way. And it’s interesting that Harbaugh would go all-in for Fox, which he doesn’t work for (and only some of Michigan’s games will be shown there; plenty may wind up on ESPN or ABC too). But hey, Fox went all in for him with the Harbus, long before they even won the Tier 1 Big Ten rights. Perhaps turnabout is fair play.