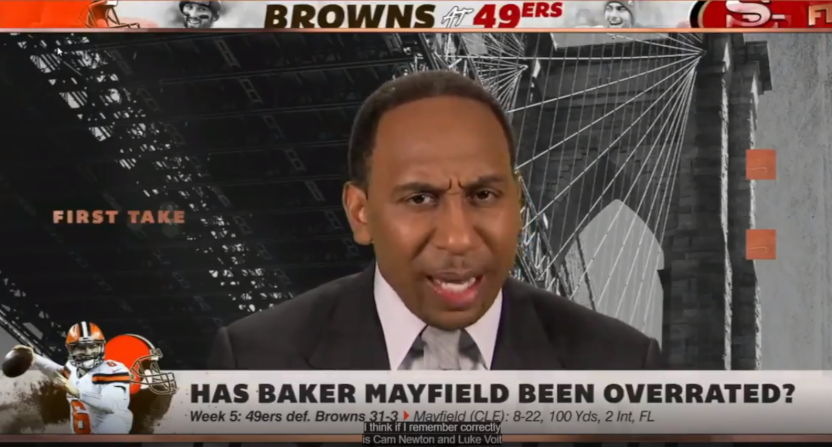 It’s been clear for a while that ESPN’s Stephen A. Smith makes plenty of mistakes when it comes to mentioning specific NFL players, whether that’s spotlighting the matchup of injured Hunter Henry against released Derrick Johnson, claiming Washington started punter Tress Way at quarterback, forgetting about Drew Brees, saying Kareem Hunt played for the Saints, or claiming that noted non-rushing quarterback Dwayne Haskins (then a NFL draft prospect) was “more of a runner than a thrower.”

The latest example of Smith’s NFL blunders came on First Take Tuesday, where he (shockingly!) bashed Baker Mayfield after the Browns’ loss to the 49ers, but claimed he only had a better QBR (it’s also shocking that Smith promotes an ESPN stat that no one else really cares about) than “Cam Newton and Luke Voit“:

“[Mayfield] has got a QBR right now of 30, 29.8 to be exact. And oh, by the way, the only people that are worse than him are, I think, if I remember correctly, Cam Newton and Luke Voit. And Cam Newton is hurt, and Luke Voit, I didn’t even know who the hell he was until guys got injured.”

It appears that Stephen A. still does not know who the hell Luke Voit is, because the answer is not “the quarterback for the Jets.” That would be Luke Falk, who wound up starting this week thanks to Sam Darnold and Trevor Siemian both being out (and starting on one day of first-team reps, to boot). The Jets lost that game 31-6 to the Eagles to fall to 0-4 (you can see why Smith’s ESPN colleague Steve Young was less than excited about having them on Monday Night Football in two weeks), which is something you’d think a prominent New York-based pundit would be aware of.

And Smith really should be aware that Voit is the first baseman for the Yankees, who are doing quite a bit better than the Jets at the moment. Then again, Smith is not known for his baseball knowledge either; he tried to claim earlier this year that Mike Scioscia was still the Angels’ manager. It’s just less obvious how little Smith knows about baseball because he doesn’t try to talk about it, unlike the NFL. But hey, it’s real great that ESPN wants to promote him nationally for four hours a day (two on First Take, two on his radio show) so he can tell us all about NFL quarterback Luke Voit.