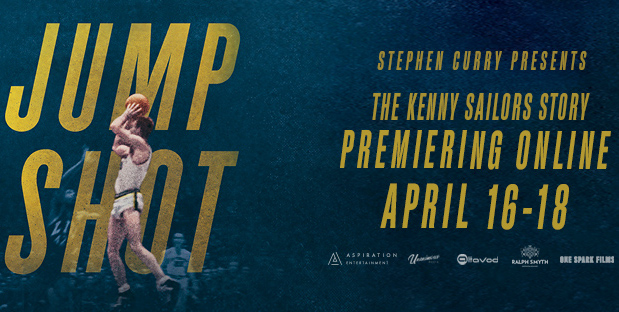 Back in February, Jump Shot (a documentary on Wyoming basketball player Kenny Sailors, who did a lot to popularize the outside jump shot while leading the Cowboys to the 1943 NCAA Tournament final) announced that it would be airing in theaters nationwide in a one-night-only event on April 2. Well, the shutdown of theaters in response to the COVID-19 coronavirus pandemic meant that that didn’t happen, but the movie (directed by Jacob Hamilton and executive produced by Steph Curry) will now premiere online from April 16-18, with 10 percent of the proceeds going to COVID-19 relief. Here’s more from a release:

Introducing his never before seen ‘leaping one-hander’ to the masses on a national level, Kenny quickly grew to be a fan favorite while leading his Wyoming Cowboys to the NCAA Championship in Madison Square Garden in 1943. But after serving his country in WW2  and playing in an unstable, emerging league now known as the NBA, Kenny disappeared into the Alaskan wilderness only to be forgotten by the sport he helped pioneer. Now, nearly sixty years later, the multitude of people he has touched along the way have forced Kenny’s humble reemergence. Kenny was not only an NBA pioneer, but also a coach, high school teacher, champion for female athletes, marine, true cowboy and homesteader in the Alaskan frontier, a father, husband, and man of faith.

“Ever since I picked up a basketball, the jump shot was second nature to me,” says executive producer and NBA superstar Stephen Curry. “Learning the history of where the art of the jump shot came from, who introduced it to the game, and how it changed the game, was incredibly intriguing. Even more importantly, learning about the person that Kenny was, and what he stood for, was very inspirational. He was a selfless, special person that had the right perspective about life. The film not only explores his impact on the game, but his calling and all the different places that took him, whether it was serving in the military, or playing in the NBA, or being with his family. There’s so many people like myself that don’t know Kenny Sailors, and I’m proud to help share his story with the world.”

Hamilton has been working on this project since 2011, and recently spoke to Cameron Fields of USA Today‘s Warriors Wire about it. Some particularly notable comments there are about why this story interested him so much, and why he felt it was worth developing into a full-length documentary:

To me, Kenny lived a life that’s worth celebrating. I think that’s ultimately why this film has grown to what it is today. And a lot of that is because of what he did on the court, but in all honesty I think what catches people’s attention — it catches them off by surprise while watching the film — it’s really what he did off the court that is so inspirational. In a way, one could argue he defined the game of basketball by developing the primary offensive weapon of the game. But it never really defined who he was. And so when he retired from basketball, or what led to his retirement of basketball, was his love for family. His wife had kind of fallen ill and was sick. They needed to relocate their family basically for her health. And so once he was able to get his pension, he was like, ‘OK, we’re going to focus on that. And we’re going to do this as a family.’

And then when he moved away from the spotlight of basketball, it didn’t take very long for basketball to catch back up with him, because then all of a sudden he’s asked to be a coach in the middle of nowhere in Alaska for women’s basketball and plays a huge part in being a pioneer for women’s basketball up there in the public schools of Alaska. There was no state tournament at that time, only the private schools, and a lot of women, and specifically native women up there, didn’t have the opportunity to play. And so he brought the game to them. It’s stories like that where I think a lot of people come in expecting one thing from this film, and they’re pleasantly surprised that there’s a lot more to it. And I think those are always the most exciting documentaries to me. When I’m watching something expecting one thing, and then I walk away from it being like, ‘Wow, I didn’t know I needed to learn about this, but I’m so glad that I learned something new.’

Jump Shot premiered at SXSW in 2019 and has won some significant awards, including Grand Jury Prize for Best Documentary at deadCENTER Film Festival and the Audience Award at Heartland International Film Festival and Hill Country Film Festival.  It will be available for $7.99 and will include exclusive programming from Curry, Hamilton, and other special guests.

The documentary can be pre-ordered now at jumpshotmovie.com.