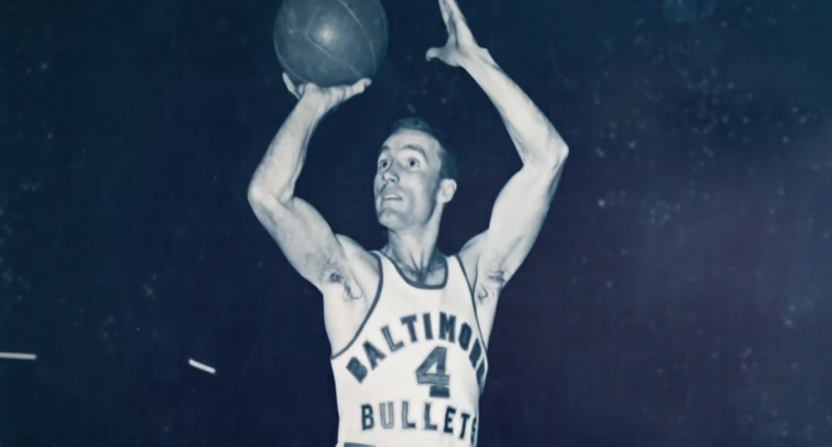 Basketball without the jump shot seems unimaginable nowadays. The three-pointer, especially, has become a key part of the game at all levels. Players big and small developed greater outside shooting skills.

Analytics have also determined that a shot worth three points converted with a certain amount of accuracy has greater value than attempts closer to the basket. Outside shooting has taken on even more importance as fewer skilled big men populate basketball.

A new sports documentary aims to tell the story of the man viewed as the pioneer of outside shooting. Jump Shot follows the career of Kenny Sailors, who popularized shooting farther from the basket with a play that wasn’t the flat-footed set shot (often taken with two hands) most players had utilized. Sailors and his jump shot led the University of Wyoming to the 1943 NCAA men’s final.

Jump Shot will be shown in theaters nationwide for a one-night special event on April 2. Tickets can be purchased at http://www.jumpshotmovie.com/ or through the Atom Tickets website and app.

Perhaps it shouldn’t be a surprise that Jump Shot is executive-produced by Steph Curry and his company Unanimous Media. Curry has arguably been the face of a more wide-open NBA in which offenses are built largely around the three-point shot, led by sharpshooters who can convert it with more than 40 percent accuracy.

As seen in the trailer, the film includes interviews with several players whose outside shooting skills made them stars, including Dirk Nowitzki, Kevin Durant, Nancy Lieberman, and many others, in addition to players who became broadcasters like Clark Kellogg and Tim Legler.

Sailors did play five seasons of professional basketball in cities including Cleveland, Providence, Baltimore, and Denver, but leagues like the Basketball Association of America and the NBA were in their early days and struggled to catch on. His career also had a late start due to serving in World War II. (It should be noted that basketball historians largely credit John Miller Cooper as the inventor of the jump shot, though Sailors’ success made the play more popular among players, fans, and media.)

I am so excited to announce that today, tickets go on sale for our award winning film “Jump Shot: The Kenny Sailors Story.” A powerful story about a true champion of sport, family, faith, community and female empowerment. https://t.co/QrURujoxgq https://t.co/DGXOfTtrHm

Jump Shot premiered at the 2019 South by Southwest Festival in 2019. Soraya Nadia McDonald reviewed it at the time for The Undefeated. The film, directed by Jacob Hamilton (who initially developed Jump Shot as a short film before expanding it to a feature-length documentary), has earned recognition at several screenings, including the Grand Jury Prize at Oklahoma City’s deadCENTER Film Festival.

Sailors passed away in 2016 at the age of 95. But if you’d like to read more about him, his development of the jump shot, and his basketball career in anticipation of the documentary, his story has been featured by several outlets, including:

The one-time showing on April 2 will also include exclusive content from Curry and Hamilton, in addition to other special guests to be featured following the film.