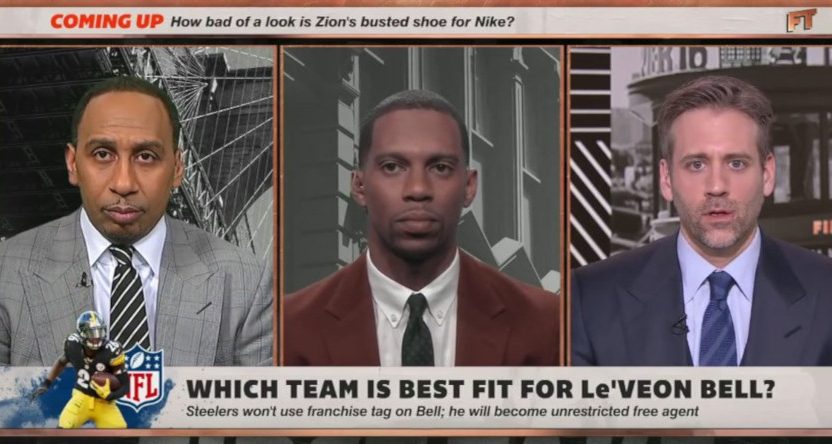 It’s been quite the recent run for Stephen A. Smith’s many counterfactual assertions and remarkable omissions, and he delivered new examples on both those fronts Thursday. First, on First Take, Smith suggested the Carolina Panthers as a destination for Le’Veon Bell. When Max Kellerman pointed out that Carolina already has a prominent running back in Christian McCaffrey, Smith responded with “But they don’t have receivers. And Le’Veon Bell is what I’m thinking.”

Stephen A. Smith just completely forgot that Christian McCaffrey was on the Panthers and says they should sign Le’Veon Bell. Then tried to justify it by saying the Panthers don’t have “receivers.” #Panthers pic.twitter.com/xQJ532HyA4

For what it’s worth, the 867 receiving yards McCaffrey posted this season is above Bell’s career-high of 854, which came in 2014. So yeah, that seems to be the latest case of Smith not really paying attention to the NFL, and forgetting that Carolina had McCaffrey.

But an even more glaring misstep came later in the day on his radio show, where he blatantly got the NBA’s rule (the sport he’s supposedly really an expert on!) about the minimum age for the draft completely wrong. The segment below can be found at the 11:40 mark of the show’s podcast here (MP3), where he’s talking about Zion Williamson and the draft.

This starts with Smith bashing those who suggested Williamson should sit out the rest of the year to prepare for the draft, then seguing into criticism of what he thinks the rule is:

“What the hell is wrong with y’all? Y’all ever heard of teamwork? Y’all ever heard of team? There might be an I in win, but there’s no I in team. I don’t have any problem with Zion Williamson not showing up to Duke, sitting out the year with this bonus 19-year-old or one year removed from high school rule before entering the NBA that the NBA has conveniently implemented. They should get rid of that rule tomorrow! Players should be able to come straight out of high school into the pros if they have the capability to do so, period!”

“And the rule is unjust because it essentially, and unintentionally I might add, because I’m certainly not accusing the NBA of malicious intent in this regard, but the rule is essentially discriminatory! If I got to be 19 years of age or one full year removed from high school before I enter the NBA draft, that rule is not applicable to European players, to players from Europe! That rule is not applicable to them!”

Actually, Stephen A., that’s not how the rule works, as Wikipedia can tell you:

The basic rules that started in the 2006 draft are:

The “one year out of high school” requirement is in addition to the age requirement. For example, although O. J. Mayo turned 19 in November 2006, six months before his high school graduation, he was not eligible until the 2008 draft, a year after his high school class graduated.

So, yes, international players do not have to meet the “one year removed from the graduation of his high school class” standard, and there’s an argument that maybe that’s unfair in cases like Mayo’s. But it’s completely wrong to say that Doncic “could have came over here as a 17- or 18-year old.” And Smith should know that; ESPN has long held him up as an authority on the NBA, even using him on draft coverage (where he received some deserved heckling), so this isn’t a case of him being “stretched too thin.” It’s a case of him not having a clue what the actual rules are for a league he’s supposedly an expert on. And that’s just the latest example of how Smith is more about being loud than being right.

But there are a whole lot of those:

[The Stephen A. Smith Show; thanks to reader Ken for the tip. Screencap from Douglas Charles.]