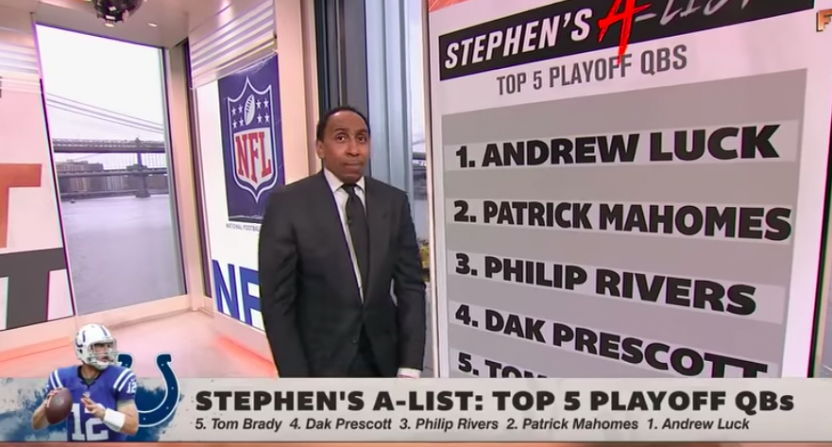 Stephen A. Smith is clearly aware of who New Orleans Saints quarterback Drew Brees is.He’s been effusive in his support of the QB many times over the years. He’s been involved in any number of absurd yelling matches about Brees’ merits and career. He even wore Brees jersey recently during a First Take bit trolling Dallas Cowboys fans in attendance. By all accounts, whenever Smith thinks of great NFL quarterbacks, you’d assume his mind immediately goes to Drew Brees.But, as you probably have guessed, that is not what happened Thursday on First Take. Smith was presenting his list of the top five quarterbacks left in the NFL playoffs. Since Stephen only had eight QBs to choose from, it seemed like a pretty straightforward affair.He started with New England Patriots’ quarterback Tom Brady, whom you never count out, at No. 5. At the No. 4 spot, he went with Cowboys slinger Dak Prescott which, well, let’s just keep going. At No. 3 he went with San Diego Chargers QB Philip Rivers, which seems fine. Patrick Mahomes checked in with the No. 2 spot, which surprised some who think the Kansas City Chiefs quarterback is the true phenom breakout of the season. But, we suppose, knowing the Drew Brees would be No. 1 would at least give us a frame of reference for what Stephen A. is thinking. Except…https://twitter.com/seanjwagner/status/1083487009832747008Stephen went with the Indianapolis Colts’ Andrew Luck as his No. 1 overall quarterback left in the playoffs. Altogether, that is one curious-as-hell list. Of course, it’s hard to think that any ranking of the remaining QBs would satisfy everyone. But to leave Drew Brees, he of 3,992 passing yards and 36 total touchdowns at age 40, off the list entirely, seems like a huge mistake.And that appears to have been what happened to Mr. A. Smith.https://www.youtube.com/watch?v=gXzGjqo86JMAfter unveiling his list, the First Take crew gathered to discuss the top five in what quickly turned into a “what are you talking about? ambush on Smith for his choices. Specifically, the choice he didn’t make. Smith barely even gets comfortable in his seat before co-host Max Kellerman reminds him how insane it is that Brees isn’t on the list, to which Smith replies, “Yes, I know…I know…I just forgot about him.””Brees was a total mistake. A slip-up on my part. I actually thought I had him on the list. I just forgot.”Smith then goes on to push back against the idea that Tom Brady doesn’t belong in the top five, even though he’s just admitted that Brees was supposed to be in there….which would have pushed Tom Brady out of the top five. He then tried to play it off that he “took it for granted” that Brees will win the Super Bowl this year, so he didn’t even need to put him on the list.Sure, Stephen.Ultimately, it’s a harmless bit of schadenfreude for SAS haters. But, look, if you’re gonna be the guy on TV shouting all the time and spouting your opinions like facts, you’re gonna get called out when you messed up.[ESPN]