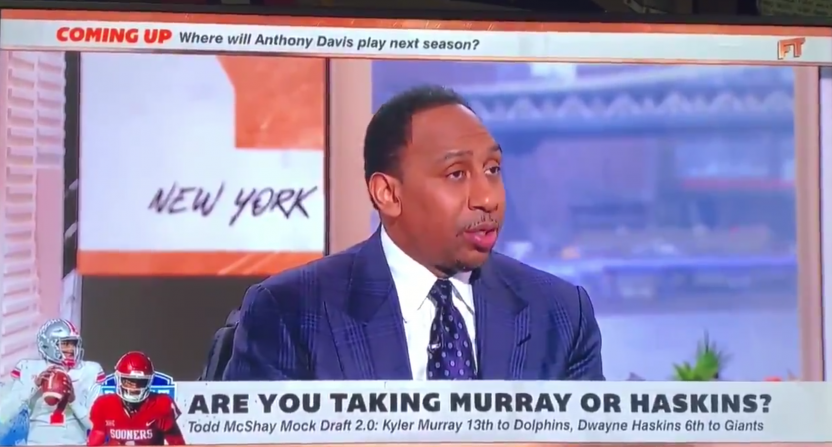 Most people (rightfully) abhor Stephen A Smith. Unfortunately though, enough people pay attention to him that ESPN believes his presence moves the needle. Thus, he’s parachuted onto as many shows and platforms as humanly possible, instead of being quarantined away from sports fans who avoid his main gig, First Take.

Man, I like to poo poo all over national media like everyone else, but ESPN is killing any credibility Stephen A Smith has left by running him completely ragged. THE DUDE NEEDS A DAMN BREAK.

With Stephen A’s workload increasing, there’s been a growing trend of him getting caught talking out of his ass about sports he really doesn’t know or clearly give a shit about. That’s not uncommon in the sports media world at all, but it’s become so regular and so egregious with Stephen A that you have to start wondering at what point ESPN begins to to think about the right balance of platforms and topics Smith limits himself to.

Right now, he’s more or less a hungry stoner walking the aisles of 7 Eleven, grabbing whatever he can while often knocking over displays and spilling a slurpee all over the floor.

In which Stephen A. Smith says that Dwayne Haskins is “more of a runner than a thrower.” pic.twitter.com/Gtowi8y0Pp

Let’s talk about that.

Actually, we don’t need to.

At face value, this a ripe topic to talk about on any general sports show. As I type this right now, NFL Live is discussing this very topic with other people who, from what I can tell, know what the fuck they are talking about. Which QB will be the first one off the board in the NFL Draft is an annual topic, and it’s not easy to screw up your pick. Pick a guy, explain why. Not hard!

But Stephen A can’t even do the most basic analysis here. He, once again, steps on his own dick, with another viral moment showing that he just doesn’t know shit about football. This isn’t us cherry picking an isolated incident, either. Just last month, he “forgot about Drew Brees” when making a list of the top QBs in the playoffs. I mean, only 12 teams are in the playoffs, and this list was made after the Wild Card round. How do you do that? Why doesn’t a producer step in here and remind Smith that there’s a future first ballot Hall of Famer and MVP runner-up quarterbacking the number one seed in the NFC?

Here is the reality about Stephen A: he’s stretched too thin through his daily radio show, First Take, SportsCenter hits, a variety of NBA shows, and both boxing and MMA live event coverage. He wants to do everything, everywhere, and because ESPN fears he could go elsewhere if they don’t accommodate him, they let him roam free and spit takes, wherever and whenever he wants. The end result is that he looks like an idiot with increasing frequency, and people are noticing.

ESPN & Stephen A Smith are prime ex. of what Corporate American has become. Let's push, push, push to do more with less. It's clear this guy is exhausted. They have him covering too many sports including boxing, TV show, radio shows. At this point it's sit in the chair and go.

This is starting to get ridiculous @espn. Does Stephen A. do any research before going on air? You would think that a guy making 3 million dollars a year would do his homework. https://t.co/WIbWo3Twbt

I know ESPN got Stephen A. working 80 hours a week but this is just the most ignorant take ever https://t.co/kqSTR9M59A

ESPN really has Stephen A doing way too much. His NBA takes are generally very very good. But he just doesn’t have the time to keep up with football, particularly college football

It’s not the end of the world that the average person in your fantasy football league knows more about the NFL and college football, not to mention less covered leagues like MLB and NHL, than Stephen A. Perhaps he could be a more palatable personality if he had more time to prepare, or was fed some more accurate talking points by producers and researchers.

But that’s not the case: the guy works too damn much (or perhaps is too arrogant) and refuses to just avoid certain topics or admit he doesn’t have a take on something. That’s because he’s Stephen A Smith, and EVERYTHING HE SAYS IS IMPORTANT.

When is First Take’s producer going to step in? When will ESPN realize that running him out there for so many hours a day, when he’s already stretched so thin, is sullying not only his dwindling reputation, but also that of the company as a whole?

I would have thought the last few months would have drawn enough embarrassing attention to Smith that ESPN would attempt to do something with his workload. But the reality here is that alarms are not going off in Bristol, and I think rather that seeing less of Stephen A Smith in 2019, we’ll be seeing him pop up on ESPN’s Frozen Four coverage in a few months, picking Oklahoma over Stanford.

Stephen A would flex his multi platform abilities to Twitter where he continued to shit himself.

Shaq is big time. I know this. And I’m not saying he CAN’T dunk. But I view him as more of a free-throw shooter. An eye-test thing. https://t.co/EQshYBHYkv