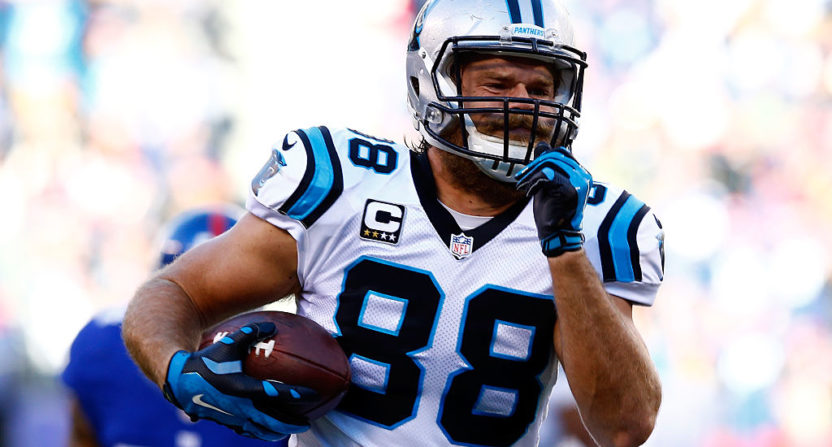 Typically, when a network needs a game analyst, it scours the ranks of the recently retired, searching for talented former players to lend some insight to their broadcasts.

But for the November 19 Rams-Vikings game, Fox has gone with a different approach. The network announced Thursday that it will enlist injured Carolina Panthers tight end Greg Olsen as a game analyst that afternoon in Minneapolis. Olsen, who is out for the season and whose team will be on a bye, will join Kevin Burkhardt and Charles Davis in the booth.

According to Fox, Olsen will be only the third active player ever to work as a game analyst for the network, joining Matt Hasselbeck in 2014 and Marcus Allen in 1994. The Panthers tight end is well-spoken and well-regarded in the league, and the foot injury he suffered in September means he doesn’t have much else to do during his team’s bye week. At 32 years old, his career won’t likely last too much longer (though he remains a productive pass-catcher), so this role offers him an opportunity to test drive a potential post-playing career.

As we’ve seen with Tony Romo, proximity to the league can be a valuable asset for an analyst. Olsen has played against many or most of the Rams and Vikings players he’ll be commenting on and possesses first-hand knowledge of contemporary NFL scheming. That should allow him to speak about game action at a deeper level than analyst who are further removed are capable of. Fox Sports exec John Entz made that very point in a statement Thursday.

“We are really looking forward to having Greg join our coverage,” Entz said. “As a current player, his unique insight and knowledge of today’s game and players provides a great addition to our broadcast.”

It might be interesting to watch whether Olsen is forced to temper his analysis in any way by virtue of being an active player. He presumably won’t want to give away any of Carolina’s secrets, and he also might be hesitant to criticize players he could later play with or against. Will that downside of an active player in the booth outweigh the upsides? We’ll find out next weekend.