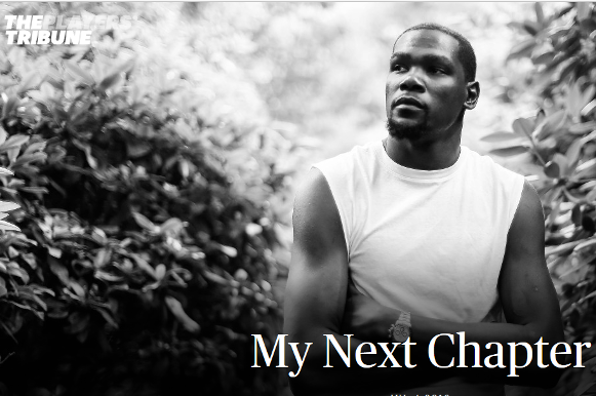 Hosting superstars’ free agency announcements can be extremely beneficial for media outlets. ESPN found that with LeBron’s 2010 “The Decision” broadcast (which drew almost 10 million viewers, although it did bring significant criticism as well), Sports Illustrated found that with LeBron’s 2014 decision letter (part of the 20 million uniques SI drew that May, a 49 per cent year-over-year boost), and now The Players’ Tribune has found it with their hosting of Kevin Durant’s announcement Monday that he was headed to the Golden State Warriors.

According to Liz Mullen of Sports Business Journal, Durant’s piece brought in major traffic. TPT had 25,000 active users on the site before it broke, 150,000 within one minute of its breaking and 300,000 within ten minutes. The site pulled in 4.5 million page views Monday and 2.56 million uniques, and they got 800,000 homepage views and 77 per cent new users. They were even the third most popular search on Google, and while there were reports of the TPT site crashing thanks to traffic load, TPT’s Raphael Poplock told Mullen those crashes were quickly addressed:

TPT Exec VP/Partnerships & Business Development Raphael Poplock in an email wrote, “While some users may have experienced brief, intermittent outages, all were corrected within 15 minutes after the story posted.” …“Kevin’s announcement is yet another example of how players are using TPT as a trusted platform to share news and stories and control their message,” Poplock wrote. “The anticipation of the announcement generated significant interest across the site and our social channels, which carried throughout the day.”

This is yet more proof that news of where players are headed has value, and it’s a further step in players controlling and participating in the commoditization of that news. That’s not necessarily a bad thing; these are these players’ decisions, after all, so why shouldn’t they get to play a role in how that news gets out? This is also something that really feels like a perfect fit for The Players’ Tribune, as it offers players a huge amount of editorial control (and doesn’t raise the questions that are asked when more traditional media give up that kind of editorial control) and a forum where they can particularly tailor their message the way they want. TPT has sometimes been derided as “athlete press releases” (which isn’t entirely fair, especially given that many athletes present honest detail there in a way you wouldn’t see in a press release; short-form “athlete autobiographies” may be more apt), but a free agency announcement is a perfect press release, and why shouldn’t players get to break that and benefit from it instead of, say, a team website or a third-party reporter/media outlet?

That’s a challenge for the rest of the media, of course, and one they’ll have to deal with. Some ways to do so might be by offering players more of a platform, by finding non-player sources for news, and/or by finding and presenting alternate content forms such as quick analysis that offer their own value. Those are doable, though, and there’s no reason to say that independent media should have a right to this content or that TPT shouldn’t be able to compete for it. It’s hard to blame Durant for taking his talents to The Players’ Tribune, even if the format he eventually wound up with was parodied by everyone from Frank Caliendo to Mark Titus and Shea Serrano. It’s Durant and his fellow athletes who really should be laughing, though. They’re now finding ways to make news about their movements benefit them, and TPT is a perfect candidate to host this kind of news.