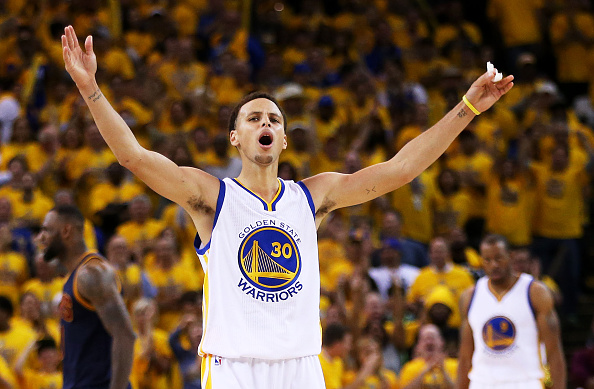 Following LeBron James producing obstacle course series Million-Dollar Mile for CBS, ABC is jumping into the ring with its own competition series produced by a NBA player. This time, the NBA player in question is Steph Curry (or “Stephen,” if you go by the very-serious release), and the competition in question is…”extreme mini-golf”? And Joe Tessitore and Rob Riggle are calling it, with sideline reporter Jeannie Mai (from Today and The Real)? Okay then! The 10-episode series will begin production this month, with an airdate to be announced later.

Here’s more from the release:

“Holey Moley” will focus on the family-favorite game of mini-golf with a twist. In each episode, 12 contestants will put their miniature golf—and physical—skills to the test and face off in never-before-seen challenges on a larger-than-life course. Mini-golf experts of all ages and backgrounds will try their luck on “Holey Moley”‘s supersized holes. Every episode will consist of three rounds of golf, culminating with three finalists taking on the daunting “Mt. Holey Moley” in a three-way contest. Ultimately, one winner per episode will take home the $25,000 prize, along with “The Golden Putter” trophy and coveted “Holey Moley” plaid jacket. Uniquely themed holes will be featured every week, along with special celebrity guest appearances and other surprises along the way.

“Everyone has a favorite memory of playing miniature golf, whether it was as a child with your family, with a group of friends as a teenager, or on an awkward first date. Take that feeling, add high stakes competition and out-of-this-world challenges, and we have no doubt ‘Holey Moley’ will stand alongside other golf classics like ‘Caddyshack,’ ‘Happy Gilmore’ and ‘The Legend of Bagger Vance,’” said Rob Mills, senior vice president, Alternative Series, Specials and Late Night, ABC Entertainment.

“Unanimous is incredibly excited to partner with ABC on ‘Holey Moley,’” said Jeron Smith, co-founder and CEO of Unanimous Media. “We aim to use entertainment as a vehicle to bring families together, and this show will surely bring laughter and enjoyment to households around the country. Miniature golf is a staple pastime and the show will be fun, intense and unpredictable. Our collective love of sports and family-centric entertainment made this a perfect project for our first television series. We’re excited to see what the competition brings.”

“Eureka is thrilled to be working with ABC to take America’s love of miniature golf to the next level. It’s extreme and perfect family-fun. We can’t wait to unveil the most spectacular mini-golf course ever created” said Chris Culvenor, co-founder and co-CEO of Eureka. “Teaming up with Stephen Curry and Unanimous Media makes it even more special. Stephen has changed the game of basketball forever, so we are beyond excited to join forces with him to transform miniature golf into an epic event.”

Those are some bold claims, especially that this will stand alongside Caddyshack and Happy Gilmore. But hey, silly competition shows can be fun, and Curry has more involvement here than just a producer credit; beyond serving as executive producer, he’ll be “the resident golf pro of the “Holey Moley” course and appear in every episode.” (Which is interesting with production beginning this month; presumably they’ve figured out how to work around Curry’s NBA playoffs schedule.) So that’s more on-camera involvement than James has with Million Dollar Mile.

And Curry is engaging on camera (as shown with the premiere of his upcoming Stephen Vs. The Game Facebook Watch show), and quite into golf (he plays in the American Century Celebrity Golf Championship at Lake Tahoe most years, and has done pretty well), so an “extreme mini-golf” show might be a good fit for him. Unanimous Media is his production company, too, so he has a fair amount of involvement in the overall product. The other additions here are also interesting; Tessitore makes sense given ESPN and ABC’s shared ownership, but bringing in a Fox personality in Riggle is unusual. But hey, if anyone’s fit to be a color commentator on extreme mini-golf, Rob Riggle is.

We’ll see how this turns out, but maybe “NBA stars producing sports-ish competition shows” will become a whole thing. Perhaps Kevin Durant can follow The Boardroom with a series on laser tag, or James Harden can do one on go-karts. At any rate, we’ll get to watch Curry instructing extreme mini-golf competitors sometime soon.