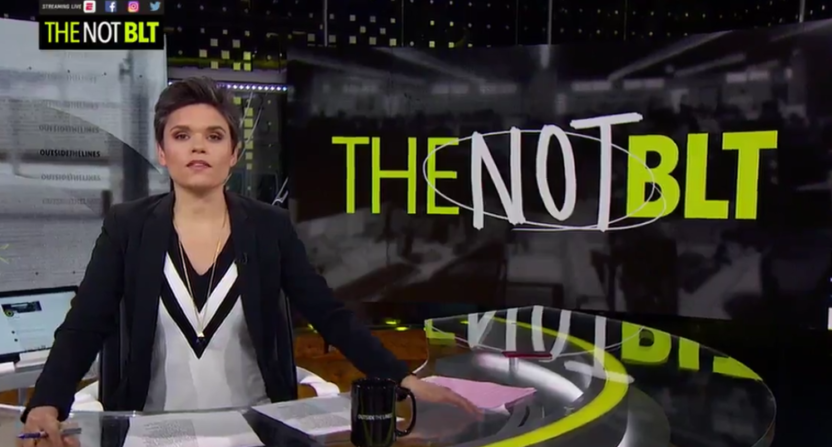 Wednesday saw a weird sports media story, with a James Warren column at Poynter that was later picked up by Vanity Fair featuring director Rebecca Carpenter discussing her new Requiem For A Running Back movie on concussions and CTE and saying that ESPN hasn’t done in-depth NFL concussion coverage thanks to their relationship with the league. In particular, she said “Fast forward to 2017, where ESPN is paying more than $7 billion to broadcast professional sports, and bringing in $6 billion (at one point revenues were as high as $10 billion). It’s hard to envision a media corporation that’s making billions off of a sport also doing investigative reporting that exposes the catastrophic dangers of their cash cow.”

The problem with those comments is that ESPN has done a whole lot of investigative reporting on the NFL and concussions, and has regularly covered the topic on their studio programming, including Outside The Lines. In fact, Carpenter appeared on that show last week to promote her film. So those comments understandably ruffled some feathers in Bristol, and Kate Fagan delivered an on-air response at the end of Thursday’s OTL, providing her own version of the show’s regular Bob Ley Take segment. ESPN also shot back with a memo to Poynter from Chris Buckle, who supervises investigative journalism at ESPN; Poynter published an edited version of that memo here. , plus an apology and clarification from Carpenter, and an update to their piece. But first, here’s the on-air response, where Fagan showed clips of some of OTL‘s concussion coverage over the decades, discussed the inaccuracies in Carpenter’s comments,and mentioned that her take here was “pre-approved by Bob.” Ley later retweeted the segment with a “the proof is in the pudding” comment:

The “proof is in the pudding” and the pudding is awfully tasty today. pic.twitter.com/kfOrhYl7Sr

Some key comments from Fagan:

“[There’s] coverage on ESPN and Outside The Lines regarding the NFL and brain injury impact dating back over 20 years. And Bob tells me from his personal experience that our reporting is a point of civil but continuing friction between ESPN and the NFL.”

And here’s a key part of the memo from Buckle Poynter printed:

I have been fortunate to have been a manager and editor at some of the nation’s largest media organizations (Dallas Morning News, USA Today) and some of the smallest (Portsmouth Times, Bridgewater Courier-News) and can honestly state I have run into less editorial interference at ESPN in getting out investigative journalism than at any of my prior stops. Please consider that statement for a moment, because it’s quite a strong, if for no other reason than to understand that ESPN is or has been business partners with virtually every sporting entity out there. We have published or aired hundreds of investigative or critical stories involving current business partners, from the largest – the NFL, MLB and NBA – to the some of the smallest – CrossFit and the AAU, for example.

Because it is clear neither Ms. Carpenter nor Mr. Warren has read any ESPN coverage of NFL issues, please indulge a small sampling of ledes and nutgraphs from recent ESPN stories about brain trauma and the NFL alone:

Those examples continue for a while, and Buckle then finishes with “As noted, this is a small sampling of our work in this subject matter. I would be happy to provide a full listing if you’d like. My colleagues and I have published and aired dozens of similar NFL stories over the past decade, and we are proud of them. Even the fiercest of ESPN critics regularly acknowledge our work in this area. Our coverage has won the highest of honors, too: Emmys, a duPont, a Peabody Award and many others.”

Carpenter and Poynter have both apologized. Here’s Poynter’s apology:

In the interview, Warren allowed Carpenter’s assertions about ESPN to go unchecked, leaving readers with the impression that ESPN had not been aggressive in covering the issue because of its business relationship with the NFL.

Because we value clarity, and wish to rectify this lapse, we are publishing Buckle’s documentation of his network’s coverage on the issue. We also published this story, in which Carpenter sets the record straight.

She said that reporters at ESPN “have contributed vital reporting to this important topic and I regret that my statements suggested otherwise. It was certainly not my intention to disparage any individual reporter or the beautifully executed and investigated documentary, ‘League of Denial.'”

“Collectively, these investigative reporters have made a vital contribution to my community’s understanding of this disease, and we all owe them a debt of gratitude,” she said.

Carpenter said that in discussing ESPN originally, she was alluding to “a number of articles in the New York Times (including an August 2013 New York Times piece, ‘NFL Pressure Said to Lead ESPN to Quit Film Project’) which described ESPN’s response to pressure from the league to distance itself from ‘League of Denial,'” a book and documentary based on work by ESPN reporters Mark Fainaru-Wada and Steve Fainaru.

“Given my personal familial experience, and my conversations with other families and researchers, I found this notion chilling. I’m truly sorry if I misunderstood the actual dynamics of this and fully acknowledge that ESPN has, in fact, covered ‘League of Denial’ and reported extensively about CTE.”

…”I hear constantly from people on the frontline of battling and researching CTE that there is a strong resistance to this meticulously researched and well-documented degenerative neurocognitive disease.”

“I am frustrated and chagrined about the reports I get from the medical community and others who know this unique disease is caused by repeat blunt force trauma to the head. I am also very familiar with the fears they express about reprisal.”

“That is the ‘we’ I was referring to. But it is my fervent hope that ESPN and others in the media continue to press this issue so we can all work together to save lives. The ESPN investigative team and I are on the same side of this issue.”

Warren also apologizes personally in that piece, and that piece is also notable for its publication of a response Fainaru-Wada sent to Carpenter:

As for reporters being scared of the league, Fainaru-Wada wrote Carpenter, “I would love to know more about these reporters and the CTE-related stories they struggled to get approved; as someone at our place in the thick of writing about these issues, I have NEVER experienced anything suggesting we not do these stories because of fears about the NFL. And I don’t know a single individual in our very large investigative unit who is fearful of ‘pissing off the league.'”

It’s highly unusual to see ESPN engage with media criticism of the network to this degree, but this is a highly unusual situation. There hasn’t been much criticism of ESPN’s concussion coverage (apart from their pulling out of a partnership with PBS for League Of Denial, but that was one instance several years ago involving some dubious corporate logic, and ESPN journalists were still involved in that final product), and for good reason; ESPN has often led the way on concussion stories, and that’s been a point of reporting pride for the network. Seeing a prominent concussion documentary’s director take unjustified potshots at them this way had to rankle, especially as they’d so recently given her a platform, and seeing media outlets like Poynter and Vanity Fair that should know better spread those accusations with inflammatory headlines and no comment on the reporting ESPN actually does didn’t help.

These seem like an appropriately measured response from Fagan, Buckle and Fainaru-Wada, too. Fagan’s on-air comments are logical, don’t get personal, and most of it is a simple display of clips proving how wrong Carpenter was. There are many cases where it makes sense for ESPN not to comment on what others are saying about the network, but addressing these particular charges seems logical given the importance of concussion reporting at ESPN, and they dealt with them in a smart way. (It’s also interesting to hear Ley say to Fagan that OTL reporting is “a point of civil but continuing friction between ESPN and the NFL”; there’s long been speculation to that effect, of course, but it’s notable to have it on the record.) Buckle’s memo is a little more pointed, but also very valid, and its citation of all the ways Carpenter and Poynter missed is notable, as is Fainaru-Wada’s response that ESPN’s investigative reporters aren’t worried about the NFL.

This doesn’t need to turn into an ongoing thing, especially now that Carpenter and Poynter have apologized. Those apologies do still illustrate the flaws with this in the first place;  how did Carpenter, the director of a film about concussions, base her entire knowledge of ESPN’s vast concussion reporting on a New York Times piece from four years ago about one specific incident? And how did Warren, an experienced media writer, not realize that those comments would create a stir and either push back against them or add context into his piece? Mistakes happen, but those are big ones. In any case, though, the on-air response from Fagan and the off-air response from Buckle help show just how much ESPN does cover concussions, claims from Carpenter and other media outlets notwithstanding.