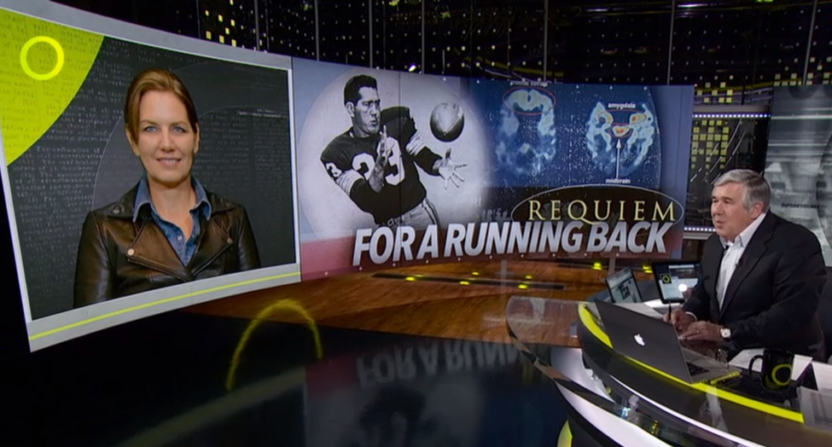 It’s quite a world where the director of a film on NFL concussions and chronic traumatic encephalopathy (CTE) can ignore the detailed reporting on the concussion crisis from ESPN (particularly from Mark Fainaru-Wada and Steve Fainaru, in Outside The Lines written and video pieces, the League of Denial book and the PBS League of Denial documentary, but also from many other ESPN journalists) and suggest they’re not “doing investigative reporting that exposes the catastrophic dangers of their cash cow.” It’s an even stranger world where not one, but two prominent media organizations choose to let those claims go unchallenged.

But that’s exactly what Poynter and Vanity Fair have done, publishing a James Warren column about Rebecca Carpenter’s Requiem for a Running Back film (ahead of a New York screening Wednesday night), and letting Carpenter make remarkable comments about ESPN’s reporting that suggest she isn’t too familiar with their concussion coverage.

The column ran initially at Poynter and then at Vanity Fair, and in the latter incarnation, it carries the astounding headline of “WHAT THE MEDIA IS AFRAID TO SAY ABOUT FOOTBALL” and the subhead of “And how the sports press has become complicit in Roger Goodell’s shame.” Those are strong claims, and if there was anything to back them up, they’d be interesting to explore.

But it turns out that “What the media is afraid to say about football” is just a bunch of musings from Carpenter on how ESPN isn’t doing investigative journalism on the NFL, something they absolutely are doing. Here’s the key part:

“The press, in many ways, has shaped the story of football since its inception as an Ivy League sport in the late 1800s,” says Carpenter, who’s had a long TV and film career. “Popular newspapers and magazines and football grew up together in the late 19th century, and the narrativization of football – with its dramatic story arcs and colorful cast of characters – made for dramatic and accessible journalism. There was great storytelling going on, and football was a fantastic vehicle for selling newspapers.”

“Fast forward to 2017, where ESPN is paying more than $7 billion to broadcast professional sports, and bringing in $6 billion (at one point revenues were as high as $10 billion). It’s hard to envision a media corporation that’s making billions off of a sport also doing investigative reporting that exposes the catastrophic dangers of their cash cow.”

“Absolutely,” she says. “We are all afraid of pissing off the league. I still am. Even writing this inspires fear. I’m just a girl trying to tell a story about my dad, and this mysterious disease that caused him to withdraw from life, as we knew it. I have heard that even at ESPN reporters have a hard time getting management to approve truly in-depth stories about CTE.”

“But I can tell you, from the dining room table stories I heard as a child, and the stories I heard that never made it into newspapers, the media does a very good job of containing negative stories about football. The explosion of grassroots social media has finally changed the death grip of major media institutions on this story, and stories like this.

Hmm. It’s a pity the “death grip of major media institutions” on this story prevented ESPN from “exposing the catastrophic dangers of their cash cow” with, say, an interview of Carpenter about this movie. Oh, wait; they did that last week on Outside The Lines!

Man, it’s just shocking that Carpenter didn’t go after ESPN while appearing on the channel, or in the associated longer podcast and discussion. Instead, she saved all that criticism up for Poynter. And her claims about ESPN are ludicrous to anyone who has ever read the many, many investigative concussion stories the Fainaru brothers have broken over the years, which have often pointed out major flaws in the NFL’s approach. (Such as this summer’s scoop on the NFL’s “concussion research” funding only approving one study, on racehorse jockeys.) And beyond that, there’s been a ton of other concussion coverage from ESPN, including a 2012 “Football at a Crossroads” series that ran across a ton of platforms, including SportsCenter, Outside The Lines, ESPN The Magazine and more.

Other ESPN reporters have written on concussion issues as well, and ESPN also regularly picks up and runs concussion reporting from the Associated Press and other news services on their website and discusses those stories on their many studio shows. Suggesting that ESPN is “afraid” to report on or discuss NFL concussions is insane, and it sure looks like Carpenter is trying to play up her film and present herself as the only one with the courage to talk about NFL concussions. But that is far, far from the case.

Of course, there have been occasions where ESPN’s concussion-related reporting decisions can be criticized, particularly with their decision to pull out of the documentary side of League of Denial (initially an ESPN-PBS coproduction). ESPN executives insisted that was about branding rather than NFL pressure, but that’s been viewed with skepticism elsewhere, and deservedly so. But former ESPN director of news Vince Doria did make one valid point in his defense of that move, telling Ed Sherman that ESPN probably delivered more concussion coverage than anyone else:

“If you looked slightly further, and look at what the on‑air product was and what we delivered and the volume of what we delivered, the platforms over which we delivered it and so forth, show me somebody else that comes anywhere near giving that kind of exposure to the concussion issue as it relates to the NFL. I don’t think there is anybody.”

And it’s also notable that while ESPN didn’t air League of Denial in its entirety and didn’t have ESPN branding on it, it still showed and discussed plenty of clips from the series, and it allowed the Fainaru brothers to participate in it. If Carpenter wants to go after ESPN over the League of Denial decision, that’s one thing, and it’s one that there’s a case for. But saying “It’s hard to envision a media corporation that’s making billions off of a sport also doing investigative reporting that exposes the catastrophic dangers of their cash cow” in general is ludicrous when you consider the vast amounts of investigative reporting ESPN has done on concussions. Or, you know, them giving you a platform to promote your concussion movie earlier in the week.

Saying that concussion stories have escaped the “death grip of major media institutions” thanks to “grassroots social media” is also insane, as most of the concussion stories have been broken by major media institutions, whether that’s Alan Schwarz’s detailed New York Times coverage (which Carpenter rightly praises elsewhere in this interview, but it happened at a major media institution long before social media existed), or  Jeanne Marie Laskas’s 2009 GQ piece “Game Brain” (which the 2015 film Concussion was based off of), or what the Fainaru brothers have done at ESPN, or what many others have done elsewhere. It’s not grassroots Twitter users reporting in-depth stories on the NFL and concussions; it’s major media outlets, including ESPN. So what is the media afraid to say about football, Vanity Fair? The things that they’re actually saying?

There’s always a place for informed criticism of ESPN’s business/on-air divide, and the League of Denial saga in particular was a terrible look for them on that front. If Carpenter wanted to discuss that in detail, great. But it’s rather ignorant to present that as the rule in their concussion coverage, especially if you’re not going to even mention it specifically. That’s a bad look from Carpenter, and one that raises some skepticism about her own film. It’s billed as a documentary that covers the NFL and concussions as they relate to her father (former NFL RB Lew Carpenter), and one that “tells the specific and horrific story of football and brain trauma, places that medical story into the context of the rise of the NFL as a voracious commercial enterprise, and illuminates — both with unforgettable stories of not just brain-damaged men but their families — the lasting collateral victims of this collision sport.” But if she thinks that ESPN hasn’t been doing investigative concussion reporting, that raises some big questions about her own coverage of the topic.

And maybe even the bigger questions here are for Poynter and Vanity Fair. Of course there’s incentive for Carpenter to promote her film, and there’s nothing wrong with those outlets running an interview with her. But just presenting her claims of ESPN ignoring concussions unchallenged is a remarkable move, especially for anyone who’s spent any time following the NFL’s concussion crisis or the sports media world in general. Carpenter’s comment of “It’s hard to envision a media corporation that’s making billions off of a sport also doing investigative reporting that exposes the catastrophic dangers of their cash cow” in particular seems ludicrous to run, given that ESPN is doing exactly that. But you wouldn’t know it if you just read these pieces in Poynter or Vanity Fair.