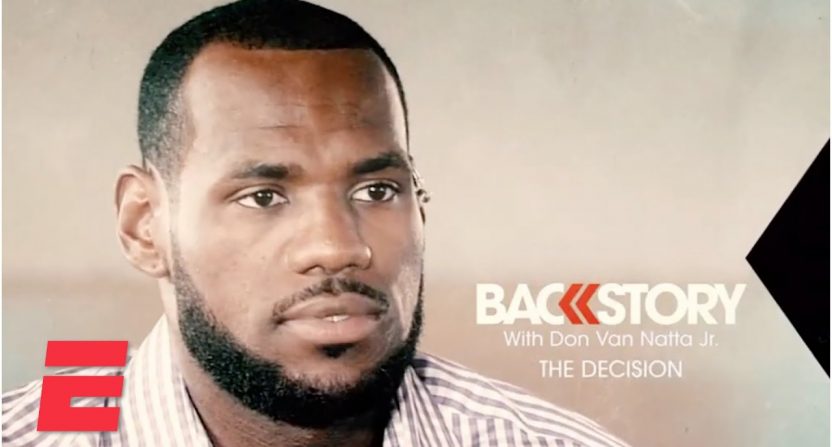 “This ‘Decision’ was ill-conceived, barely produced, and poorly executed.”

Has any television program received more withering criticism from the commissioner of a major professional sport than David Stern’s rebuke of ESPN’s The Decision?

The 2010 TV special featuring LeBron James announcing which NBA team he would sign with as a free agent was a huge “get” for the network. Yet neither ESPN nor James came out of the moment looking good. The entire circumstance continues to be the subject of ridicule and derision nearly 10 years later.

But that much time provides plenty of opportunity for hindsight, which fuels the latest episode of Don Van Natta Jr.’s Backstory docuseries. Backstory: The Decision will premiere on ESPN Sunday night at 9 p.m. ET.

Our next BACKSTORY episode is on @KingJames and “The Decision.” The true origin story. Player empowerment. Star athletes becoming storytellers.

The one-hour documentary looks at The Decision as both a media creation (and event) and a seminal moment for professional athletes, particularly for basketball players but especially for Black athletes. The repercussions of the event continue to resonate almost a decade later, changing the sports media landscape and how athletes are perceived by both the press and fans.

Van Natta looks back at the circumstances that led to the TV special, interviewing many of the key figures who were involved in putting the show together behind the scenes, including then-ESPN president John Skipper and Vince Doria, who was the network’s vice president and director of news.

Giving an hour of prime-time programming to James created a significant conflict with the news division. On one side, ESPN reporters attempted to find out where James would sign. On the other, the network didn’t want that information to get out in order to create maximum interest and ratings in the show. (Also causing friction was James’s team wanting Jim Gray to conduct the interview. Gray didn’t work for ESPN.)

For sports media diehards, the conversations and archival footage might feel like a time capsule of sports media in 2010 with Buzz Bissinger (who wrote two books about James) and Chris Broussard (then one of ESPN’s NBA insiders) among those interviewed. Clips from Erik Kuselias’s ESPN Radio show are also included among the reactions to James’ free agency choice.

Viewers might also be surprised to learn who initially came up with the idea for LeBron James announcing his decision on a TV special. Who first pitched the concept to ESPN executives is one of the more curious revelations in the documentary. The project was eventually shepherded by James’s representation and a top Hollywood agent. Skipper fought to have the show on ESPN, rather than ABC, and James’s team wanted to make sure Boys and Girls Club received the benefits from sponsors.

Yet the documentary is far more compelling when Van Natta’s reporting (and interviews with personalities like Michael Wilbon and Bomani Jones) widens its scope from the media machinations behind the TV show to look at the wider ripple effects James’s decision had in sports.

Former ESPN executive Keith Clinkscales, who worked with James’s team on producing the special, has arguably the most astute take on the entire event. Yes, maybe LeBron James took a heel turn and became a villain in announcing he would sign with the Miami Heat, especially in how he chose to do so. But as Clinkscales points out, what was more troubling to people at the time was a Black athlete taking the power and controlling how his story would be told.

That, more than the shoddy production of the TV program or the perceived arrogance of James saying he was “taking my talents to South Beach,” is the legacy of The Decision. LeBron showed athletes that they don’t need the media to play middleman when it comes to sharing news or making announcements. They can do it themselves, whether by going to media outlets directly or using platforms like The Players’ Tribune, Uninterrupted, Twitter, Facebook, and Instagram to broadcast their message.

Van Natta’s reporting suffers from not talking to arguably the most important figures in this story. Though he tried to interview LeBron James and anyone in his inner circle, such as Maverick Carter, Rich Paul, and Leon Rose. Jim Gray also opted not to speak with Van Natta. Those insights are missing, but that doesn’t stop Van Natta from filling in the narrative blanks.

Backstory: The Decision also has to overcome restrictions created by the COVID-19 pandemic. Van Natta had to conduct most of his interviews remotely over online video conferencing, and having to quarantine in the midst of producing this program was an obstacle. The documentary begins with explaining that situation, which makes for sort of an awkward introduction.

[Editor’s note: The advance screener provided for this review was still undergoing final edits, so the final program may look different and not include that footage.]

Overall, however, this episode of Backstory provides an intriguing look back at an event that turned out to be far more influential than was likely realized at the time. And though this happened 10 years ago, all of the circumstances feel surprisingly current because of the effect The Decision had on sports and media. That alone makes it worth watching.