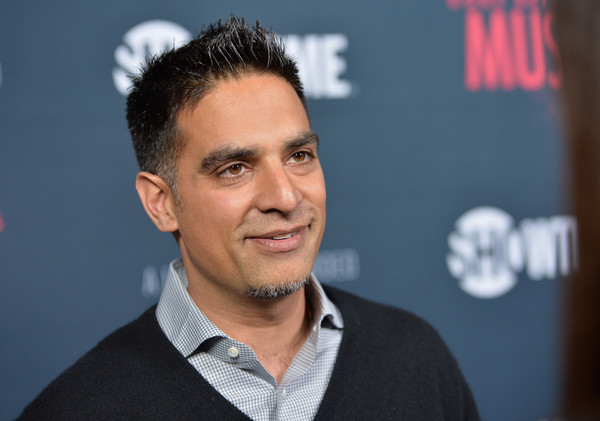 Filmmaker Gotham Chopra has quite the background in both sports and religion. As the son of famed author and speaker Deepak Chopra, he grew up with a lot of discussion around religion and spirituality, but he also grew up as a diehard Boston sports fan, and many of his projects have involved sports, including a 30 for 30 on Indian cricket star Sachin Tendulkar, a Showtime documentary on Kobe Bryant, projects on David Ortiz and Victor Cruz and more. The crossovers and similarities between sports and religion have been a lifelong interest for Chopra, and they’ve led to his new show, Religion of Sports.

‘The show, co-created with Michael Strahan and Tom Brady, will premiere on AT&T’s Audience Network Tuesday night at 8 p.m., and the first season will include six hour-long episodes. Tuesday’s premiere, “God In The Machine,” focuses on NASCAR and the world of racing, while subsequent episodes will look at everything from Rangers-Celtic to the Calgary Stampede to minor league baseball. Chopra recently spoke to Awful Announcing about how this show came to be and what he’s trying to accomplish with it.

Awful Announcing: How did Religion of Sports get its start?

Gotham Chopra: This goes back many, many years. I feel like I’ve been working on this almost my whole life. I grew up, obviously, in a family where spirituality was a ubiquitous part of my life with all the stuff my father has done. So really, going back into my teenage years when my father had his own personal transformation, that’s when I started to get exposed to religious traditions, spiritual traditions, wisdom teachers, all that sort of stuff. Meanwhile, I grew up in Boston, I’ve been a devoted Patriots and Red Sox and Celtics and Bruins fan my whole life, so I started to discover that everything that’s talked about in these spiritual traditions exists in sports. You go on pilgrimages, you come to these stadiums, which are like sacred sites for sports fans, you surrender yourself to something that you can’t control, you have faith. All of these things, they happen on a daily basis in sports. They don’t require dogma, they don’t require some sort of belief, they just require attendance. So that was the foundation for this idea, and it goes back a long time.

Probably in the last five or six years, I started working more in sports. I did a 30 for 30 for ESPN, I worked closely with Kobe Bryant on a Showtime project a couple of years ago, and I got to sort of live in that world and sort of see it from the perspective of the athletes themselves, especially Kobe, being an institution in Los Angeles. That’s when the television part started to take more shape.

AA: I see that Tom Brady and Michael Strahan are also credited as co-creators on Religion of Sports. What’s their involvement with this, and how did you get connected with them?

GC: Over the years, both have become friends. I’ve been working in sports for a long time now. Michael, obviously now a retired athlete, is someone who’s been pretty prolific with the media industry in particular, so I met him more of that formal way, crossing paths and having the same representation and agents and stuff like that. When I shared this idea, he just really resonated with it, I think both as an athlete, someone who’s experienced it from that perspective, but also somebody who understands this is a robust industry and when you have a unique point of view on it, there’s an opportunity to really find partners. He became a producing partner that way, and Michael’s surrounded by amazing people, including his manager, Constance Schwartz-Morini (an executive producer on the show), and they were just really helpful for me to really give this some shape and get it out into the marketplace.

Tom’s a little different, because I’ve been a fan of the Patriots my whole life and he’s become an institution for the Patriots. Tom used to spend his offseasons in part in Los Angeles, and we had mutual friends, so I met him. Like I said, I’ve been talking about this forever, this is my point of view on sports. So then I shared it with him and Tom’s like “Yep, I get it, I know what it’s like, every Sunday for me is a spiritual experience. I know what it’s like to try and perform at the highest level in front of 65,000 screaming fans. There’s a certain discipline that kind of goes into that, and for me it’s very spiritual.” So we started talking more and more, and Tom said “I’d love to be a part of this; tell me how.” Tom doesn’t come from a producing background, but I thought it would be cool to involve him and figure out the details later.

Over time, what’s happened is he’s actually become quite involved on a creative level. I show him stuff, I talk to him, even just at the very beginning about the sports we were thinking about exploring. And he’s responded to that. Because all of us…when you look at the first season, some of the sports are rodeo, and (MMA) fighting, and NASCAR, they’re slightly off-the-radar sports, at least for the mainstream fan, and Tom also was curious about that. So he’d say “If you’re going to talk to Dale Earnhardt Jr., here are some of the questions I’d be curious about. Somebody who’s at the top of their field, I want to know what it’s like for someone like that, if they experience the same things.” So he’s been pretty engaged in that way.

AA: You mentioned that this has been an idea you’ve had for so long. How has it changed over time?

GC: As a fan, you’re drawn first to the sports that you’re familiar with, so for me, that would be basketball, and baseball, and soccer maybe, and football, but the more I sort of waded into this, the more I was drawn to sports I didn’t know much about. I’d never been to a NASCAR race before the Coca-Cola 600 (featured in the first episode), before I started working on this project. I’d never been to a UFC fight before I started working on that episode. I’d certainly never been to a rodeo or an e-sports battle. So it changed from that perspective; let’s look outside the box and find sports where there’s more terrain to cover. And that’s sort of the natural curiosity, I think. And in the very beginning, we were thinking “Let’s always find an athlete, let’s always find a fan, let’s always find specific types of characters.” What always happens when you talk to people and get to know people, whether it’s a fan or an athlete, you start to resonate with their story and you just want more and more and more. So we gave ourselves license not to be so rigid with the structure of this thing and to really go where the story took us, where the character took us.

AA: Speaking of structure, I’ve watched the first episode, and I found it really interesting that you had a lot of focus not just on NASCAR, but on the dirt-track racing, the lower levels of racing. What led to that decision?

GC: You’re touching on one of my favorite parts of the show. The NASCAR, the big spectacle of sports is fun, and it’s incredible and spectacular to attend those things. It’s fun to film. But where the faith is really practiced, not unlike in religion, is at the community level. It’s one thing to go to the Vatican and get 20 minutes to walk behind the velvet rope and look at the ceiling Michelangelo painted and all that. It’s another thing to go to the community church, where you can get up on the altar, you can kneel in the pew, you can touch and feel what it really is like to be a believer. And the dirt track is that. You can go touch those cars, you can walk on the track, you can meet the people. And it’s a $2 entrance fee, and people bring their families, and they stay there all day. It was pretty cool; I’d never seen anything like that, and I had a lot of fun just hanging out. For a filmmaker, it’s cinematic gold to be there. So we really enjoyed that. Same thing with Minor League Baseball and some of these other sports, it was just fun to really get in there and not have to worry about big license fees and rules.

AA: How have the other sports projects you’ve worked on influenced this?

GC: Everything’s always an evolution. The Kobe project, frankly, there’s no bigger athlete in the world in some ways, or a more iconic athlete. Working with him gave me a unique perspective of what it’s like to see that world. When I did the ESPN thing, that was on cricket in India. We have a belief in this country, I grew up a Red Sox fan, so Red Sox-Yankees, we would say that’s a rivalry, but no. India-Pakistan, that’s a rivalry! The stakes are so big, the mythology behind it is so big. So working on that gave me a perspective of understanding the larger context of sports. I’ve started working with LeBron James on some of the stuff he’s been doing; it’s such a unique time where athletes are being asked to be politically active, to have an opinion on what’s going on in the world, and in LeBron’s case, he understands the responsibility. You can’t just say something and then not back it up. So I think all of these experiences have contributed to the way I see sports and how we interact with them.

GC: None of this happens on its own. I have an incredible creative team around me that’s fearless with these things. One of the things I’m excited about is that I feel like we’re building a franchise. ESPN has 30 for 30, which I think most sports fans and even non-sports fans know are familiar with. What I’ve even been able to do in this first season is create a playground for other filmmakers to come in. I directed three of the episodes, but had three other filmmakers come in and be able to tell amazing stories against the backdrop of sports, which is something that’s really exciting to me.