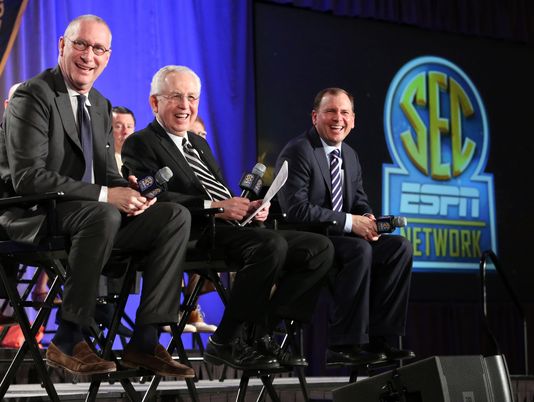 Chris Fowler taking a minute out of College GameDay on Saturday to speak on the allegations of ESPN’s SEC bias was an extraordinary broadcast moment.  Although that minute of airtime might not amount to very much in the grand scheme of things, it was a rare example of a top broadcaster breaking the fourth wall.  Fowler went off the script to defend his employer against growing claims that the network gives favorable coverage to the SEC to advance their own business interests.

But while his cohorts on set and surely those working in the control room and Bristol boardrooms cheered Fowler manning the front lines in defending ESPN, there are other consequences.  By acknowledging this line of thought, he legitimized it.

By giving claims of ESPN’s SEC bias time on College GameDay, the network’s flagship college football show, Fowler gave credence to the skepticism of ESPN’s SEC interests as something worth responding to.  He took the ESPN/SEC narrative from mere message board chatter, fodder for blog posts, and disenchanted feelings from other parts of the country and gave them a national platform.  Now, after Fowler’s comments, ESPN’s relationship with the SEC is going to be more scrutinized than ever before.

While Fowler’s comments were very logical and made a decent argument (ESPN has contracts with all the other conferences and the playoff would be better off with regional diversity), there was one part of his editorial that was bothersome – calling claims of ESPN’s SEC bias “stupid” and “uninformed.”

In fact, I’d argue that those questions of ESPN’s business relationship with the SEC are the polar opposite.

Questioning ESPN’s glowing coverage about the SEC is being informed.  It’s knowing that ESPN has a very close business relationship with the SEC and not trusting everything being said at face value.  It’s asking tough questions and trying to go beyond the prevailing narratives to find a deeper truth.

Come to think of it, that’s exactly what ESPN’s journalistic entities do every day.  If the reporters of Outside the Lines took everything at face value, and blindly trusted people in positions of authority, they would be of no use.  The NFL and its handling of this fall’s domestic violence crisis or their concussion crisis would go unchecked.  It didn’t because OTL and others in the media worked to hold the powerful accountable.

ESPN is the one that requires the watchdogs and the skepticism above anyone else.

So for Fowler and ESPN to say “just trust us, we’re not biased” when Bristol has so much invested in the SEC and SEC Network flies in the face of the best work ESPN itself does on a daily basis.

Just how much does ESPN have invested in the SEC?

– The ESPN-SEC contract that runs till 2034 isn’t just the longest sports rights deal, it’s the longest deal in all of television.

– ESPN worked directly with each individual school in the SEC to upgrade their broadcast facilities and capabilities for the SEC Network.

These factors go above and beyond any relationship that ESPN has with a league or conference, perhaps only outside the Longhorn Network and the University of Texas.  ESPN may have relationships with the other conferences in college football, but nowhere near to this extent where they own a network and promote Finebaum on the league website.

The wind always blows hardest at the top of the mountain.  If these skeptical questions of ESPN’s ability to balance journalism and business with the SEC are too cumbersome for them, then ESPN should be more than happy to trade places with Fox Sports.  Although many of these same questions can and should be asked of that network, Fox’s 51% ownership of the Big Ten Network doesn’t draw near the same attention as the SEC-ESPN relationship because Fox is largely an afterthought in college football.  If ESPN wants to cede their monopoly to get rid of these pesky allegations of bias, so be it.

It’s funny how ESPN only seems to admit to having a massive amount of money and power and influence when it’s convenient to boast about it.

Why is this a conversation special to college football and the ESPN/SEC relationship?  As we’ve stated numerous times before, FBS college football is unique in that it is the only sport whose champion is decided mostly off the field.  This year, it will be decided by a committee picking four teams who get to play in the playoff.  In other sports, every team gets an opportunity to compete for a title on the field.  Not so in big-time college football.  As you can see in this week’s polls, one-loss Arizona and one-loss Alabama are not created equal.  In any other sport, Arizona would have an opportunity to prove themselves and win a title on the field in a tournament or expanded playoff.  In college football, they have to depend on a group of people declaring their worthiness.

In that reality, perception and narrative have supreme importance.  This is where ESPN’s influence and coverage of the sport takes on extra meaning.  If ESPN trumpets the horn of the SEC West week after week and ignores the Pac 12 South, it has a real and tangible impact.  If ESPN over-covers the NFC East or AL East, it has no actual impact on outcomes in the sport.

To Fowler’s point, there is no universal proof of a wide-reaching SEC conspiracy at ESPN.  But there’s no denying given the facts above that what’s good for ESPN is good for the SEC and vice versa.  And as long as ESPN owns the SEC Network, and tries to cover college football while having close business relationships with its constituents, these questions of ESPN’s true intentions are going to exist.

As well they should.

There’s a difference in being skeptical towards the idea of ESPN’s alleged SEC bias and being cynical.  The cynic takes a look at Fowler’s commentary and ESPN’s creation of the SEC Network and assumes everyone employed by ESPN is in the tank for the league.  If that were the case, Danny Kanell would have been mysteriously taken off the air by now.  The skeptic takes a look at ESPN’s vested financial interest in the SEC and the attention the network gives the league and demands a closer inspection.  Kirk Herbstreit probably isn’t texting Condi Rice around the clock to make sure she has Auburn in her Top 4, but that doesn’t mean the ESPN-SEC relationship doesn’t bear close monitoring.

The separation of church and state at ESPN – their business interests and journalistic responsibility – is a tightrope that must be walked each and every day in Bristol.  When ESPN is unable to walk that tightrope, we end up with League of Denial debacles.  If ESPN wants to be the self-proclaimed worldwide leader in sports and make millions in profit while being the gold standard of sports journalism, they have to be willing to be held to account.  ESPN, now estimated at over $50 billion dollars, needs to have their integrity constantly put under the microscope just like any other powerful institution.

ESPN has a bigger impact on the sports world than you or I or anyone working in Bristol can truly understand.  As Jim Miller has famously wrote, ESPN is worth more than the NFL and worth more than the NBA, NHL, and MLB combined.  To let that kind of power and influence go unchecked, without tough questions being asked, would be a total failure on behalf of anyone not working for ESPN.

If this week’s discussion about the SEC-ESPN relationship causes Bristol to be more careful in balancing their business and journalistic responsibilities and keeping them safely separate, then it’s already done good work.  Good, necessary, informed work.