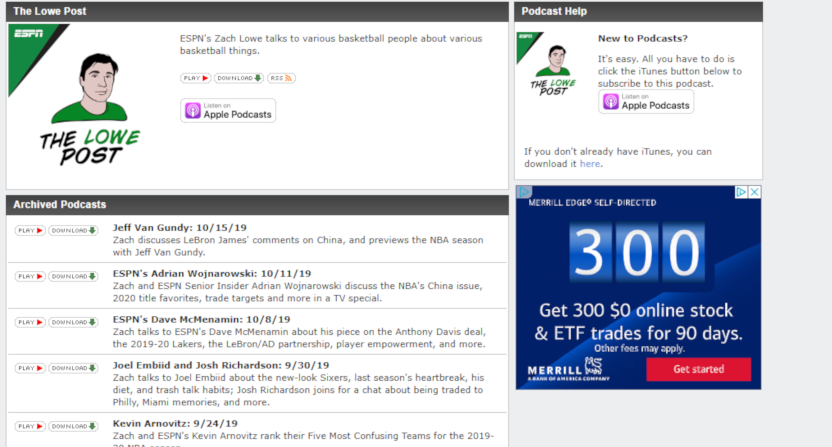 The ESPN coverage of the NBA-China saga has been interesting, with their shows largely living up to a memo to “avoid any political discussions about China and Hong Kong” (and the main political element they did show coming from SportsCenter displaying a map of Chinese territorial claims that’s only recognized by the Chinese government). And now, Ben Strauss of The Washington Post has reported on one specific way the network avoided “any political discussions”; banning NBA reporter Zach Lowe from having a particular guest on his podcast.

In at least one case, a reporter was explicitly told to stand down on covering the story the way he wanted. Prominent NBA reporter Zach Lowe attempted to host an expert from the Council on Foreign Relations on his podcast, only to be told he couldn’t.

There are questions about if trying to avoid those “political discussions” was the correct approach, as it led to a whole lot of non-discussion of what the protests were actually about, from extradition to mainland China to other democratic reforms. There are also questions on if ESPN actually avoided those discussions; they used politically-loaded terms like “anti-government protesters” in their news coverage, and various ESPN personalities did wind up addressing the political dimensions of the protests in various ways on studio shows. So “no pure politics” didn’t necessarily mean “no pure politics”; it meant that political dimensions still came up, just not always in the most thoughtful or planned way.

And a deep dive on what’s actually going on here on The Lowe Post with someone from the CFR probably would have stacked up favorably compared to some ESPN discussions of the NBA-China issues; it’s certainly better than showing that map, or than Stephen A. Smith bringing up Israel and Palestine for no reason whatsoever and causing the network to scurry to break. And it’s interesting that The Lowe Post still wound up covering the NBA-China saga, just with Lowe doing so in conversation with Adrian Wojnarowski and Jeff Van Gundy rather than with a foreign relations expert. There’s nothing wrong with the podcasts ESPN did put out here, but the proposed one with a CFR guest might have been more notable and more interesting, and it might have done a better job at covering the underlying issues here.

On the other hand, though, vetoing a particular podcast guest isn’t unprecedented for a news organization, or for ESPN. Having a particular guest on a particular news organization podcast carries implications for both the host and for the larger organization, and a guest’s comments can certainly carry blowback for their host. Consider some of the criticism Joe Rogan has taken for his guests, or some of the backlash towards Bill Simmons over things Malcolm Gladwell has said on Simmons’ podcast. Editorial oversight of podcast guests isn’t unique to ESPN, and it’s not new to ESPN. In particular, the network infamously blocked a Barack Obama appearance on Simmons’ podcast back in 2008 when Obama was a presidential candidate (before allowing a later one in 2012 when Obama was the U.S. president.)

And while the Council on Foreign Relations describes itself as an “independent, nonpartisan member organization, think tank, and publisher,” that doesn’t mean it is neutral or uncontroversial. As with any think tank, there are people who like the CFR’s stances and people who dislike them. The non-partisan status of the CFR also doesn’t mean that a guest from there wouldn’t create issues for ESPN; anyone at all commenting on a situation like the NBA-China one has the potential to make waves regardless of who they are, and a CFR guest probably would focus on the “political discussions” ESPN was trying so hard to avoid.

Still, going the extra mile here to veto this guest feels like a lot of effort for little reward (and/or little risk avoidance). And there is some inconsistency between the report of ESPN quashing Lowe’s planned guest and with the other ways the network handled this situation. As Strauss’ piece goes on to note, Jeremy Schaap tried to have various “China experts” on Outside The Lines with support from ESPN (even if those efforts were ultimately unsuccessful):

One place to address the larger issues of Hong Kong could have been on “Outside the Lines,” the network’s flagship news show. Jeremy Schaap, one of the show’s hosts, said in an interview that he attempted to have a China expert on the show last Tuesday. Schapp said he reached out to four people, including The New Yorker’s Evan Osnos, and that the efforts were supported by ESPN, though none of the guests were able to appear because of logistics.

So having a “China expert” on OTL would have been fine, but not on The Lowe Post? That’s an interesting line to draw (especially with them just giving Lowe a big extension), and one that doesn’t look great for the network. And that stacks up with some of the other criticisms of their China coverage; as Strauss notes, their news coverage of the situation was extremely limited compared both to other journalistic outlets and compared to how they usually push NBA stories forward. For their part, ESPN sent him the following statement:

“We are always engaged in constructive and healthy debate on the best way to serve our audience,” an ESPN spokesman wrote in a statement. “Ultimately, our decisions are driven by the approach we have been communicating publicly for the past 18 months — to ensure that we stay away from pure politics, since that is not why fans come to us. We covered the intersection of sports and politics very thoroughly throughout the week.”

Staying “away from pure politics”  may have some merit in theory, but it’s quite hard to execute in general, and that’s particularly true in a situation like the NBA-China issue. In this specific case, it’s extremely hard to draw a line on what is an “intersection of sports and politics” and what is “pure politics.” This is a sports dispute (especially over NBA broadcasts in China), but it’s also very much a political dispute about Hong Kong, about sports figures commenting on international politics, and about sports leagues (and esports entities)’ business ties to China. And it’s a situation that’s drawn attention from President Donald Trump to LeBron James to senators criticizing LeBron James.

Despite that statement, ESPN did not “stay away from pure politics” on the NBA-China front. There was plenty of political commentary on ESPN platforms throughout this, from the map (which the network still hasn’t issued a statement on) to “anti-government protesters” to some of the various descriptions of the protests Strauss details. And that’s what makes it particularly interesting that banning Lowe’s guest here was the line ESPN chose to draw; they were okay with, say, Kevin Blackistone talking about the political underpinnings of these protests on Around the Horn, and with Schaap reaching out to experts like Osnos, but not with Lowe putting out a podcast with a CFR guest? That’s curious indeed, and it shows some of the knots ESPN can tie themselves into when they try to “stay away from pure politics.”