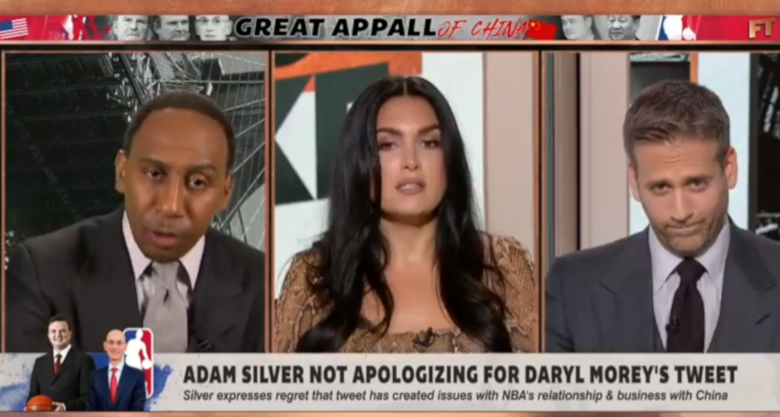 Remember all the times ESPN has proclaimed that they’re sticking to sports and avoiding politics,  apart from “we need to be covering those stories if there is a connection to sports“? (Which even then can be muted if those stories also involve connections to ESPN/Disney business interests?). Well, Stephen A. Smith sure displayed an interesting take on that on First Take Tuesday, opting to compare discussion of the NBA and China to the famed completely non-political issue of Israel and Palestine. Host Molly Qerim then quickly tried to rush to break, but Smith kept talking over her. Deadspin’s Billy Haisley has video of that; it’s not embeddable here, but here’s a transcription.

“Molly, before we close, I would remind you that, throughout this world, one of the things that exists is the Israeli-Palestinian conflict. I don’t see folks outside the Jewish community talking about that too often.” Qerim says “Okay, let’s do this, let’s come back to this,” and Smith presses on with talking over her, saying “Why? Because when you open your mouth, you have to be CAREFUL!” Qerim then says “Let’s take a commercial break. Sometimes, obviously, your moral compass trumps business interests, we saw it can cost you your job, look at Colin Kaepernick. Let’s get a commercial break in, we will get to Zion and maybe we’ll discuss this as well,” with Smith talking over her to say “Yeah, let’s come back, I’m not finished.” Qerim then continued to pump up their upcoming Zion Williamson discussion, saying “Zion burst on to the NBA scene last night…”

Shocking no one, ESPN did not come back to that. Which was probably a wise decision, as this may be the closest the famed @Hegelbon tweet has ever come to reality:

STEPHEN A: Skip I want to ADDRESS this issue.
[BAYLESS nods]
You KNOW I am sensitive to the Holocaust
BAYLESS: Absolutely
STEPHEN A: BUT!

And, amazingly, this led to people finding out that Smith sent a tweet not too far from that in 2010:

Let me nip this in the bud right now. Folks need to be very careful and not label ALL MUSLIMS in a negative way. Period. With that being

Here are the rest of the tweets Smith sent around then for some context. He was talking about, of all things, Bill O’Reilly going on The View and blaming Muslims for the Sept. 11 attacks, and then NPR choosing not to renew Juan Williams’ contract after he appeared on O’Reilly’s Fox News show and said “When I get on the plane, I got to tell you, if I see people who are in Muslim garb and I think, you know, they are identifying themselves first and foremost as Muslims, I get worried. I get nervous.”

Here are Smith’s tweets on that:

Said, there's nothing wrong with folks saying EXTREMISTS were responsible for 911 and that you're fearful and cautious because of it. I did

See Bill O'Reilly's comments on THE VIEW and he was wrong INITIALLY, which Barbara Walters did a great job of pointing out. He corrected

Himself by saying EXTREMISTS. But although I did NOT see Juan Williams' comments on his show, I've known Juan's work long enough to no that

Whatever he was agreeing with Bill O'Reilly about had to be pertaining to EXTREMISTS. Juan Williams has had an impeccable reputation for

Years. He's represented NPR well for a long time. Maybe there's more to learn on this matter but this much needs to be said: Juan Williams'

Body of Work deserves a helluva lot more than to be left out to hang and dry like this.

The 2010 comments from Smith are a heck of a reading of Williams’ comments (Williams did say in that interview that all Muslims shouldn’t be blamed for extremists’ actions, but him publicly saying he was scared to fly with Muslims sure wasn’t great, and it wasn’t referencing only extremists). But what’s really notable are the comments Smith made this week, and his decision to bring up Israel-Palestine, maybe one of the most inflammatory political topics out there, on “no-politics” ESPN, and to imply that only “the Jewish community” should talk about that (which is a hell of a comment on a lot of levels).

It’s also fascinating to see how quickly Qerim tried to get to commercial here, even with a throwaway “Let’s come back to this” (spoiler alert: they did not). And to see Kellerman’s face when Smith says this:

"Alright that'll do it for today unless anyone has any questions"
*guy to your right raises his hand* pic.twitter.com/UIF8Y58QRB

While Smith may want to dive into the Israel-Palestine conflict, it appears the rest of First Take was eager to move on to Zion Williamson, and that’s probably for the best. Perhaps Smith should stick to talking about “NFL quarterback Luke Voit” instead of ongoing hot-button geopolitical situations.