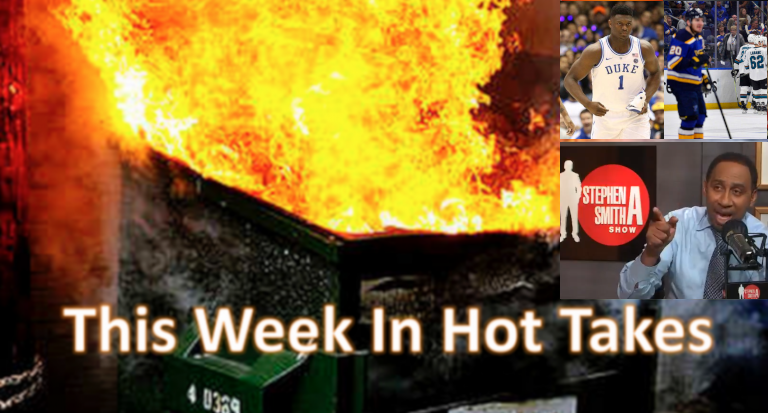 Welcome to another edition of This Week In Hot Takes. This time around, we’re looking at the hottest sports takes from May 10-16.

That the NHL cannot review a game-deciding mistake by referees but can debate a quarter inch worth of offsides is the shame of the NHL.

For the second time, the referees have given San Jose a victory. It’s indefensible.

This overtime must be replayed or no 2019 Cup awarded. https://t.co/qPSff35EaV

Olbermann’s wider critiques of the NHL’s officiating this postseason and of its review procedures aren’t without basis, but the league’s not going to replay that game, and the Stanley Cup really isn’t going to remain unawarded over a missed call in a third-round game.

4. Shannon Sharpe claims Zion Williamson should have wound up in L.A. or New York so stars can watch him courtside: There were a whole lot of fiery takes around the NBA draft lottery this week, which would up with the New Orleans Pelicans getting the top pick (and thus, presumably, Zion Williamson). One came from Fox’s Shannon Sharpe, who claimed this week the NBA should overrule its own draft (without specifying how they could do that) to force Williamson into a big market…so stars can be seen watching his games courtside?

"You want Zion in a big market. I'm sorry. … Jay-Z is not going to New Orleans to sit courtside to watch Zion — Kevin Hart, Denzel. But let him be in LA, let him be in New York." — @ShannonSharpe pic.twitter.com/44EnrAF4xf

“A guy like that, you want him in a big market, I’m sorry. That’s not to try and disparage these small-market teams, I understand that you want to have superstars to stay viable, but Zion in New York? Zion in LA? That’s box office. …It would have been better. The league is more interesting when you have the big, big guys in big, big markets. Jay-Z is not going to New Orleans to sit courtside to watch Zion.” Skip Bayless points out that stars went to Durham, NC to watch Zion play for Duke, and Sharpe responds with some more shots at the Pelicans: “The Pelicans, sell that. Oh, the Pelicans playing on a Tuesday night, woo-ee! Let’s load up the family and go.”

It seems highly unlikely that “stars sitting courtside” is actually a motivating factor for the NBA to do anything, especially as plenty of those stars in New York and Los Angeles have gone to games even when those teams are bad. And plenty of people will be watching the Pelicans this year if they have Williamson.

3. Adam Schein blames James Dolan and “bad sports karma” for the Knicks not getting the top pick: Speaking of that draft lottery, let’s talk about how the Knicks only had a 14 percent chance to win it (along with the Phoenix Suns and Cleveland Cavaliers). But for CBS Sports’ Adam Schein, the non-Zion to the Knicks’ outcome wasn’t a mathematically-predictable outcome, but rather “all bad sports karma created by Knicks’ owner James Dolan”:

"This is all bad sports karma created by Knicks owner James Dolan, who remains undefeated in being the worst.

In Zion’s heart of hearts, he would love to go back and play for Duke. More @Undisputed now on FS1 https://t.co/Y5RIspvATV

Yes, Williamson could theoretically decide by the NCAA’s deadline of May 29 to withdraw from the draft and head back to Duke, but it seems incredibly unlikely that he would pass up being the top pick and getting paid for his efforts to play another season of college basketball with just a scholarship as compensation. But Bayless says “I do see it as a viable credible threat” and adds “You don’t have to go to China or Europe, you can go back to where you really loved it” and Shannon Sharpe responds with an astounded “To play for free?” Bayless says “You say for free, but you don’t think there are deals being made everywhere?”

Uh huh. Yeah, Williamson will totally get paid as much as he would in the NBA in college, in a way that doesn’t attract any NCAA problems. Right. And basing this on Williamson just saying he loved playing at Duke is a heck of a stretch.

1. Stephen A. Smith melts down over the Knicks not getting the #1 pick, including with “IF YOU ARE A KNICK FAN, THIS IS THE EQUIVALENT OF BEING KIDNAPPED, STORED IN A BASEMENT, BEING TORTURED AND THEY LET YOU OUT WHEN YOU ARE NO USE TO ANYBODY!”: The most remarkable thing from this whole lottery may be how completely ESPN’s Stephen A. Smith lost his mind about it. Let’s look at some examples:

Working in a cubicle near Stephen A. Smith is approximately 500x better than I thought it would be. pic.twitter.com/9oqwwGdUWU

That first Smith clip in particular prompted an amusing reaction from Will Leitch at New York magazine:

It’s a video with everything, beginning with Smith simply screaming, “DAMMIT!!!! DAMMIT!!!” into his phone, seemingly from a moving vehicle, before putting his head in his hands and mournfully shaking it as if he’d just witnessed a cute animal being run over by a train. For reasons unbeknownst to any sentient person, this television professional, one of the highest-paid media personalities on the planet, has not provided any light for his close-up, giving the video a confusing Blair Witch feel.

I might love the way he closes the video the most, wailing in his best Leave Britney Alone voice before nearly breaking down and moaning, in a startling Stephen A. admission, “I don’t even know what else to say.” He ultimately sticks the landing: “Hopefully I’ll calm down before First Take tomorrow,” bringing the whole thing home to nail the promo this was all about in the first place. Friends: Two million people have watched this video. I give up. Stephen A. wins. I accept it. In a sports-media world of disingenuous hucksters, blatant liars, and Barstool, this sort of lunatic performance art has a certain dignity to it. Good for you, Stephen A. If someone has to reign, it might as well be you.

Also, that second Smith clip (via Pablo Torre) in particular is hilarious enough to deserve a transcription:

“AND SEAN FARNHAM ON GET UP THIS MORNING WITH MIKE GREENBERG, HIM AND HIS BENEDICT ARNOLD SELF, WALKING AROUND HAVING SHOWS ON TELEVISION IN THE MORNING, ACTING LIKE THIS IS A GOOD DAY TO JUST LAUGH. IT’S ALWAYS A LAUGH WITH THE NEW YORK KNICKS FOR NON-NEW YORK KNICKS FANS! I THOUGHT MIKE GREENBERG WAS A GOOD MAN! I THOUGHT HE WAS A PERSON THAT DIDN’T LIKE TO WATCH PEOPLE SUFFER! AND THEN THAT DAMN PABLO OUT THERE WITH BOMANI, HE’S STANDING IN THE HALLWAY LAUGHING AT ME TOO! THIS IS NOT FUNNY! IT’S NOT FUNNY! THIS IS A TERRIBLE, TERRIBLE DAY! I DON’T KNOW ABOUT THE REST OF YOUS, I DON’T KNOW ABOUT THE REST OF YOUS, BUT IF YOU ARE A KNICK FAN, THIS IS THE EQUIVALENT OF BEING KIDNAPPED, STORED IN A BASEMENT, BEING TORTURED AND THEY LET YOU OUT WHEN YOU ARE NO USE TO ANYBODY! IF YOU ARE NOT A KNICKS FAN, YOU MAKE ME SICK! I DON’T LIKE ANY OF YOUS, ANY OF YOUS!”

That one’s particularly crazy, and Smith should know that sports references to kidnapping and basements often end poorly. But the sum total of the histrionics from Smith here gives him our hottest take this week. What’s really impressive is that he still has a voice after all this.

Honorable mention: It’s not actually a hot take, but Max Kellerman cutting a Scott Steiner math promo (except with math where the numbers actually add up) and Smith still finding ways to argue about it deserves more attention: