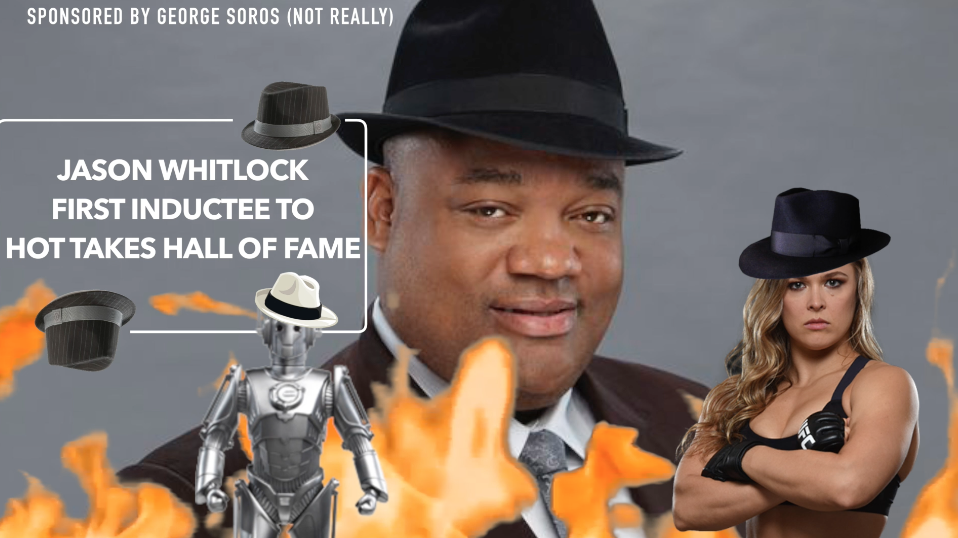 TLDR- Whitlock’s hot takes are too terrible for us to write about anymore.

We threw out this idea on Twitter last week and there was a lot of positive feedback. If you’re not familiar with This Week In Hot Takes, it’s a weekly column Andrew does that shines a light on some of the more ridiculous “takes” that are put forth by those in sports media. If you’re thinking, “Why would you guys pay attention/give attention to that stuff?”, that’s a very fair question.

What we found is that as more networks, at both the national and regional level, began to invest less in storytelling, news, and substantive analysis and more into what is known as “Embrace Debate” style programming and discourse, the more we found ourselves debating what warranted coverage as often these “takes” would draw attention on social media and other outlets. Sometimes we’d choose to ignore a blatantly ignorant and dumb take only to see it become a trending topic on Facebook or Twitter. Other times we’d sink our teeth into something that nobody really paid attention to in the first place.

While we do still cover some of the more noteworthy hot takes individually, This Week In Hot Takes was our solution to have basically a dumping ground for marginal stories we didn’t really want to crack our knuckles and write about. God bless Andrew for signing up to do this. We kid that we should make him sign a mental health waiver (his wife is a lawyer). 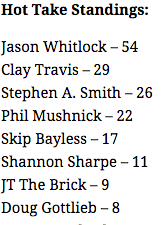 The column has caught on, but four months in, we’ve run into a bit of a problem. Here you’ll see the standings through a handful of months. For reference, each week we select 5 takes and assign them a 1-5 fire rating, with these being the cumulative standings for the year. As you’ll see, Whitlock has lapped the field, and he’s only picking up speed at this point.

On a weekly basis we’d spend time looking for hotter takes trying to spread the ball around a bit. But it was a futile effort as someone would drop in a message of Whitlock’s newest colorful insight and we’d all stare at it in Slack as if it was a three minute voicemail from your mom that you had anxiety about before deciding to play.

They were painful to watch, listen to, and read (moreso than the others). They also began to move away from questionable proclamations about sports and towards more incoherent commentaries on politics, social media, and society. They got lazier, crazier, and, frankly, incoherent and more conspiracy-centric.

He blames the criticism on a culture war, and when that didn’t seem to resonate, it was later “native advertising,” a term he doesn’t understand whatsoever. He’s essentially saying people are paid to write negatively about him and other topics (not native advertising, that’s more like unlabeled sponsored content). Who did he think was hypothetically paying for this bad coverage of him and like minded hot takers? We always wondered this and when we got our answer of George Soros, it was a mind-blowing mix of disbelief and giddiness.

We suspected FS1 was loving this attention and moreso, was enabling this downward spiral of drivel. Below, a portion of an email we received from someone at FS1 not authorized to talk on the matter.

You’re not crazy for thinking the higher-ups love the attention regardless if it’s almost all negative. It’s their social media strategy more or less. Many of us (non decision makers) question if this is good for our brand but there isn’t much we can do about it. It is what it is.

The dramatic way he left ESPN and Deadspin’s role in that has left him jilted towards a lot of different things. That, plus this past election cycle, and our anything goes content strategy we’re pursuing has all led him down this path. It’s tough to be around at times.

With all that in mind, now that he’s crossed 50 points, we’re going to just elect Whitlock into the Hot Takes Hall of Fame and shine a light on more focused and sports-centric hot takes. We’ll still cover him should his role change or if there are any other news developments regarding him and his career, but the individual hot takes? Not so much.

Before moving on, a look back at an impressive resume of work. Here are five of Jason Whitlock’s hottest takes compiled by Andrew over the past few months.

5. Whitlock blamed “Marxists movement,” “communist money,” and “liberal advertisers” for criticism of him. This came over the summer before we launched This Week In Hot Takes, but these tweets are amazing:

@Musakewl you heard of the Chinese Communist Party? try Google.

@first_edward there is no conspiracy. there's always been a Marxists movement in America and abroad.

After Deadspin criticized him for this, Whitlock then went on to blame their coverage on a Russian minority investor in Gawker Media:

Blog financed by Putin-made billionaire (Viktor Vekselberg) is the expert on this topic. Don't need me. https://t.co/BgsFL4tvJV

All the conspiracy theories!

4. Whitlock said Trump critics like Gregg Popovich should blast “clueless progressives,” not Trump: This clip is amazing on so many levels, including the usage of the phrase “twoke social justice warrior”:

It also seems to completely misunderstand or misrepresent the criticisms those figures have offered. Quite the take.

"We're crippling black kids with over sensitivity rather than preparing them for the real world." —@WhitlockJason on Nigel Hayes & Wisconsin pic.twitter.com/yT3n1RubZK

Really, a player thoughtfully sharing his experiences with racism after an incident where fans showed up at a Wisconsin football game with an Obama mask and a noose is a result of being crippled with oversensitivity? Sure thing, Jason.

2. Whitlock on the “Cyber Humans vs Humans” culture war: This September take is still pinned to the top of Whitlock’s Twitter profile, and it’s one of the more absurd TV segments you’ll ever see:

I mean, what more can you even say about that?

This take (and the similar one from fellow Fox personality Clay Travis) were bad enough to make us write about them outside of This Week In Hot Takes.  It’s the perfect Whitlock take; it combines his ignorance about a sport with far-out political opinions thrown in for no apparent reason, blame of the media, and a conspiracy theory to tie it all together. Nice of him to go out on a high note.