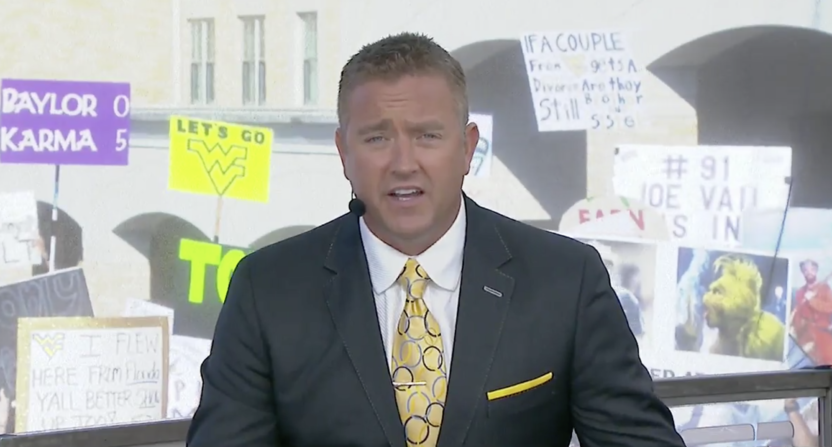 Some officials haven’t been too pleased by ESPN’s 12-year, $3 billion deal with the Pac-12. One notable detractor was University of Washington head coach Chris Petersen, who lamented having to play night games every week to cater to the primetime preferences of ESPN in broadcasting games. Petersen claimed that constantly having late games hurts their national exposure.

One such person who took offense was Kirk Herbstreit. On College Gameday, Herbstreit took Petersen’s comments to task and said that people like him should be thanking ESPN for providing nationwide coverage for the Pac-12.

“The reality is, as an advocate on this show for the Pac-12 for the last 20 years, wanting to try to bring as much exposure to that conference as we can, you should be thanking ESPN for actually having a relationship thanks to Larry Scott with the Pac-12 because your games are seen. Before, there was a black hole when it came to the Pac-12 and now, you can actually tune into the Pac-12 and see them if you live in the ACC or the SEC or the Big Ten. So I understand [Petersen’s] point but be careful. Would you rather be on at 3:30 on the Pac-12 Network eastern when nobody’s watching?”

First off, let’s not act like ESPN is some sort of charity and is giving the Pac-12 an opportunity to make a name for itself. ESPN wouldn’t be in business with the Pac-12 if they didn’t think they could have a financially lucrative partnership with them. And that’s the same with the Pac-12 in partnering with ESPN. That’s what a business relationship is supposed to do, for both sides to benefit. And while Herbie probably shouldn’t have rubbed Petersen’s nose into it saying that he “should be thanking ESPN,” Herbstreit isn’t exactly wrong either.

Call what Herbstreit said as ESPN displaying “East Coast bias” in giving the Pac-12 too little credit or whatever, but the ratings that are coming in kind of strengthen Herbstreit’s argument. The Seattle Times reported that despite games starting after midnight in the East Coast, ratings are 12% higher than afternoon games. For games just on ESPN2, that figure is 72% higher for late night games compared to those in the afternoon. And when it comes to demographics based on time zones, 65% of viewers of late night Pac-12 games are from the Eastern and Central time zones compared to 60% from that same time zone for afternoon games.

Herbstreit raises a crucial point and he’s right. You could play at 3:30 on a Saturday afternoon on the Pac-12 Network, a network not everyone has (including DirecTV) and you are competing against dozens of other games featuring top teams being played at the same time. Yes, when playing a game that starts at midnight eastern, many people have gone to bed and may not be watching. But at the same time, you don’t have nearly as much competition for the eyeballs of college football fans. The entire Eastern half of the country is definitely not going to have games going on so that means less competition and a better chance at getting on a network like ESPN with wider distribution than other sports networks.

By that logic, maybe Petersen should get used to playing later than he’s used to, it seems to be working out for everyone so far.