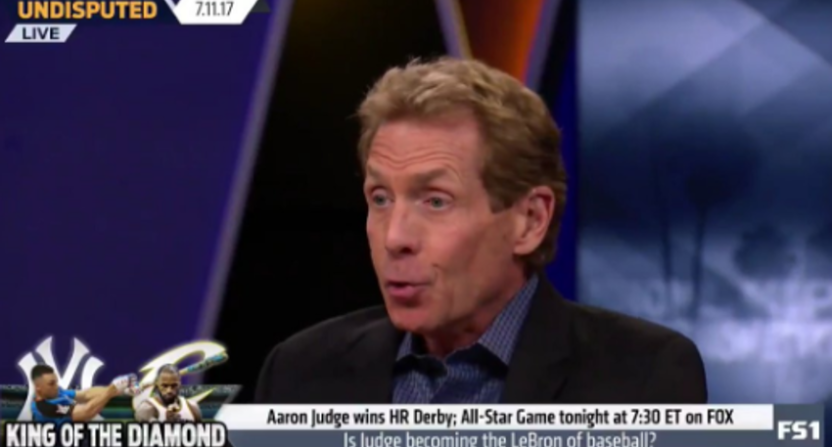 It sounds like there’s a growing push for synergy over at Fox Sports, one that might force debaters like Skip Bayless, Shannon Sharpe, Colin Cowherd and Jason Whitlock to focus more on sports Fox has the rights to. That feels like a highly questionable move, and one that may wind up damaging the debate shows’ ratings, but it’s apparently going on, and has been exacerbated by Jamie Horowitz’s firing. Michael McCarthy of The Sporting News reports that “the pressure is on FS1 studio talent to talk more about sports that actually air on their network,” citing several anonymous sources within Fox:

“There’s a disconnect. These debate shows are still going on and on about the NBA — which ended a month ago — and there’s not enough about MLB which is in the middle of a season,” one source told SN. “Jamie would protect those guys if they still wanted to talk NBA. But Jamie is gone.”

Another source was equally blunt: “Look, (FS1) airs MLB, UFC and soccer — and all these studio shows ever seem to talk about is the NFL and NBA. They have to reflect what’s actually on FS1 — and what drives ratings.”

Said a third source: “These debate shows don’t make sense given what’s actually on FS1. It’s like they’re switching viewers in and out.”

Word on the street is some rights holders have already beefed to Fox about their lack of visibility on FS1 studio shows. Look for this situation to change as the debate shows seek to align their topics more with what’s best for FS1, rather than the hobbyhorses that TV talent prefer to ride.

What these sources are missing is that the sports actually on FS1 don’t really make for good national debate, though, and perhaps especially not for Bayless and Sharpe’s brand of debate on Undisputed. They’re also overvaluing the potential upside of forced promotion of FS1 sports on the channel’s debate shows, and overlooking the many significant possible downsides. Those are worth exploring in some detail; let’s start with the hosts themselves.

In particular, Bayless and Sharpe generally focus on the NFL and the NBA, and that usually works for both them and their audience. Bayless has had plenty of NFL opinions over the course of his career, especially about the Cowboys, and can point to his time covering that team as supposed proof of his expertise. He’s also become known for his NBA takes, especially about LeBron James. Sharpe obviously has NFL knowledge from his own playing career, and has proven adept at debating Bayless on the NBA as well, especially when it comes to defending James and the Cavaliers. Their NFL and NBA discussions work, they feel authentic (or as authentic as anything on Undisputed gets, anyway), and they’re something their audience wants to watch.

When you go away from that, you run plenty of risks. See June’s attempt to reveal U.S. Open tee times on Undisputed, for example, or some of the other attempted golf coverage the show did. The tee times didn’t work either for Undisputed fans (who mostly don’t care about golf) or for golf fans (who were annoyed at having to watch a show they don’t like that mostly didn’t cover their sport in order to get the tidbits of tee times). And the golf hot takes Bayless and Sharpe came up with at points were even more ludicrous than their usual hot takes, and felt forced.

Those golf takes didn’t work for anyone. The regular Undisputed crowd isn’t tuning in for golf takes, and golf fans aren’t going to tune in to see what Bayless says instead of watching or reading the countless people more well-versed in their sport. It doesn’t seem likely that anyone watched the U.S. Open just because it was discussed on Undisputed, and if anything, some people may have turned off Undisputed when it went to golf.

Similarly, shoehorning sports that FS1 does air into comparisons with the sports Undisputed usually discusses doesn’t work either. Consider Tuesday’s hot take (which McCarthy cites as an example of this new focus) that brought up the New York Yankees’ Aaron Judge, but only in comparison to LeBron, and with the main point of comparison being their participation or lack thereof in all-star skills contests:

Here’s the video of that:

The way Sharpe just laughs at this is pretty solid, and maybe the most entertaining part of this clip. It’s such a forced comparison, and one that feels very awkward, especially when Bayless brings up the “clutch gene” (competing in a skills contest involves a “clutch gene” now?). And it’s hard to see this (or any of their other baseball debates, like Rob Parker describing Judge as “the face of MLB“) really catching on with the regular Undisputed audience.

That audience isn’t necessarily giant baseball fans, and it’s clear that Bayless and company are a little out of their depth talking about the sport. That would also be the case for golf, or NASCAR, or non-McGregor MMA, or soccer. (Actually, let’s make them do soccer; the sheer uninformed take fire there might be entertaining, at least.) Their takes on the NBA and NFL aren’t necessarily any more accurate, but there’s more conviction to them, and there’s more appeal for a national sports audience.

That’s another element these sources are missing. FS1’s debaters focus on the NFL and NBA (and occasionally college football, especially with Cowherd, but Bayless and Sharpe weigh in on it as well) not just because of their own preferences and backgrounds, but because those sports have giant national fanbases and drive the national conversation. MLB can do that at times as well, especially when the playoffs roll around, but FS1’s debate shows already cover it then. It’s much harder to have a midseason MLB debate on a national scale; it works for local radio because there’s one or two teams to cover, but there aren’t often big national storylines that appeal to a larger audience.

By contrast, during the NBA regular season or even the offseason, there are a ton of national talking points around teams like the Cavs and Warriors. Similarly, McCarthy later quotes a Sherdog article complaining that Bayless and Sharpe focus on things like the Conor McGregor – Floyd Mayweather fight rather than Kevin Lee-Michael Chiesa, but the McGregor-Mayweather fight is much more relevant to an audience beyond hardcore MMA fans. If you make Bayless and Sharpe talk about a Lee-Chiesa fight in depth, or about the Houston Astros or Milwaukee Brewers, you risk having some of their regular audience tune out. And you also risk compromising their supposed reputation for authentic, say-what-you-think debate; it’s not “tune in to hear what Skip Bayless thinks about what’s airing on FS1 tonight.”

The other question here is what the upside really is. Yes, if Bayless and Sharpe talk about something like the Lee-Chiesa fight, that might get a few more people to watch it, but for a lot of these other things, it’s not necessarily going to make a difference. If they’re talking Aaron Judge, it might get a few people to watch the next Yankees’ game on FS1, but will it really boost their MLB coverage overall? If they talk golf, will anyone else really tune in for the U.S. Open? All of that seems pretty unlikely, and it doesn’t account for FS1’s studio audience being rather different than their live sports audience. Most of the people who tune in for a sports event are going to do so regardless of it was previously debated. So there’s plenty of risk in trying to push these other sports, without necessarily a ton of upside.

McCarthy’s sources are also missing that the debate shows already talk about Fox and FS1 sports when they’re relevant to a national conversation. The NFL happens to be a Fox property, and Fox has more Cowboys games than anyone else, so it’s not like promoting them is hurting the channel. You can bet that Cowherd, Bayless and Sharpe will be talking Ohio State-Michigan in advance of that game, aired on Fox for the first time this fall, and that they’ll be discussing other big college football matchups as they happen. And there will be plenty of MLB talk around the playoffs and the World Series (also on Fox), because those events are relevant nationally.

So, it’s not like these shows are ignoring Fox’s events as it is, and perhaps a slight push to do a bit more of that might be okay. But a big push forcing them to cover the more niche events that happen to be aired on FS1 seems to be more trouble than it’s worth, and may create some blowback for the shows. We’ll see what happens here, but it’s certainly interesting that there’s this extra pressure to alter the debates going on. And it’s notable that it’s happening after the exit of Horowitz, who for all his faults, seems to know more about what makes for successful debate shows than these sources.

This isn’t necessarily “what’s best for FS1”: it’s what rightsholders and some Fox sources think is best. The debate show viewers may disagree, and that may lead to some ratings problems for those shows. That in turn may cause more issues for FS1 than it solves.