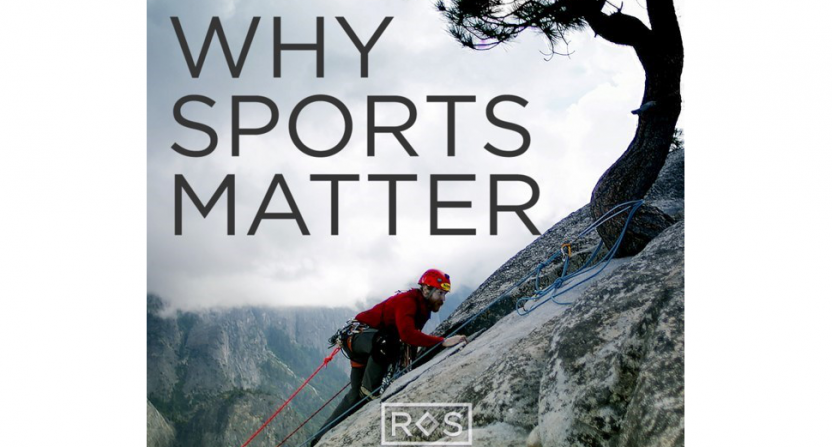 There are a whole lot of sports podcasts out there, as shown with our Should I Listen To This? series, but that isn’t stopping new players from entering the marketplace. One interesting new entry comes from the very-busy Gotham Chopra and his Religion of Sports company (co-founded with Michael Strahan and Tom Brady); Chopra currently has Season 3 of that documentary show airing in Audience (starting tonight at 8 ET/PT), he directed the recently-aired Showtime series Shut Up And Dribble (with LeBron James as an executive producer), and he’s the host for Religion of Sports’ new “Why Sports Matter” podcast  (in association with podcast network Cadence13).

There are several episodes of that podcast already available on iTunes, their website and more, and further episodes are coming each week, with the first season comprising eight total episodes. Episodes released so far cover mountain climbing and mortality, tribalism, sports and politics, and healing from the Humboldt bus crash. Chopra recently spoke to AA by e-mail and said he dove into podcasting because of his own love of the format.

“I’m a podcast addict. I love listening to them and over the last few years have wanted to do one myself – I just wanted to do something original. “Why sports matter” has always been the DNA of our company and at the heart of all the stories that we tell. So when we started to brainstorm about what our first podcast would really be, that same ethos was the starting point. In general, I think podcasting demands great storytelling. You can’t rely on cinematic images to deliver emotions for you – it’s all in the ability to communicate through words and sounds. So I think that pushes storytellers to be even more diligent in what they want to say and how they want to say it.”

He said the audio medium leads to very different approaches and choices than his TV work.

“It’s a different sort of storytelling. With filmmaking, you can rely a lot on the visual material you insert into the frame to help you communicate an emotion or evoke a mood. With podcasting, there’s no such luxury – it’s about the words and sounds coming from someone or something and that requires a degree of attention and story crafting that is very different.”

Chopra added he finds it important to consider the listener, and to avoid making podcasts overly scripted.

“I also think podcasting is quite liberating. There’s an intimacy between the host and the listener which I feel like really requires an honest and directness. So to me, podcasting feel very unscripted. There’s a an authenticity about it that I think makes the stories feel even more pure.”

There are a ton of potential sports stories out there to pick from, but Chopra said the key focus for “Why Sports Matter” is not the stories everyone else is talking about. Instead, he chooses stories with “heart,” and also stories they can explore in-depth with substantial access.

“Listeners find podcasts and they form a loyalty in a way that television series and films don’t. So we really look for characters and stories where we can really go deep. We don’t need to have the biggest names or splashiest topics – we need access and depth. We need subjects that are “willing to go there” and stories we know have real layers to them. For me, Religion of Sports has always been about understanding how sports provide meaning, purpose and significance in peoples’ lives whether they are athletes or fans. With podcasting, we’re always looking for those sorts of stories that can really resonate far and wide.”

Chopra said he hopes these podcasts will find an audience that enjoys them, and spread further that way.

“The most effective marketing or podcasting is word of mouth. People listening, liking and then sharing. So my only wish is for people to give it a listen, and if they like it, leave us a review and then share it with their friends and followers. I am biased, of course, and think we’ve stumbled upon something pretty cool. Now we just need people to listen and let us know if they agree!”

The Why Sports Matter podcasts can be found on iTunes or on the Religion of Sports website.