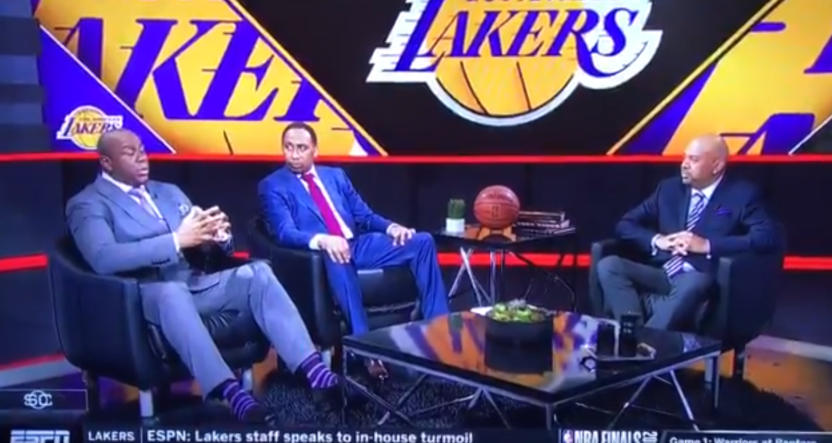 After a story criticizing what’s going on inside a particular organization, there’s often criticism of the first story from the people involved, and there’s sometimes criticism of the first story from other media outlets. It’s much more unusual to see the organization that published the story in the first place bending over backwards to try and discredit it, though, but that’s what happened on ESPN Tuesday, with Stephen A. Smith criticizing a story about the Lakers, Magic Johnson, and Rob Pelinka.

The story in question, from ESPN senior writer Baxter Holmes, is based on interviews with “nearly two dozen current and former team staffers, ranging from occupants of executive suites to office cubicles, in addition to league sources and others close to the team.” And it has plenty of comments critical of past and present Lakers’ management, including GM Pelinka apparently lying to the team about introducing Kobe Bryant to Heath Ledger months after Ledger’s death, Johnson and/or Pelinka berating employees (some who said they suffered anxiety attacks as a result) and cutting front-office staffers out of the draft process, the team giving extra access to Rich Paul (LeBron James’ agent) and more.

The story as a whole has a lot of interesting information, and some things that don’t look great for the Lakers’ organization (especially when it comes to their office environment). Of course, though, some of it can be disputed; it’s not necessarily surprising that staffers would want to throw out some anonymous shots at past (Johnson) and present (Pelinka) managers, and some of the criticisms (lower-level employees thinking the team would draft one player rather than the one the GM eventually chose) feel more like a “Why wasn’t I consulted?” complaint than an actual indictment of the team. However, overall, there’s still a lot here that doesn’t look great for the Lakers, and a lot of questions about the behavior of Johnson and Pelinka.

But you wouldn’t know that from ESPN’s TV coverage, much of which wound up being an extended defense of Johnson and an extended tear-down of their own reporting. Of course some discussion of the story is to be expected, and maybe even some disputing of particular elements there. But this went way beyond that, with Smith in particular just criticizing the existence of this story. And that got particularly rough when Johnson appeared on the network himself alongside Smith and Michael Wilbon, and where they both just let Johnson bash the story without actually providing evidence it was wrong.

Of course, it’s not really surprising to see Johnson playing defense on this one with a TV appearance. Appearing on TV and getting out your own side of the story in vague terms without actually disputing many specifics is par for the course at this point. However, it’s quite unusual for that appearance to come on ESPN, the same network that ran the story. And it came as part of a “NBA Finals Preview” featuring Johnson, which quickly turned into Johnson bashing ESPN.com’s story:

Magic Johnson addresses alleged abuse in the workplace, Rich Paul on the team plane, Pelinka, and other details from the article todayhttps://t.co/tf4E0yFl5t pic.twitter.com/buhEgxfXCR

The “letting the figure criticized by a report tell their side of the story without a lot of pushback or questions” move is from a playbook we’ve seen before from ESPN, especially where the initial story came from another outlet (see Zach Smith and Brett McMurphy’s story). However, this one is particularly notable considering that it was ESPN itself running the initial story; this isn’t an interrogation or a defense of their writer and their journalism, it’s Smith and Wilbon sitting nearby and giving Johnson a forum to express his grievances. And Smith in particular made it very clear how he feels about this in rants on First Take and then on his radio show earlier in the day, where he not only trashed ESPN.com but also made light of anxiety attacks in general:

Yes, @KobeBryant was LIVID his name was even mentioned amid all of this Lakers mess! pic.twitter.com/qpJI8BdR0Q

Ladies and gentlemen, The GOAT @stephenasmith went OFF today about Earvin Magic Johnson and the Lakers ? NEW HEAT ? pic.twitter.com/G4ZTdnIjQN

Pushback against certain details of a report is one thing, as is discussion of how significant the reported details actually are. And there’s room for reasonable and rational discussion of this story on its merits. But that’s not what Smith’s doing; he’s not applying his own reporting or even reporting-based thinking, he’s just stating his own opinions about what he thinks is accurate. And he’s also complaining just about the existence of this story, because it makes his planned soft-focus interview a little more challenging. As Sopan Deb of The New York Times noted about that radio show clip, Smith’s behavior here is highly, highly unusual for someone who theoretically is a journalist (at least, he claims to be one whenever it’s convenient for him), and for someone who works for the network in question that published the report:

This is Stephen A. openly doing PR on behalf of the Lakers, Kobe and Rich Paul, while at the same time undermining his own network's reporting. It's the strangest thing. Kobe says "Keep my name out of your mouth"? Why is Smith just…repeating that?https://t.co/GoIeIDUPn7

And those clips in particular really undermine Smith’s credibility as a figure “interviewing” Johnson (or really, mostly sitting there with Wilbon while Johnson spins his side of the story). It’s clear where Smith stands here, and it’s not with reporters or with his news organization. But it’s also clear that his behavior is valued by ESPN; in fact, Michael McCarthy of Front Office Sports wrote Tuesday that the network plans to expand their primetime dosage of Smith during the NBA Finals, including him hosting “solo editions of SportsCenter from the site of the Finals before every weeknight game” and “First Take primetime specials on non-game-nights, June 4 and June 17,” both along the lines of what they’ve done before. (And maybe that gets Smith closer to his goal of hosting a primetime or late-night show.)

At any rate, it’s clear that ESPN values Smith and is happy to keep promoting him despite his ever–lengthening list of on-air rants and mistakes. It’s also clear that they’re even fine with him buttering up Johnson and bashing their own reporting along the way. And they’ve done that before, as with Johnson’s blame-everyone-else appearance on First Take last week. Of course, it’s not unprecedented for ESPN figures to disagree, but the way this one played out is particularly unusual. As former ESPN editor Henry Abbott (a victim of the April 2017 layoffs) noted, there are some difficult choices for ESPN with this:

Telling the truth is difficult, painstaking, often thankless work. Not everyone has the stomach for it.

I think ESPN faces tough choices about whether it wants to nurture evidence-based reporting: https://t.co/JrSree7wKi

Or tear it down: https://t.co/lmt6jCLLOG

Baxter Holmes of https://t.co/m5iNPmKrqA published a deeply reported story today about the mismanagement of the L.A. Lakers. Here's his colleague, Stephen A. Smith, bemoaning on air that it came out the day he planned to do a softball interview with one of the story subjects. https://t.co/9DQS3czH8A

From Tuesday’s developments, there are reasons to wonder what ESPN is actually prioritizing. They published a pretty good story from Holmes, and then gave their highest-paid talent in Smith platforms to tear into it all day, never once asking for him to engage on the merits of the story rather than his own feelings about Johnson and the Lakers. They then gave Johnson, a figure highly criticized in that story, a national platform to get his side of it out with two uncritical interviewers.

And there are a whole lot of questions about why they did that in the first place; Johnson’s previous TV work for ESPN and ABC sure didn’t earn a lot of praise, and as his Twitter account shows, he’s not exactly the hardest-hitting analyst you can find. So it’s not really that clear why ESPN felt the need to bring him back for another show. But perhaps as a part of that relationship, ESPN’s TV side spent a lot of time praising him Tuesday, and a lot of time criticizing their digital reporting in the process. That’s unusual to see, and not a great sign for the actual journalism side of ESPN. But it’s a pretty good sign of what the Stephen A. Smith side can get away with.