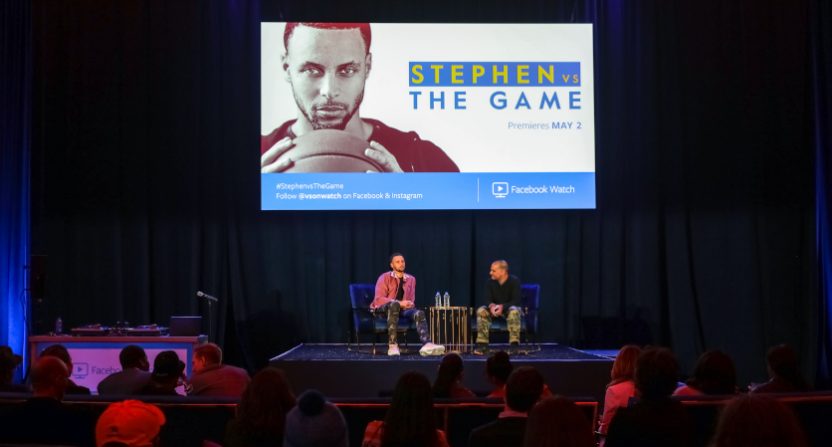 There’s no shortage of shows focusing on athletes out there, with Facebook Watch alone offering everything from Ball in the Family (LaVar and Lonzo Ball) to Tom vs. Time (Tom Brady) to Inside The Madness (Kentucky basketball) to Big Chicken Shaq (Shaquille O’Neal) to One Cent (Penny Hardaway). But the latest Facebook Watch show stands out a bit amongst that crowd. Stephen Vs. The Game (premiering May 2 on Facebook Watch) focuses in on Golden State Warriors’ star Steph Curry, and it’s directed by Gotham Chopra (known for Religion of Sports, Tom vs. Time and more). It’s a co-production between Curry’s production company Unanimous Media and Chopra’s Religion of Sports company. And at a premiere in Oakland Monday night, Facebook’s Dan Reed (vice president of sports and media partnerships, and a former NBA executive) said working with Curry was a natural fit for them.

“Steph Curry was tops on our list,” Reed said. “He’s really engaged with that broader community on Facebook platforms.”

It’s not just Facebook doing athlete profiles and behind-the-scenes documentaries, of course; those are prominent everywhere from Bleacher Report/Showtime to ESPN to the LA Media Fund. But Reed said one of their goals is making not just good content, but content people will want to interact with on Facebook and share to their friends there.

“We are trying to infuse the tenets of a social network inside a video platform.”

Meanwhile, Curry (in an on-stage conversation with Chopra after Reed’s remarks) said Facebook and Instagram have long been avenues for him to communicate with his fans, which made this a good fit for him.

“Obviously, I have an audience that I try to engage with,” Curry said. “…It’s very special for me to have this opportunity. We want to be really selective with the content that we create.”

Before Religion of Sports and Stephen Vs. The Game, one of Chopra’s big projects was the Showtime documentary Kobe Bryant’s Muse. Chopra said that Curry is much easier to work with, and that even Bryant probably would admit that.

“Every day with Kobe was a fight, every day with you is a pleasure. And that’s not a criticism; I think Kobe would appreciate that, actually.”

And that helps to speak to another difference with this show, too. A lot of athlete-involved series seem to have the athlete offering relatively minimal participation. Here, Curry seems pretty excited to be on camera, and pretty open with what he says. And that was true during his conversation with Chopra, too, as he also had some notable remarks on the NBA. He listed his top five players of all time as Michael Jordan, Wilt Chamberlain, LeBron James, Shaquille O’Neal and Magic Johnson, and said the toughest player for him to defend is his brother Seth (currently with the Portland TrailBlazers).

“When I’m defending him, he’s averaging like 90 points per game.”

The event saw the premiere of Stephen Vs. The Game‘s first episode, and that episode did something quite interesting for this genre of show. Yes, there was plenty of contemporary footage of Curry at his house, with his wife Ayesha and kids Riley, Ryan and Canon, in the Warriors’ 2018 championship parade and so on, but what was maybe more notable was how it worked in archival footage of him growing up, from home videos of old games to old TV interviews with his dad (Dell Curry, who played in the NBA for 16 seasons) where Steph was tagging along. It also incorporated current interviews with Steph’s parents, Dell and Sonya, which shed some light on how their son became who he is.

In particular, one comment from Dell on Steph’s success stood out, with him saying “My wife and I are always pinching ourselves, saying ‘Can you believe it’s our kid?'” But the documentary also looks back at how Steph competed in both baseball and basketball growing up, and how it wasn’t certain which sport he would follow. And it has Sonya saying that Steph grew from watching Dell, saying “He observed first and then he kind of emulated” and “He was athletic in a clumsy way at first, but he was so determined.” Meanwhile, Steph himself says “We always joke that I get my shooting from my dad and my toughness, my grit from my mom.”

Other elements in the inaugural episode were interesting, from Curry’s various workouts (tossing tennis balls with one hand while dribbling or defending with the other hand, swimming, training with weights) to his golfing in the annual American Century Celebrity Golf Championship in Tahoe to his interactions with his wife and kids (including making breakfast for them). And it also saw him saying he thinks he still has a lot more to do, saying “Even 10 years in, I don’t think that I’ve lost that joy. I feel like I still have more to accomplish.”

But it’s the look back at Curry’s upbringing and the interviews with his parents that made this feel particularly different from a more traditional look behind the scenes of an athlete’s life. The archival footage is notable and used well, and it helps provide more insight into who Curry is and where he’s come from. And beyond that, Curry displayed significant openness, and significant willingness to talk about his career and his life. We’ll see how the whole series turns out, but the first episode was certainly promising.

Stephen Vs. The Game premieres May 2 on Facebook Watch. All photos are by Kelly Sullivan/Getty Images for Facebook.