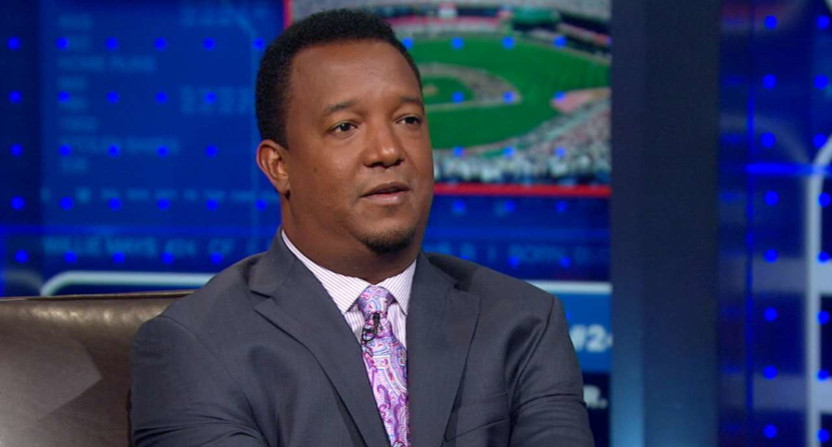 The Houston Astros’ electronically-aided sign-stealing saga has seen a lot of people surprisingly go after whistle-blower Mike Fiers, including ESPN baseball analyst and New York Mets’ baseball operations advisor Jessica Mendoza. Mendoza took a whole lot of flak for her comments on a trio of ESPN morning shows last week, including that Fiers “ratted out” everyone and that “To go public, yeah, it didn’t set well with me…and honestly, it made me sad for the sport that that’s how this all got found out.” Well, another prominent analyst who also works for a team has now joined Mendoza in criticizing Fiers; that would be MLB Network/TBS analyst Pedro Martinez, who also is currently listed as a “special assistant” to Red Sox  general manager Brian O’Halloran (alongside Fox analyst David Ortiz and NESN analyst Tim Wakefield). Martinez ripped Fiers to WEEI’s  Rob Bradford, Lou Merloni and Mike Mutnansky Tuesday:

“If you tell me that Mike Fiers is coming to my team and you already threw your team under the bus, the team that you used to play for … Now everybody knows you are going to have a whistle-blower in any other situation too,” the former Red Sox ace said. “Whatever happens in the clubhouse stays in the clubhouse and Fiers broke the rules. I agree with cleaning up the game. I agree that the fact that the Commissioner is taking a hard hand on this, but at the same time players should not be the one dropping the whistle-blower.”

There are some obvious problems with that logic, especially considering some of the suggestions of how prominent the sign-stealing practices were with the Astros. Internal pushback from one pitcher likely wouldn’t have accomplished much, and even if the team had decided to go away from that practice after player pushback, they likely would have kept it secret that they ever used it. There are benefits for baseball as a whole in this saga coming to light, as it impacted a lot of people beyond the Astros (especially those who played against them), and the public smackdown for that franchise and those involved will hopefully be a deterrent to avoid this happening in the future. And beyond that, this scandal has an notable impact on the Red Sox (who parted ways with manager Alex Cora, who was implicated in this during his time as bench coach in Houston, earlier this month), so Martinez’s role with the franchise needs to be considered alongside all this. So there are a whole lot of issues with what Martinez said here.

How much blowback that will eventually lead to is another question, though. Yes, Martinez has a dual role in the media and with a team, like Mendoza, but his unspecified “special assistant” role seems like more of a largely-ceremonial title for a former player than Mendoza’s “baseball operations advisor.” And Mets’ GM Brodie Van Wagenen has repeatedly emphasized that Mendoza is involved in decisions across the organization, especially when it comes to acquiring talent through trades or free agency. It’s also notable that Martinez, Ortiz and Wakefield weren’t even mentioned in that surrounding discussion of broadcasters and dual roles this past fall, so that suggests that the teams pushing back against Mendoza’s clubhouse access don’t view their Red Sox roles as too important.

That’s a contrast to other dual roles that were mentioned there, such as MLBN’s Al Leiter with the Detroit Tigers, then-ESPN analyst David Ross with the Cubs, and ESPN analyst Alex Rodriguez with the Yankee ( a role he’s since given up). Of course, “whether a team cares about a broadcaster’s role with another organization” is an imperfect standard, and that shouldn’t necessarily be what’s important here. But it’s also notable that the MLB players-turned-broadcasters are expected by many viewers to have at least some affinity for their former teams (whether they have a stated role with that organization or not). With Mendoza, there isn’t a natural connection to the Mets from a playing career, so it would seem to be much more important for ESPN to state that she also works for that team. (It’s also notable that Mendoza’s role as a Sunday Night Baseball analyst and also a contributor to other ESPN shows would seem to give her a fair bit more prominent national airtime each week than Martinez.)

Should Martinez face some pushback for these comments? Probably. Those remarks aren’t all that dissimilar from what Mendoza was blasted for, and at the very least, Martinez appears to be the latest in a long line of former athletes turned media figures who are still commenting as athletes rather than thinking about their new role in the media, or thinking about what’s best for the public. He probably isn’t going to get as much blowback as Mendoza did, but it’s worth keeping in mind that his comments were made on local radio rather than back-to-back-to-back on prominent national ESPN TV shows, so there are a lot of people who aren’t even aware of what he’s said yet. And we’ll see how the reaction develops in the days ahead.

An interesting larger question with this is if the practice of national network analysts also working for teams should be halted altogether. On some levels, it would be great if it was; that would enable viewers to trust that whoever they’re hearing on a national broadcast doesn’t have a current financial relationship with a particular team. But in reality, that seems unlikely to happen any time soon, and there’s clear value for both teams and broadcasters in these “special assistant” roles; the team gets to associate with a prominent analyst (who’s usually also a famed figure in their own franchise history) and gets to have a knowledgeable analyst work with their players in spring training or whatever, and the broadcasters get to make some more money for something that doesn’t particularly conflict (at least in terms of the calendar) with their broadcasting obligations. Maybe an easier answer is more frequent and more thorough disclosure that particular analysts also work for teams; that could allow viewers to have the necessary information and then make up their own mind on if comments from these analysts carry a bias or not.

In any case, the Martinez situation is certainly notable. And it’s a good reminder that the dual-role discussions do not, and should not, stop with Mendoza and the Mets. There are all sorts of these dual roles throughout baseball, and there are plenty of analysts willing to say controversial things. Just how comments like Martinez’s stack up to what Mendoza said can be debated, but it’s certainly notable that she’s not alone in the “broadcaster/team employee says controversial things about the Astros’ scandal” category.