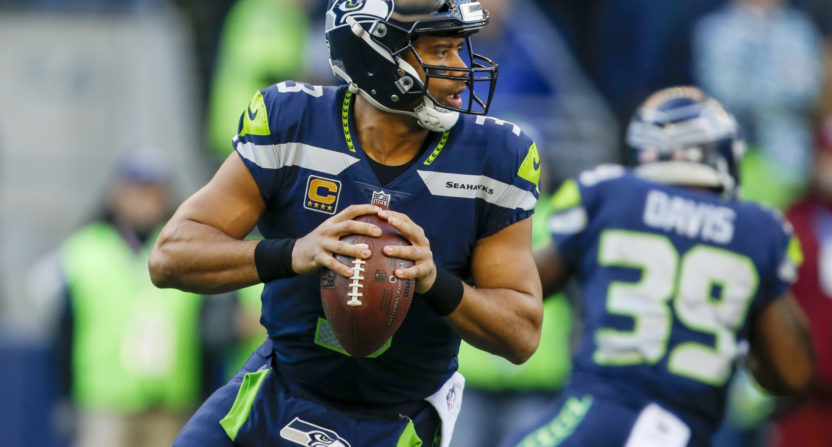 When Jon Gruden left ESPN to coach the Raiders, he left not only a vacancy in the network’s Monday Night Football broadcast booth but also a hole in its pre-NFL Draft coverage. For eight years, Gruden’s QB Camp was a spring staple on ESPN airwaves, providing a unique and compelling way for viewers to meet quarterback prospects. Gruden’s departure meant that would go away.

But as of Wednesday, ESPN has a worthy replacement for QB Camp. The new show will be called QB2QB, and it will be hosted by Seattle Seahawks Pro Bowler Russell Wilson, who will hold conversations with draft hopefuls, drawing on his own NFL experience.

Per an ESPN release, the network will air four 30-minute episodes, all on April 17, featuring quarterbacks Baker Mayfield, Mason Rudolph and J.T. Barrett, along with running back Saquon Barkley.

“Russell is an ideal mentor for these young players entering the NFL. He overcame a fair amount of skepticism when he joined the league and worked hard to become one of the NFL’s top players,” said ESPN Monday Night Football producer Jay Rothman, who will oversee the project along with producer Josh Hoffman. “Our QB Camp series with Jon Gruden highlighted the relationship between coach and quarterback; this new iteration of the series will now explore the mentoring relationship between NFL veteran and these soon-to-be rookie players.”

Wilson is a good get for ESPN. He is one of the NFL’s best and most famous players, and he knows how to handle himself on-camera. There might be a learning curve given his lack of TV experience, and it might be difficult for him to recreate Gruden’s distinct brand, but Wilson’s name and pedigree alone should draw viewers to the new show.

Wilson, who appeared on Gruden’s QB Camp in 2012, said in the release that the show “was one of my favorite experiences of the NFL Draft process because it helped prepare me for some of the physical and mental demands of playing in the NFL.”

It’s unclear whether ESPN views Wilson’s show as something it can maintain and expand in the future or whether it’s a one-off deal for 2018, but the generic QB2QB name could presumably allow the network to continue the program in future years with a different host or continue with Wilson. At least for now, Gruden’s QB Camp has a successor.