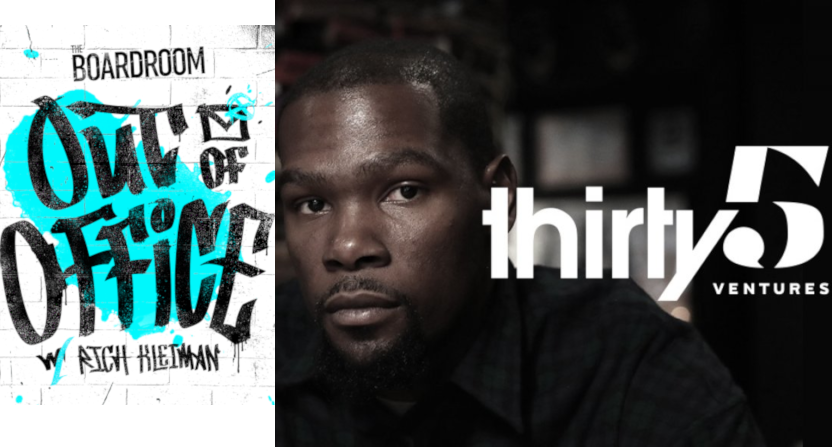 Kevin Durant and his manager Rich Kleiman have produced some interesting content through their company Thirty Five Ventures, from ESPN+ show The Boardroom to documentaries like Basketball County and Q Ball. And Durant has been a frequent guest on other podcasts, from The Bill Simmons Podcast to Pull Up With CJ McCollum to Knuckleheads (with Quentin Richardson and Darius Miles) to Play For Keeps. Now, Durant and Kleiman are starting their own podcast network, and they’re teaming up with established podcasting company Cadence13 (now owned by radio conglomerate Entercom) for that. Here’s more from a Cadence13 release:

Cadence13 is partnering with Kevin Durant and Rich Kleiman’s Thirty Five Ventures’ to create The Boardroom Podcast Network, which includes new and original podcasts hosted by both Durant and Kleiman, including one focused on the business of sports, and the other on breaking down key moments in sports, culture and entertainment. Durant will serve as a curator and Executive Producer for the network and the future buildout of The Boardroom Podcast Network.

And here’s an audio trailer:

This will be an interesting effort to watch. Durant and Kleiman are clearly recognizable figures, and at this point, they’re also somewhat-established content creators. And podcast networks are a big thing these days, and even NBA-player-founded content networks are doing well (as LeBron James, Steph Curry and others have shown). So there would seem to be some appeal to this.

And Durant and Kleiman are partnering with a company that’s found some success with a variety of sports podcasts. But still, podcasts can be a harder sell for some listeners in a time where there’s much less commuting. And there are already a lot of sports and sports business podcasts out there, so this isn’t an easy marketplace to enter. We’ll see how these podcasts from Durant and Kleiman perform, and how the future “buildout” of this network goes.