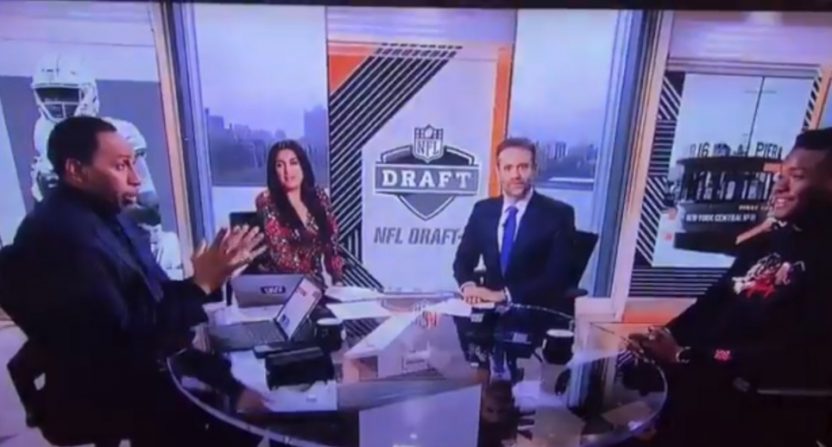 It’s always interesting to see a sports pundit reverse course on a take, especially after they’ve previously doubled down. It’s even more interesting when the reversal comes while talking to the take’s subject face to face. That happened with ESPN’s Stephen A. Smith on Friday.

Back in February, Smith took a lot of criticism for claiming that Ohio State quarterback Dwayne Haskins Jr. was “more of a runner than a thrower” (despite Haskins passing for almost 5,000 yards and running for just 108 in 2018), and he initially doubled down on that even after backlash, saying “I view his athleticism as more of a plus,” “I don’t view him as an ideal pocket passer” and “I’ve got to see him be that pocket passer that everyone swears he is on the NFL.” However, when ESPN booked Haskins on First Take Friday, Smith reversed course and offered an in-person mea culpa:

With Dwayne Haskins in studio on First Take, Stephen A says he went back and watched the tape, and that he was an 'ignorant fool' in his past Haskins analysis pic.twitter.com/AVkIoRocz9

“I just want to say welcome to the show. My apologies for being so ignorant about you. He was on the money with you,” Smith said, pointing to co-host Max Kellerman.

“Me, I was an ignorant fool. I had to go back and watch the tapes. My bad.”

That is not the first time “ignorant fool” or something similar has been used to describe Stephen A. Smith, and it probably won’t be the last, but some credit is due to him for finally admitting he was so incredibly wrong. Even if it took months, and even if it took the player in question showing up in studio. But, you know, maybe Smith should have “watched the tapes” before boldly declaring Haskins was “more of a runner than a thrower” and then doubling down on that inaccurate take. Or at least looked at the stat sheet.

Guess none of that is a requirement for the wannabe $10-million-dollar man, though…