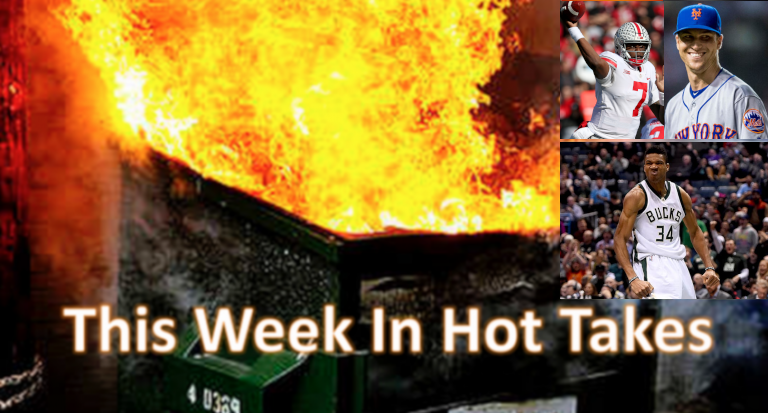 Welcome to another edition of This Week In Hot Takes. This time, we’re looking at the hottest sports takes from Feb. 8-14.

5. Phil Mushnick claims MLB commercial endorsed “acts of obnoxious and risky immodesty”: New York Post curmudgeon Mushnick has again crawled out from under his rock to complain about how things have changed. This time around, he spends most of his column bashing MLB’s switch from “disabled list” to “injured list,” but it gets particularly hot-takey once he goes into his regular rants about how he doesn’t like today’s game of baseball. He starts with the old canard of “people don’t always run to first base, and it’s awful!”, then complains about last fall’s MLB commercial that featured players enjoying the game and criticizing those who went after their celebrations:

“Running to first base is now optional, even rationalized as acceptable. And with commissioner Rob Manfred’s full public approval, MLB last year launched a campaign to encourage kids to have “fun” playing baseball by performing acts of obnoxious and risky immodesty, including bat-flipping on expected home runs.”

“Acts of obnoxious and risky immodesty” sounds much more salacious than “bat flips.” But it’s in line with previous Mushnick takes, like his description of an Antonio Brown twerking touchdown celebration as “a vulgar groin-thrusting TD dance that mimed copulation.” Mushnick must be living in an alternate universe Bomont, Utah, one where a great hero named Kevin Bacon never came by to teach an entire community of people with sticks up their butts that dancing is the greatest thing there is.

4. Rob Parker declares Tom Brady isn’t getting a seventh Super Bowl ring, says he was “along for the ride” and “lucky to get a sixth ring”: FS1 hot-take artist Rob Parker (formerly of ESPN before the whole “cornball brother” debacle) has been going off on Tom Brady and the New England Patriots recently, including unsupported claims that Brady is cheating and “will become like Lance Armstrong without the bike” and calling him “the L.O.A.T., the Luckiest Of All Time.” The team’s Twitter account has made fun of Parker’s takes and his inaccurate predictions, but that hasn’t stopped Parker from doubling down. He most recently did that on Undisputed this week, insisting there’s no way Brady will win a seventh title and claiming that his sixth title was “lucky”:

Even moderator Jenny Taft appears to recognize the absurdity of Parker’s Patriots rants, introducing this with “Rob, you have a special love in your heart for Tom Brady and the Patriots. What do you think, is he going to get a seventh ring?” Parker responds with “You know he’s not going to get a seventh ring, stop it. He was lucky to get a sixth ring. …Tom Brady was along for the ride. Can I remind you about the Super Bowl? Tom Brady looked more like Peter Brady.”

Look, it’s not unreasonable to point out that Brady’s Super Bowl LIII performance wasn’t one of his best, and that the Patriots’ win was about more than just him. But he completed 21 of 35 passes for 262 yards with one interception in the end, and outdueled the Rams’ Jared Goff (19 completions on 38 attempts for 229 yards, also with one interception), and did enough to win a low-scoring defensive game. Just ignoring that the way Parker does isn’t particularly rational.

And absolutely, there are reasons to wonder how long the 41-year-old Brady can continue to play at a high level, and if the team around him will be good enough and will get the right breaks to win another Super Bowl, but it’s possible to raise those questions without just declaring “You know he’s not going to get a seventh ring.” But that would be actual insight rather than hot takes, and that’s not what Parker is known for.

It might be time to throw another retirement party for this guy. pic.twitter.com/AXUG5t0yy6

In which Stephen A. Smith says that Dwayne Haskins is “more of a runner than a thrower.” pic.twitter.com/Gtowi8y0Pp

Haskins threw for 4,831 yards last year and ran for 108 (on 79 carries, mostly in short yardage), so no, he is not “more of a runner than a thrower,” and there seems to be absolutely nothing to justify that take other than bad stereotypes about black quarterbacks. And whether this is a result of Stephen A. being spread too thin or just being a ridiculous and uninformed pundit in general (there’s plenty to support the latter theory too), it certainly led to an insanely stupid take.

1. Michael Kay blames Phil Jackson for not scouting or drafting Giannis Antetokounmpo, forgetting that Jackson wasn’t running the Knicks then: In further counterfactual takes, here’s Michael Kay on his ESPN New York show (simulcast on YES) bashing Phil Jackson for the Knicks reportedly not scouting Giannis Antetokounmpo in 2013 and then not drafting him:

Michael Kay blasts Phil Jackson and the Knicks for not scouting Giannis Antetokounmpo prior to the 2013 NBA draft, and for not taking him before Milwaukee did. He then learned that the Bucks picked 9 spots before New York that year, and Phil got the Knicks job in 2014. ????????????????! pic.twitter.com/vwKOGJPkOG

Yeah, even the claim that the Knicks didn’t scout Antetokounmpo (made in TNT’s Finding Giannis documentary, which premieres Saturday night) is disputed by the team, so that maybe wasn’t the best thing to go off on in the first place. And as Funhouse notes there, the Knicks picked 24th overall in the 2013 draft (taking Tim Hardaway Jr.), so they wouldn’t have been able to land Antetokounmpo (who went 15th overall to the Milwaukee Bucks) anyway without some trading. But blaming Jackson for this is really ridiculous, as he wasn’t even with the Knicks until the next year.

It’s unclear that the Knicks could have or should have done much different in this case, but it was then-GM Glen Grunwald who would have been in charge in the lead-up to the 2013 draft, not Jackson. And Kay finding that out on-air after his anti-Jackson rant is pretty funny. There are a lot of things to criticize Jackson’s Knicks tenure for, but this isn’t one. But hey, at least this week’s hot take roundup is one area where Kay managed to outrate Francesa.