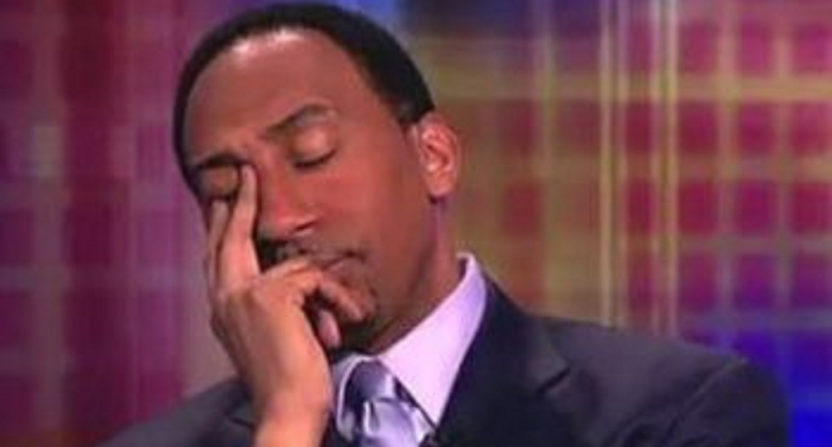 ESPN personality Stephen A. Smith has been a target of plenty of mockery over the years, including from the Stephen A. Smith Heckling Society of Gentlemen. Post-Heckling Society, much of that mockery has come on Twitter, and there are two classic tweets that stand above the crowd and are regularly passed around to this day; David J. Roth’s take on Smith at a PF Chang’s, and Trevor Strunk’s take on Smith and Skip Bayless discussing the Holocaust:

STEPHEN A: Skip I want to ADDRESS this issue.
[BAYLESS nods]
You KNOW I am sensitive to the Holocaust
BAYLESS: Absolutely
STEPHEN A: BUT!

Dennis Young wrote an excellent piece for The Awl about how Roth’s tweet still holds up five years later, featuring comment from Spencer Hall and others on the tweet. But the most notable quote in there may come from an anonymous source described as an “ESPN on-air personality,” who told Young the Crab Rangoon tweet sums up Stephen A. perfectly:

Stephen A. is an absurd character, but also the most gifted performer on television. He is incredibly good at delivering lines with a gravity that the subject doesn’t deserve…The idea of him reacting to a random obscure menu item like that is the perfect sitcom version of him making his way in a world where everything is so much less important than how he talks about it.

This is quite true, and something that’s been noted about Smith before (in our Heckling Society piece, Will Leitch talked about how Tommy Craggs summed Smith up with “His one skill is he can be emphatic on command”), but it’s fascinating to hear those kinds of criticisms coming from inside the house. Of course, it’s probably not a great secret that many ESPN colleagues (especially those involved in more serious journalism) don’t really like Smith and his absurd takes, but having someone call Smith “an absurd character” and one “where everything is so much less important than how he talks about it” is a notable level of criticism, even anonymously. And it’s further proof that there are many inside Bristol who are getting pretty tired of Smith’s act, and of him being paid millions to do it and complain about it.

Young’s piece on the whole is worth a read, and it features a solid discussion of how Smith uses big words to try and extend an argument when he isn’t quite sure where it’s going, how he loses the thread halfway through some points, how his act has become so distinctive that everyone can imagine how he’ll say particular words, and how he plays himself into a comic-book villain on occasions, especially when threatening athletes. It’s also notable for mentioning that Roth and Strunk find the other’s tweet even better than their own:

@Hegelbon, aka video game writer and podcaster Trevor Strunk, prefers crab Rangoon to the Holocaust. To Strunk, Roth’s tweet is so good because “it presupposes Stephen A. Smith goes through his entire life as his persona, getting as riled up about crab rangoon as he does about, say, James Harden…[Roth’s] was a more cohesive joke.”

Roth, a talented sportswriter who was idiotically laid off by Vice Sports last week, but who is also wrong here, believes Strunk had the better viral Smith tweet. “His is actually a critique of how terrible that show is, and the specific type of terribleness that it embodies, where mine was just funny sounds.”

But, whether you prefer your Stephen A. jokes to be about Crab Rangoon or the Holocaust, it’s clear that both of those jokes have stood the test of time. And even found appreciation inside ESPN.