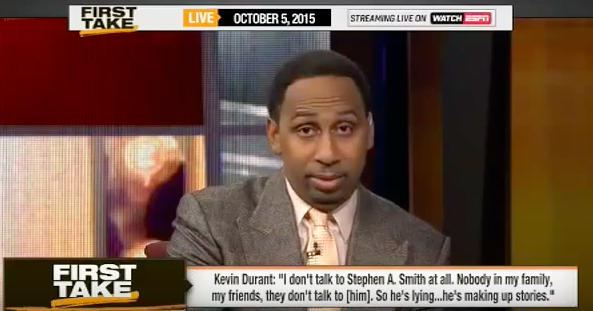 Go ahead and mark October 5th, 2015 as the date ESPN officially turned into WWE.

For all of the insanity that First Take has produced over the years, the following is maybe the most surreal moment from the worst sports show of all-time.

Stephen A. Smith and Kevin Durant have been feuding in the last few days.  To catch you up, it started when SAS reported that Durant was considering the Lakers as a possible free agent destination were he to depart Oklahoma City.  Durant issued a strong denial and even went as far as calling Smith a liar because nobody in his inner circle talked to him.

On Monday’s First Take, Stephen A. Smith quietly let the controversy die down to have a level-headed discussion about the MLB postseason and putting Jake Arrieta’s second half in proper historical context.  Wait, scratch that.  Smith delivered a hellfire and brimstone speech that contained some not-so-veiled threats against Durant.

The video of Smith’s 10+ minute rant against Durant starts with an extra-long soliloquy featuring Smith bragging about his reporting chops and alternately showering praise upon Durant for being a nice guy and hammering him for calling him a liar.  It’s only worth the ten minute plus watch if you want to see what it looks like when someone slowly becomes unhinged on national television.  The way Smith bounces back and forth between complimenting Durant and hinting that he could easily dig up dirt that would ruin his career is a study in schizophrenia.

But it’s the end of the rant where it really goes off the rails and Stephen A. looks at the camera and threatens Durant like he’s a real life professional wrestling villain.  Stephen A. hasn’t looked at the camera directly like this since he apologized for saying women brought domestic violence upon themselves in order to save his job, so you know he must be serious.  Fast forward to the 11:30 mark if you want to go there directly.

A transcript of the climactic and foreboding threat Smith made to Durant:

Smith has every right to defend his reporting, but the decision to kick it up a zillion notches and issue this very specific threat to Kevin Durant defies all forms of logic, belief, and explanation.

Smith went on to issue more ominous words at the end of the above clip by saying, “You will never have the last word” and adding:

“This implication that I don’t know stuff?  Y’all better think twice about that… I can find out in ten minutes at a basketball arena then I can on the phone with fifty different people inside two weeks.  Think about that and ask yourself do you really want to go there.”

This is far from the first time this question has been asked, but alas, here we are again… what is wrong with you, Stephen A. Smith?!?!?!  The way new moderator Molly Qerim tries to wrap up the clip by saying Smith and Bayless’ haters are truly fans is also cringe-worthy.

Is this the new thing at ESPN?  On-air commentators issuing severe warnings to the athletes and coaches they’re supposed to cover?  Are we going to see Sal Paolantonio cut an Ultimate Warrior style-promo on Chip Kelly, next?  ESPN uploaded the entire video of this exchange on First Take so they’re definitely proud of all of this for some strange reason.

Never forget: ESPN is laying people off by the hundreds so that they can pay Stephen A. Smith $3 million a year to hijack several minutes of national television airtime to deliver threats to NBA players.  Good job, ESPN.