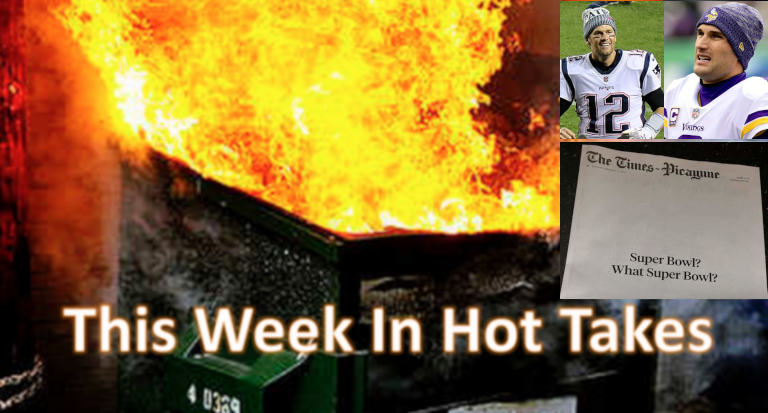 Welcome to another edition of This Week In Hot Takes. This time, we’re looking at the hottest sports takes from Feb. 1-7. (Note: Jason Whitlock’s insane “Is being an only child part of the reason a toxic environment follows LeBron James? is not included because of Whitlock’s Hot Take Hall of Fame status.)

5. Skip Bayless says Kevin Durant “do rant”: Plenty of media went in on Warriors’ star Kevin Durant after Durant’s complaints about media this week, but FS1’s Bayless did so in particularly silly fashion:

Kevin Durant has the perfect last name because he 'do rant.' He rants, he rants, and he rants. Every other day he's ranting about something. He bites the hand that feeds him. More @Undisputed, now on FS1 https://t.co/UgePuCj2qt

As many have said before, by that logic, Skip should bay less. Or just stop talking altogether.

4. Mike Florio wonders if the Rams will “make a play for Kirk Cousins in two years”: Being critical of a player after a big-game loss is one thing (although it’s worth pointing out that it’s still just one game, and that it usually doesn’t override their larger body of work), but it’s something else to take that to the level of mapping out plans to replace them two years down the road with someone who many don’t think is all that good. That’s what Pro Football Talk’s Mike Florio did this week, though:

Will Rams keep Jared Goff for the long haul, or will Sean McVay make a play for Kirk Cousins in two years? https://t.co/1GynSiBj9q

Fresh from a disappointing performance in Super Bowl LIII, it’s fair to ask whether the Rams will keep quarterback Jared Goff beyond the expiration of his rookie deal. Especially given that Goff’s remaining contract matches the duration of another contract that, once expired, could attract the attention of Rams coach Sean McVay.

Goff has one season left on his base deal, plus an option year for 2020. Vikings quarterback Kirk Cousins has two years remaining on a three-season, $84 million contract. Maybe, just maybe, the Rams will decide after Goff’s deal expires to let him walk away — and to embrace Cousins.

McVay worked with Cousins in Washington, and McVay continues to have a high opinion of Cousins’ abilities. With Goff playing well enough during McVay’s first year in L.A. to make keeping the 2016 first-rounder around a no-brainer, McVay’s team never was in the market for Cousins.

Of course, Goff’s performance could fall off a cliff, and the Rams could have to go looking for a replacement after 2020-21 (or even sooner). But it seems a bit silly to not only predict that thanks to one bad game against a tough defense, but to even lay out a specific replacement the Rams might target, and one that doesn’t feel like an upgrade to many. Maybe Florio will be proven right in the 2021 offseason, and if so, we’ll reduce his points accordingly then. Until then, this feels like a hot take.

3. Trey Wingo says “Shut the hell up!” to those who watched Super Bowl LIII and criticized it: News for Trey, people can consume something and discuss it without being in love with it. Especially when it’s a cultural event on the level of the Super Bowl. And it’s also not unreasonable to watch a game to see who wins while still saying the game isn’t particularly good. But Wingo went in on all of that this week, ranting that those who weren’t thrilled with Super Bowl LIII should have stopped watching:

“SHUT THE HELL UP!”@wingoz on the fans who complained for 4 hours, but wouldn’t stop watching the Super Bowl.

“YOU PEOPLE ARE THE WORST!” pic.twitter.com/xJzQqCSRnT

“Shut up! Just shut up. If you don’t want to watch, then don’t watch! Go watch the Raptors and the Knicks. Go do something else. But don’t sit there for four flippin’ hours with your eyes glued to the game and say, ‘Oh, this is so boring, but I can’t stop watching.’ … Just shut the hell up! I mean, give me a break. If you don’t want to watch it, then don’t watch it! But don’t watch the game and sit there and go, ‘I hate it.’ That’s the worst. And you people who did that, you’re the worst! The absolute worst.”

Nah, the absolute worst is when ESPN pundits criticize consumers’ viewing behavior just because they feel like it.

2. Dan Crenshaw asks if someone should propose a 70 percent tax on the Patriots: This is a sports column, not a politics column, but sometimes the politicians don’t stick to politics. That was the case with Texas congressman Dan Crenshaw this week, who in an attempt to make a point against fellow representative Alexandria Ocasio-Cortez’s floated 70 percent marginal tax rate, wondered if the Patriots should have a 70 percent tax imposed on them:

Should someone propose a 70% tax on the Patriots so that NFL competition is more fair and equal? Asking for a friend.

This is dumb on a few levels. First, the proposal there isn’t close to an actual proposal yet, it’s an idea floated by one congresswoman. Beyond that, it’s not a 70 percent tax in general, but a marginal tax; in this case, she’s proposing a 70 percent tax rate only when it comes to income beyond $10 million annually, a marginal rate that corresponds to (or is below) the top rate from 1936-81. So Crenshaw’s first misstating what the actual proposal is. And he’s then ignoring that professional sports leagues do actually “tax the rich” in a variety of ways that go well beyond “a 70 percent tax”, from luxury tax penalties to salary cap penalties to lower draft picks for teams that do well. Thanks to winning the Super Bowl, the Patriots are going to pick dead last in the first round of April’s NFL draft; that’s a much more radical handicap for success than anything proposed on the tax front.

1. Tom Jones calls the Times-Picayune‘s blank front page after the Super Bowl “a waste of newsprint”: Many in Louisiana have been salty after the Saints’ NFC championship game loss to the Rams and the blown call late in that game,  which prompted protest from the governor, congressmen and a senator, led to a lawsuit, saw Saints’ head coach Sean Payton wearing a Roger Goodell clown t-shirt, led to snarky forecasts from local meteorologists, and also prompted a fan boycott of the Super Bowl that saw a 51 percent year-over-year drop in that game’s rating in New Orleans, from seventh amongst metered markets last year to 56th  and last this year. The New Orleans Times-Picayune covered that in amazing and appropriate local style:

But front-page snarkiness thoroughly appropriate for a city’s boycott of the Super Bowl? That offended The Great Journalism Arbiters On High at Poynter, where Tom Jones blasted the Times-Picayune in a Super Bowl roundup column:

Combine middle-school humor with plenty of bitterness and what do you get? Monday’s front page of the Times-Picayune.

Because the Super Bowl was super boring and, mostly, because New Orleans still is ticked about a bad call that possibly denied the Saints from reaching the big game, the front page of the entire paper was blank except for these words:

Readers probably found such a front page cute and, certainly, the Times-Picayune got some national publicity out of its little stunt. But, ultimately, this is a disservice to the readers. Instead of a juvenile prank, how about doing what subscribers pay you to do and put actual news on the front page of the newspaper? It didn’t have to be Super Bowl related. There was plenty of other news in the world to inform readers.

Yeah, that all sounds good in theory. But when it’s your job to provide news, opinion and perspective, the worst thing you can do is give the readers … nothing. And, while we’re at it, it would seem the Times-Picayune forfeits the right to complain about the cost of newsprint when it wasted an entire front page like it did Monday.

Besides, the Saints had plenty of other opportunities to win the NFC Championship, so time to get over it already.

Oh, that is not even close to “a disservice to the readers.” The Times-Picayune served its readers in the best way it possibly could, as the local reactions to that illustrate. And the “nothing” here was still “news, opinion and perspective”; it was a commentary on the city’s boycott of the game. That’s far from a “waste” of an entire front page, and that front page probably sold many more copies than regular Super Bowl coverage (or anything else) would have, so “won’t someone please think of the cost of newsprint?” is disingenuous at best.

Jones is really illustrating how little he connects to today’s newspaper readers with this take, and he’s showing how he’s really the one “stodgy, boring and stuck in his ways.” The Times-Picayune did something fun and appropriate and was generally praised for it, but the “won’t someone please think of the newsprint!” guy had to chime in. And if people wanted Super Bowl coverage, there are a million other places for them to get it, but only one making that kind of front-page stand against it. Also, let’s just point out that the Times-Picayune‘s non-coverage of the Super Bowl was much more meaningful and appropriate than ESPN ombudsman-at-the-time Poynter’s non-coverage of the Craig James/Bruce Feldman saga. Now THAT was “a disservice to the readers.”