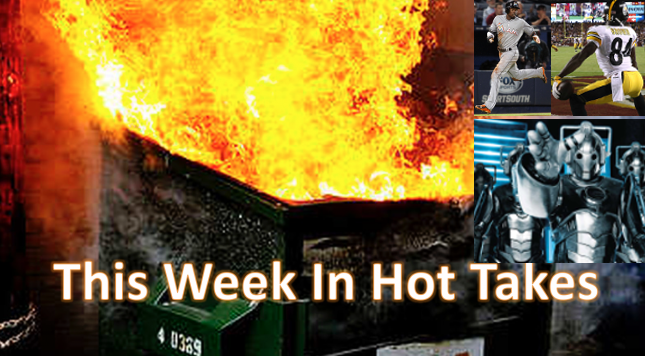 In a world that has embraced debate, there are many hot sports takes out there in any given week, and they’ve been termed “one of America’s greatest exports.” But which takes can stand out in that crowded environment? And which personalities consistently bring the most heat? That’s what we’ll track with a new Awful Announcing feature, This Week In Hot Takes, counting down from the fifth-hottest to the hottest. We’ll be keeping an ongoing leaderboard where we’ll eventually crown a king or queen of Hot Takes. Here’s the latest edition covering Sept. 23-29, from your friendly neighborhood keyboard bully…

5. Stephen A. Smith calls Rex Ryan “mentally weak”: After Buffalo Bills’ head coach Rex Ryan got annoyed with New England media asking him about his own claim to be an “above-average coach,” ESPN’s Stephen A. Smith went off on Ryan on Thursday’s edition of First Take:

“To be on year six where you’ve missed the playoffs and you still talk as much as you talk is bad enough, but then when you turn around and get ultrasensitive when somebody brings up FACTS! that contradict all the stuff you’ve bloviated about, and get all sensitive, when that ultimately is your answer to every question that follows, it shows me that you’re mentally weak, that you can’t take what you dish out, and it also shows me why your teams ain’t making the playoffs, because you’re busy being friends and getting along and having players stand up and speak out on your behalf because they like you so much. Nobody took the time to recognize that the fact that the subject of your potential firing was invading the headlines spoke to the absence of productivity that you were doing!

So for me, it’s like you turn around and you talk, talk, talk but you don’t back it up. You talk, talk, talk about winning, but you lose. You bloviate about what you’re going to do but you don’t do it. Then you get called out on it and you get sensitive about it. And to top it all, you still ain’t winning! I’ve been on the record, Marvin Lewis needed to go years ago, because you shouldn’t have 12 straight years where you can’t win a damn playoff game. How am I going to talk about Marvin Lewis, who’s been to the playoffs by the way the last five years, and not talk about Rex Ryan, who’s missed the playoffs the last five years?”

Hilariously, this whole rant could read like an indictment of Smith himself, as he’s known to get ultrasensitive when somebody brings up FACTS! that contradict all the stuff he bloviates about (and also Cheez Doodles). He’s always busy trying to be friends with his subjects, too.Seeing him complain about someone else “talk, talk, talk, but don’t back it up” is pretty amazing, and the tortured sentence construction of “Nobody took the time to recognize that the fact that the subject of your potential firing was invading the headlines spoke to the absence of productivity that you were doing!” is peak SAS.

Unfortunately for Smith, though, this rant’s grounded in enough reasonableness (it ignores Ryan’s four playoff wins and two AFC championship game appearances, but SAS is far from the only one who’s criticized Ryan’s recent record and his interactions with the media) that it’s not higher on our scale. Better turn up the heat next week if you want that Skip Bayless money, Stephen.

4. Booger McFarland: Les Miles was “a stubborn old man that didn’t want to change”: SEC Network analyst and former LSU defensive tackle Anthony “Booger” McFarland has been one of Les Miles’ biggest critics for years and called for his firing last year, so it’s not particularly surprising that he took an appearance he was somehow granted on SportsCenter with Scott Van Pelt Monday to gloat after Miles was actually fired on Sunday.

There have been plenty of hot takes in the wake of Miles’ firing, including absurd suggestions from the likes of CBS Sports’ Rick Neuheisel that Nick Saban might leave his perfect situation at Alabama to return to LSU, but McFarland’s segment here stands out for the sheer volume of hot air spilled without any actual points made. The overall appearance was one of the most insipid, least analytical and least insightful pieces of television you’ll find:

There’s a whole lot of dumb in that conversation, from the insistence that Miles “was a stubborn old man who didn’t want to change” (the Tigers tried plenty of offensive changes over the last several years, just without much success) to the argument that spread offenses are the only ones that work to the idea that LSU should be beating Alabama based purely on the amount of in-state talent in each state (that’s not how recruiting works, as both schools draw lots of out-of- state talent, and recruiting has not been the main issue: LSU continually pulled in top-10 classes under Miles, including Rivals’ #2 class in 2014 and their #5 class this year), but in general, it’s just a former player pounding his own chest to praise himself for his previous hot takes. The real travesty is that this received nearly five minutes of ESPN airtime.

3. Greg Mitchell says Dee Gordon “cheated his way to batting title” in wake of Gordon’s Jose Fernandez tribute: Gordon, the Marlins’ infielder, delivered one of the most amazing tributes to Fernandez on Monday. The whole team wore #16 jerseys in honor of their fallen teammate, and Gordon, a lefty, led off against the Mets and took the first pitch from the right side in honor of Fernandez. He also wore Fernandez’s batting helmet. He then switched to his normal left side, crushed his first home run of the season, and broke down in tears rounding the basepaths. Given Gordon’s earlier Instagram tribute to Fernandez, it was a particularly poignant moment, and one even Mets’ broadcaster Gary Cohen called “phenomenal.”

And then, in the middle of all the celebrations of this on Twitter, a man who doesn’t even cover baseball or sports decided to rain on everyone’s parade by noting that Gordon received a PED suspension last year. That would be former Editor and Publisher editor-in-chief Greg Mitchell, who tweeted the following and then deleted it (screencap via Tim Ryan of The Big Lead):

If you ever need the perfect example of what "poor timing" looks like, keep this tweet by noted AssClown, @GregMitch handy. pic.twitter.com/Bln4IvZeV4

Complaining about PEDs is one thing, but as Ryan notes, this is the worst timing imaginable. Spoiling a moment like that with a “Well actually, he was busted for PEDs, so he’s terrible” is quite hot. There have been other stupid takes on Fernandez’s death and Gordon’s tribute, from a Florida congressional candidate poorly linking Fernandez to anthem protests to former ESPN, SB Nation and Fox Sports baseball writer Rob Neyer (who’s rating hundreds of Portland coffee shops these days?) suggesting Bartolo Colon threw Gordon an easy pitch (because a Mets’ pitcher is totally doing that in the middle of a fight for a wild-card berth), but Mitchell’s tweet stands out for its complete and utter tone-deafness.

2. Phil Mushnick: Antonio Brown performed a “vulgar groin-thrusting TD dance that mimed copulation”: It’s hard to find a better example of “old man yells at cloud” than this New York Post column from Mushnick, written in response to Antonio Brown’s touchdown twerking, suggesting that NFL players are the worst and the Olympic athletes who helped each other are the best, and titled “Vulgar is the new normal if you want to be a star in the NFL.” It’s the description of Brown’s dance that really takes this to a new level:

Last month, when the Steelers’ otherwise talented receiver Antonio Brown signed a new deal, ESPN identified him in video only for playing the dancing, preening fool after touchdown catches. But with TV’s steady blessings why wouldn’t he?

Naturally, ESPN hired Brown to star in a “SportsCenter” promo. Then, in ESPN’s “Monday Night Football” opener, Brown likely felt obligated to top himself, performing a vulgar groin-thrusting TD dance that mimed copulation. He was penalized 15 yards — as if he cared — while not even the replay of his repugnant act produced a discouraging word from Sean McDonough and Jon Gruden in the booth.

1. Jason Whitlock has thoughts on “cyberhumans”:

No, no, Jason, the Doctor Who villains are the “Cybermen.” Unless some PC bro convinced you it should be gender-neutral? Anyway, Whitlock appears to have about the same understanding of “cyber” as Donald Trump. That might help explain how Whitlock’s one of the few humans (or cyberhumans) on the planet who not only thought judging Monday’s debate as a boxing match was a good idea, he’s one of the few who thought Trump won:

I'm not voting for either one of these people…. Trump won debate in real world w his tone. Media/Twitter will spin it that Hillary won.