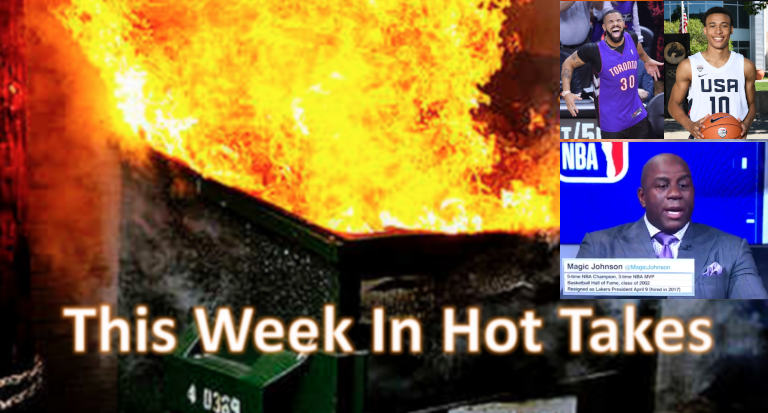 Welcome to another edition of This Week In Hot Takes, back after a one-week vacation. This time around, we’re looking at the hottest sports takes from May 24-30.

5. Bob Ryan calls WAR “pretentious nonsense”: While we’re past the Fire Joe Morgan era of columnists and broadcasters regularly criticizing advanced baseball statistics, there are still definitely some who hate any mention of the likes of wins above replacement. And Bob Ryan of The Boston Globe seems to fall into that camp, calling fWAR (Fangraphs’ version of WAR) “pretentious nonsense” in a tweet to Buster Olney:

Buster: respect you, but you assume we all give a $@/$&?@ about fWAR. Don’t need that pretentious nonsense to know Bellinger is having a helluva year.

Well, Bobby, that “pretentious nonsense” actually does a better job of tracking Bellinger’s overall contributions than traditional stats (what would you use for defense without it, fielding percentage?). But yeah, much of the world gives more of a $@/$&?@ about WAR than they do about Bob Ryan.

Drake has succeeded in making the NBA playoffs all about Drake, even if he couldn’t dunk with flubber on his sneakers. Now, with his bottomless thirst for attention, Drake has a chance to take over the NBA final, and there is no indication that the Raptors or the league have the stomach to rein him in.

Drake, with his antics, disrespects the city of Toronto, the Raptors, the game of basketball itself. Why? As we saw during his stint as perhaps the least funny host in the history of Saturday Night Live, he has none of that ability for gentle self-mockery necessary for comedy; if he were more self-aware, he wouldn’t act the way he does.

Instead, Drake has already made himself a bigger fool than Spike Lee. Where Lee pulled his self-aggrandizing tactics from a corner of Madison Square Garden and Jack Nicholson contented himself with acerbic wisecracks from his seat at centre court, Drake behaves like a pampered toy poodle at a Doberman convention.

…It’s a pity, because Drake’s clownish antics deflect attention from a very good Toronto team and especially from its star player, the self-effacing Leonard. This should be Leonard’s show, and instead it belongs to a delusional hip-hop star who only thinks he belongs in the NBA.

Old white men complaining about Drake is funny enough in its own right, but it gets even funnier when it’s taken to this level of “disrespecting basketball itself.” And it’s also pretty funny to see Todd discuss anyone else as “self-aggrandizing,” given his long and often unsuccessful history of trying to make himself seen as an important figure on the Montreal sports scene. And this isn’t new for Todd; let’s consider his string of comments on P.K. Subban, for example, which also included him saying Subban interviewing a teammate was him “needing to be the centre of attention.” The only person Todd wants as the center, or centre, of attention is himself. And he managed that Friday by reigniting the always-simmering Toronto-Montreal rivalry, saying many Toronto fans “don’t know a pick-and-roll from a Tootsie Roll”:

Gotta love Toronto.
Where millions of people who wouldn’t know a pick-and-roll from a Tootsie Roll are suddenly HUGE basketball fans.

––You're in a whizzing match with a member of the media!––

…You're actually proving my point." https://t.co/Xf4MTKWQHY

On one level, sure, we can debate how worthwhile it is for Mayfield to bother engaging with a troll like Cowherd, but this is a hilarious argument from Cowherd, right out of grade school. “You peed your pants!” “No, I didn’t!” “I made you look! I win!” Cowherd would undoubtedly prefer it if his continuing ridiculous remarks about Mayfield and the Browns went unchallenged, but failing that, he’s going to claim a win just for Mayfield responding to his takes. And that’s pretty silly.

2. Doug Gottlieb calls R.J. Hampton’s decision to sign a deal in New Zealand without telling colleges recruiting him “classless” and “a real DB maneuever”: Gottlieb is known for his bad takes on college basketball, and boy, did he deliver one this week. This time, he bashed 18-year-old R.J. Hampton for signing a deal in New Zealand and not immediately informing the NCAA programs trying to recruit him (none of which he’d signed with) thanks to not being able to share that news officially. Gottlieb has since deleted his tweet on this, but here’s a screengrab via For The Win’s Andy Joseph:

Hampton probably had reasons to not mention it until now, and he didn’t even commit to any particular college; Kansas, Memphis and Texas Tech had all made him offers, but none of those schools could say they were counting on him. But calling that “classless” and a “DB maneuver” (presumably a “douchebag maneuver”) is a hell of a line, especially from someone who wound up charged with felony theft over stealing teammates’ credit cards and gas cards while at Notre Dame, leading to his eventual departure from the school (and after he’d previously faced punishment for plagiarism). Now that’s a DB maneuver.

1. Stephen A. Smith blasts ESPN.com for running a story criticizing Magic Johnson, says “supposedly people have anxiety, I mean, stop the presses!”: It’s been a rough week for Smith, who’s been continually criticizing his own company’s journalism because his buddy Magic Johnson was a target of it. On Tuesday, after ESPN.com ran a heavily-reported piece from Baxter Holmes on the Lakers, featuring plenty of criticisms of Johnson’s interactions with employees (some of which led to them seeking treatment for anxiety) and his management decisions, Smith spent the whole day bashing that story himself before giving Johnson himself an unquestioned forum to bash it in the evening. Here are perhaps the most egregious of Smith’s takes on this, from his radio show (compiled by producer Ryan Cortes), where Smith talks about how unhappy he is that this was reported:

Ladies and gentlemen, The GOAT @stephenasmith went OFF today about Earvin Magic Johnson and the Lakers ? NEW HEAT ? pic.twitter.com/G4ZTdnIjQN

“I’m not happy about it one bit! I got BETTER THINGS to do with my damn time, BETTER THINGS to do! ESPN DOT COM decides to come out with a story ON THE DAY THAT MAGIC AND THE CREW ARE GOING TO BE HERE! Do I like the fact that I have to deal with it today? HELL NO! Go check it out on ESPN dot come. Obviously it’s very, very important, right, I mean, the cover of ESPN dot com, it’s a big deal, huge deal. Go ahead, look at it. ESPN dot com, LET’S MAKE SURE WE MENTION THAT. It’s RIGHT THERE, let’s make sure we mention that, ESPN DOT COM. It’s right there.”

“Go read the story. Supposedly people had anxiety, I mean, STOP THE PRESSES! STOP THE PRESSES! I mean, Magic Johnson was tyrannical as a boss, basically that’s what picture they’re trying to paint. MAGIC JOHNSON, with that smile that y’all see on television, all over, PERMEATING the airwaves, I mean, OH MY GOD, STOP THE PRESSES! MAGIC JOHNSON MIGHT HAVE BEEN A BIT HARDCORE AS A BUSINESSMAN, STOP THE PRESSES! OH MY GOD! WHO’S GOING TO CATCH A HEART ATTACK NEXT? Stop the presses! AND IT’S ACTUALLY NEWS TO Y’ALL THAT THIS MAN CAME IN THERE AND HAD AN ATTITUDE? REALLY? REALLY?”

“He had an attitude. He wasn’t pleasant to work for. That smile wasn’t always there. He was demanding and he wouldn’t tolerate mistakes. OH MY GOD, LET’S GET THE AXE! LET’S TAKE MAGIC JOHNSON TO THE GUILLOTINE! LET’S DO SOMETHING! OH MY GOD! THAT’S AN ISSUE? THE HELL Y’ALL TALKING ABOUT? Are you kidding me? I mean, stop the presses! Magic Johnson, he wasn’t smiling all the time, he was mean, he wasn’t pleasant. I mean, you got some article, some point in the story where they talk about “the anxiety. I had to quit. I couldn’t take it.” AND THAT’S WHY YOU’RE GONE!”

There’s a whole lot going on there, from Smith trivializing the seriousness of the complaints against Johnson and trivializing a serious medical condition to him bashing his own company’s reporting and making it clear he’d rather they didn’t report on his friend. And this was only one of the times he dumped on this report; he did the same thing on First Take.

Yes, @KobeBryant was LIVID his name was even mentioned amid all of this Lakers mess! pic.twitter.com/qpJI8BdR0Q

And on that NBA preview special with Johnson, Smith and Michael Wilbon just sat there and let Johnson give his version of events with next to no pushback:

Magic Johnson addresses alleged abuse in the workplace, Rich Paul on the team plane, Pelinka, and other details from the article todayhttps://t.co/tf4E0yFl5t pic.twitter.com/buhEgxfXCR

It says something about what ESPN prioritizes when they let someone like Smith just spout off takes about this about their own reporting without even really discussing the facts of the story. There’s room for a nuanced discussion of Holmes’ piece and what it does and doesn’t say (for example, Zach Lowe’s conversation with Holmes is a good example of that), but this isn’t it. And Smith’s utter disregard for actual reporting and trivializing of mental health issues is just ridiculous.

But Smith is the highest-paid on-air talent at ESPN, and that shows that they value his hot air and hot takes much more than just about anything else. After all, Holmes was even in the same building as Smith, Wilbon and Johnson during that interview, but instead of putting him on air to defend his reporting and ask Johnson questions (Johnson declined to comment for the piece, only taking to ESPN later in an attempt to rebut it), they chose to go with the Johnson-enabling duo of Smith and Wilbon, and had Holmes just watch it on TV. And that says a whole lot about ESPN, none of it good.

As Dan Patrick said, “You can’t just brush it off because you’re friends with Magic Johnson.” Except some of those on the TV side at ESPN apparently can. At any rate, though, this whole saga should be used as a rebuttal the next time Smith tries to claim he’s a journalist, something he throws out every once in a while when it’s convenient for him. This made him look like much more of a crisis PR manager for his buddy.

Honorable mention: Dan Shaughnessy claims Bill Buckner “never should have been defined by one play,” forgetting that he led the way on defining Buckner by that one play. (Especially in his Curse of the Bambino book, but also in print and on Twitter.)

Bill Buckner never should have been defined by one play https://t.co/H5f9Wq1TfT via @BostonGlobe

Life comes at you fast @Dan_Shaughnessy…
A tale in two acts… pic.twitter.com/aeqSMllw5P