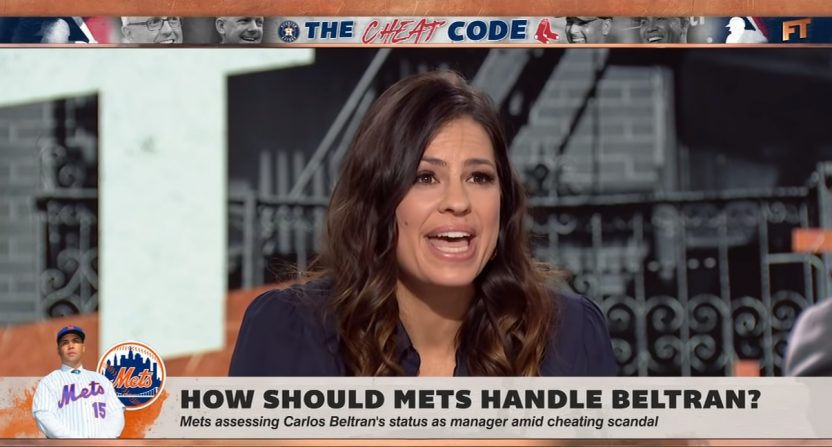 The weird situation of ESPN broadcaster Jessica Mendoza working for the Mets is over.

On Friday, Mets GM Brodie Van Wagenen announced Mendoza “will no longer be a special advisor” with the team while also touting her “expanded role” at ESPN, which does not include Sunday Night Baseball in 2020.

We are happy for Jessica Mendoza who will be expanding her role at ESPN. To focus more on those new responsibilities she will no longer be a Special Advisor to the @Mets. pic.twitter.com/FUyHiPVOMm

Mendoza also signed a new contract with ESPN which moves her from Sunday Night Baseball to “a national package of Major League Baseball game telecasts”. Weirdly, she just got a “multi-year extension” 14 months ago that kept her on Sunday Night Baseball. Huh, I wonder what changed in the last year?

ESPN is (naturally) spinning this as a promotion, even though Mendoza is being taken off of their premier MLB package and has been dumped onto mid-week games, where she’ll presumably replace David Ross (who left ESPN this offseason to take the Cubs’ mangerial job).

I have several thoughts on these dueling announcements.

Whether or not it was their decision, Mendoza’s decision, or a condition of her extension, kudos to the Mets for realizing their continued employment of Mendoza (while she was working for ESPN in such a high profile role) was a farce that made both them and Mendoza look worse. The conflict of interest (which was not dampened by ESPN’s third grade logic of “well, other analysts are doing it, so it’s fine!”) has been apparent since the moment she put both the analyst and advisor hats on and, following her comments about Mike Fiers and the Astros’ sign stealing scandal last month, something had to give before the start of the 2020 MLB season.

Mendoza’s new responsibilities with ESPN aren’t a good thing or a promotion, no matter how ESPN attempts to spin it. Mendoza is being bumped from the one exclusive MLB package ESPN has, down to mid-week, non-exclusive games with (presumably) a rotating set of play by play announcers. She’ll also be shifting her focus for something like four or so weeks of the season to cover the Women’s College World Series and both baseball and softball at the Summer Olympics in Tokyo (which run through the MLB trade deadline, a time of year you’d think a network would want their top MLB analysts in pocket).

ESPN is also trying to tout Mendoza’s importance to the company by throwing her on ESPN Radio coverage of premier events, but in reality, this isn’t much of a promotion. She’ll be on the ESPN Radio coverage of the World Series (presumably bumping Chris Singleton off of the coverage or creating a three-person booth, either of which is a bad idea). However, ESPN is also noting that Mendoza will be on other Postseason radio broadcasts too, which isn’t even a promotion, since she was paired with Jon Sciambi to call both the NLDS and NLCS last year.

ESPN boxed themselves into a corner with Mendoza. If they simply didn’t renew her contract and let her walk, they’d look awful, given how much they beat the “TRAILBLAZER!” drum (which they’re still doing in this release, for whatever that’s worth) during her time on Sunday Night Baseball. If ESPN kept her on Sunday Night Baseball and buried their heads in the sand in the face of rampant criticism (both to the booth as a whole and Mendoza’s conflict of interest/shitty comments about Fiers), they’d look utterly incompetent. If they gave Mendoza a new contract, took her off Sunday Night Baseball, and tried to spin it as a promotion…well, everyone would see through it and call ESPN on their bullshit, and that’s where we are today.

On the bright side, this is one less thing to focus energy on in 2020. The Mendoza situation has been clarified in what is arguably the least messy way possible (though it’s still pretty messy), and we’ll be getting the changes to Sunday Night Baseball that we’ve all been clamoring for over the last two years. Now, if the booth still isn’t good this year, then ESPN will have a major rebuilding task ahead of itself.

Now, we’ll see if TBS, Fox, and MLB Network nudge some of their analysts into leaving their front office jobs with teams – or at least not embarrass themselves when talking about a controversy involving the team that employs them.