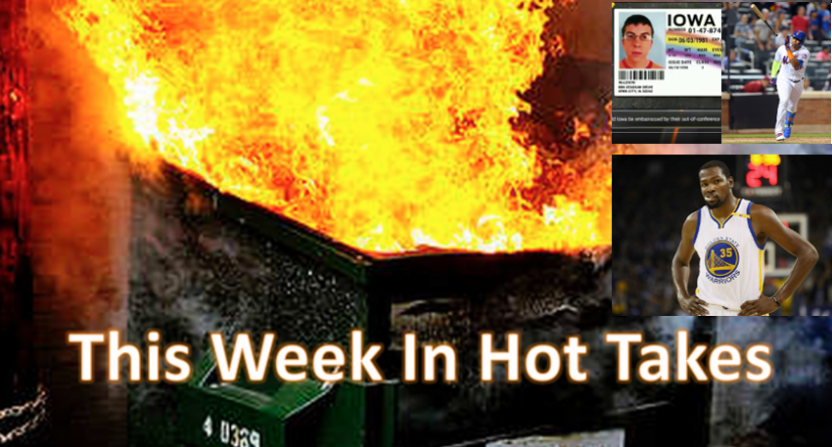 Welcome to another edition of This Week In Hot Takes. Here’s a look at the hottest sports media takes from April 7-13.

5. Don Brennan thinks the Maple Leafs tanked to avoid the Senators: Ottawa Citizen columnist Don Brennan has been known for plenty of hot takes over the years, and there have been numerous hot takes on the subject of teams seemingly trying to arrange particular playoff matchups, so combining the two created some ?. On Sunday, after the NHL’s playoff matchups were determined, Brennan penned a piece immediately recognizable as ludicrous just from its “Fear of facing Senators in playoffs responsible for Maple Leafs choke” headline. But it gets even better:

At approximately 7:45 p.m. Sunday, right around the time an unreasonable facsimile of the Ottawa Senators was leaving the ice after losing to the New York Islanders, the playoff match-ups looked set.

The Maple Leafs were leading the Columbus Blue Jackets 2-0 and the only way Toronto could avoid Ottawa in the first round was by giving up three goals without scoring any more themselves.

This realization must have hit the Maple Leafs when they looked at the out-of-town scoreboard at Air Canada Centre, and clearly it shook them.

So fearful of running into the Senators, the Maple Leafs almost immediately rolled over and played dead. With a 3-2 loss to the Blue Jackets, the Maple Leafs get the opponents they obviously preferred: the Presidents’ Trophy winning Washington Capitals.

Yes, Toronto would obviously rather face a 118-point team than a 103-point one. That makes lots of sense. Brennan goes on to say this is most painful to him and his deadlines, and to blame it for the lack of an interesting series preview in his column:

The turn of events was most disappointing to those of us who, at 7:45 p.m., started previews for another Battle of Ontario.

…You were also going to get an entertaining and extensive breakdown of the two teams. Now, because the Maple Leafs purposely choked, I don’t have enough time before deadline to give you a breakdown on the Senators-Bruins series.

Apparently Brennan never heard of the beat writer trick of having two versions of a story going so you’re covered by deadline regardless of what happens. (Or he has, but just wanted to use this excuse to try and justify a lazy and terrible column.) But yes, I’m sure the Maple Leafs purposefully tanked to avoid those fearsome Senators and instead play the chumps from Washington. And maybe the real motivation was to screw up Don Brennan’s deadline.

“Somebody at this desk is going to have to be objective about LeBron James, and I’m going to be objective!” Skip, you have never once been objective about LeBron. You’ve spent a career bashing him for plenty of dubious reasons, and James’ role in this “collapse” in a regular-season game that didn’t mean a whole lot is just the latest. Bayless also goes on to say James bears responsibility for the late five-second call because he’s “the best passer in the league” (Chris Broussard rightly points out many point guards would disagree) and to complain about his late-game foul. Yes, James had a role in this loss, but the extremes Bayless goes to to denigrate him are a bit much.

Iowa Football: The gift that keeps on giving pic.twitter.com/PW8YMBdEy0

We’ve seen this rant before, with Cowherd yelling about Iowa scheduling FCS power North Dakota State (who wound up beating them) last year. This time around, he’s mad about the Hawkeyes playing Middle Tennessee State, a FBS school from Conference USA. It’s unclear why Cowherd cares so much about Iowa’s football scheduling, why he compares them to Alabama and Texas, and why he thinks BYU is such a marquee opponent these days. But sure, rant away.

2. Phil Mushnick thinks Yoenis Cespedes is a bad player because he doesn’t always hustle to first on easy outs: As per usual, there were a whole slew of contenders from Mushnick this week, including his thoughts on how defensive shifts are evil and players should defeat them by bunting and his complaints about late starts (a recurring theme). However, his hottest takes were about Mets’ outfielder Yoenis Cespedes. Here are the key lines from the first part, Item #1 in this seven-item list from Sunday of how the “Stink of dishonesty spreads far and wide over sports landscape“:

SNY’s Mets crew, which by now must believe we can’t see that Yoenis Cespedes, beyond swinging for home runs, is a $110 million superstar who plays as if he isn’t allowed to get his school clothes dirty.

Last season, Mets SNY announcers — except on one, late-season occasion — ignored, excused or offered weak defenses for why Cespedes doesn’t run to first — a career habit that made him expendable to three teams long before last year’s injury.

This season, starting with his first at-bat, baloney was served. Gary Cohen said Cespedes appears “stronger and faster.” Faster? Cohen has seen him run? Do tell.

In that game, Cespedes twice, with two outs — once with the score 0-0 — hit high flies to deep left-center. Both were caught, but did Cespedes bother to run? Cohen, Ron Darling and Keith Hernandez didn’t say. SNY only showed Cespedes handing his batting gear to first base coach Tom Goodwin. The conditioned suspicion was Cespedes did his standard jog-and-watch.

Hernandez’s claim last season that Cespedes is “the smartest base runner on the team” was preposterous. He may be the worst, most negligent baserunner in the majors.

Cespedes put up 3.2 wins above replacement last year according to FanGraphs, second on the Mets only to Neil Walker. He hit a team-high 31 home runs and got on base at a .354 clip, best of any regular Mets starter. And that 3.2 WAR was a drop-off from the amazing 6.7 he posted the previous year. So he’s an obviously valuable player regardless of he hustles to first or not. But let’s go in more detail and consider Mushnick’s claim that Cespedes “may be the worst, most negligent baserunner in the majors.”

So, even in a down year for him on this front, Cespedes was still scoring at a rate consistent with the team and taking significantly more extra bases than the average Mets player. That’s much more of an endorsement of Hernandez’s claim of Cespedes as “the smartest baserunner on the team” than Mushnick’s claim he’s the worst in MLB. But don’t expect Mushnick to actually do any research, or write anything beyond what his eyes see and his biases suggest. He went back to the bashing-Cespedes well Monday, suggesting that broadcasters are committing a grand coverup by not always showing if Cespedes is trying to run out obvious outs:

I’m not suggesting Vladimir Putin’s involved, but there seems to be a continuing cover-up of Yoenis Cespedes’ continuing disinclination, now at $110 million, to play as if he gives a rat’s quad.

Saturday on SNY, with two out, runner on first, Mets down, 6-1, Cespedes hit a high fly to deep right-center. Nothing left for him to do except run, right?

But the last and only time we saw Cespedes, he was standing watch, before taking two jogging steps toward first.

The ball was caught by Christian Yelich as he smashed into the wall. But where was Cespedes at that point? SNY didn’t show us, Gary Cohen, Ron Darling and Keith Hernandez didn’t say.

On WOR radio, neither Howie Rose nor Josh Lewin told listeners if Cespedes had bothered to run. Rose, however, said Yelich “took an extra-base hit away from Cespedes.” Hmm. How did he know that Cespedes, of all people, wouldn’t have been thrown out at second — or had to stop at first?

There’s something else we can address with data: in addition to those 31 home runs, Cespedes hit 25 doubles last year. That was second on the team behind only Asdrubal Cabrera (30), who had 12 more hits overall. And Cespedes was only put out at second twice on baserunning plays (not counting force plays, pickoffs or caught stealing); the Mets as a whole recorded 18 outs at second on baserunning plays. But sure, Cespedes never stretches a single into a double and regularly gets thrown out at second. Mushnick may enjoy bashing Cespedes, but his arguments don’t hold up.

“I was being nice. I could give it an F, but I won’t go that far. …When Kevin Durant left and I said he ruined the regular season, I absolutely, positively meant it! …Combine that with the rest issue and how that’s tainted the game. …As it pertains to the regular season, there have been far too many negative storylines that have tainted this season for me to give it anything but a ‘D.'”

Smith’s Durant-bashing is well-known, but saying the season was a failure before it started just thanks to Durant’s move to the Warriors? That’s a spicy take, and a pretty silly one.