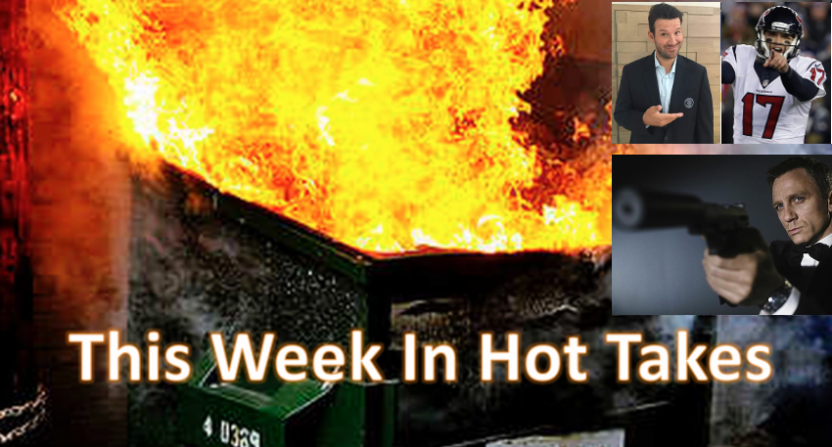 Welcome to another edition of This Week In Hot Takes. Here’s a look at the hottest sports media takes from March 31-April 6.

5. Phil Mushnick thinks late starts prove NCAA “is asleep at the wheel”: UConn coach Geno Auriemma was annoyed with made-for-TV scheduling having the second semifinal of the Women’s Final Four start at 9 p.m. local time in Dallas (10 p.m. Eastern), and everyone’s favorite New York Post “media critic” agrees. Mushnick has complained about games that run past his bedtime for years while ignoring the existence of all time zones other than Eastern, and he did so again in delightful fashion this week, going after the start to that Mississippi State – UConn game in a column headlined “Ridiculous late starts prove NCAA is asleep at the wheel.” Here are the highlights (or lowlights):

Well, throw another extraordinary ending to an extraordinary game on the ol’ Can’t-Miss/Missed-It heap, a growing pile caused by sports’ addiction to TV money.

The historic buzzer-beating OT end to the historic UConn women’s winning streak at 111, was widely lost to at least half the country’s population as it began here Friday at 10 p.m., and ended Saturday morning at 12:16.

Fittingly, it was played on and for ESPN, where significant games played by Eastern Time Zone teams now regularly go to their midnight deaths, surrounded by friends and family — those still awake — but otherwise alone.

To be honest, I saw the end of regulation and OT only because I awoke in time, thus performing a Half-Mike Francesa — honest enough to admit I fell asleep. But that was less a matter of luck than of an aging bladder.

Never mind that UConn-Mississippi State delivered an average of 2,763,000 viewers on ESPN2, plus 20,000 more if you count streaming, making it the most-watched women’s basketball semifinal game since 2013. Mushnick was asleep, so therefore everyone else was asleep. But hey, he can use “historic” twice in seven words, so he’s more qualified to judge than you. (The shot at Francesa falling asleep is pretty funny, though.)

“It is laughable and offensive to me to put Tony Romo in the same sentence as ‘Does he belong in the Hall of Fame’? No, he does not belong! This shouldn’t even be a question! …I’m going to quote my all-time favorite playwright to answer this question, Mr. William Shakespeare if I can, from Macbeth, suffer me this, okay. This sums up Tony Romo’s career, ‘A tale told by an idiot, full of sound and fury, signifying nothing.’ That’s it! That’s what it was. It signified nothing to me!”

Well, at least Bayless is right about the “tale told by an idiot” part. Debating whether Romo’s a Pro Football Hall-of-Famer is absolutely valid, and there’s a case to be made that he’s not, but overlooking all the highs of his career this way is remarkably dumb. It’s also a stance shared by Bayless’ former debate partner, as we’ll see in the next entry.

3. Stephen A. Smith thinks Romo doesn’t deserve attention because of his playoff record: “A man who’s won two playoff games in nine years as the starting quarterback for the Dallas Cowboys, who’s made $128 million over the course of his career, this man is retiring and we’re making a big deal out of it!”

Judging quarterbacks by the team statistic of wins and losses is stupid, but judging them by playoff wins and losses is even more stupid, and it’s particularly so with Romo. There have been multiple strong cases made this week that Romo’s stats (many of which came during years where he didn’t have a lot of help) make him one of the most underrated players ever. But sure, Stephen A., playoff record is all that matters.

2. Tony Grossi bashes analytics, blames Bill Barnwell: Grossi, a ESPN 850 Cleveland personality, has long been known for his hot takes, but this one particularly stands out. In a column that somehow got published on ESPN’s site, Grossi managed to not only go in on analytics, but say they’re “complicating” the Browns’ decision about what to do with the NFL draft’s top pick (shouldn’t a decision of that magnitude involve some thought?), and then blames fellow ESPN writer Bill Barnwell:

Usually, how to maximize the No. 1 pick is the pivotal call of a team in this position. But it has been reduced to almost an afterthought because it most assuredly does not involve a quarterback.

It’s easy, right? Use the No. 1 pick on pass rusher Myles Garrett and then go to work on the tougher challenges.

At least it seemed simple, until Bill Barnwell struck again.

Analytics-R-Us: Barnwell is a staff writer for ESPN.com, steeped in analytics, one of the many speakers at the annual MIT Sloan Sports Analytics Conference, which was held in Boston last month.

After all, Barnwell, who speaks the language of the Browns’ current regime, using terms like Pythagorean triangulation and Defense-adjusted Value Over Average (DVOA) systems, apparently was the one who first conceptualized the idea of the NBA-like, salary-dump trade for Houston Texans quarterback bust Brock Osweiler.

In a Dec. 22 column on ESPN.com, Barnwell proposed the Browns take on Osweiler’s $16 million salary as a means of accelerating their rebuilding project.

If the Browns do not employ Barnwell as a consultant, they certainly read him and respect him. For on March 9, they shocked the sporting world – except for Barnwell – by doing what he recommended 2 ½ months earlier. Well, almost exactly what he recommended.

…It’s not unfair to speculate that the concept originated with Barnwell. Which would mean the Browns are outsourcing major decisions to a football analytics columnist and podcaster with no practical experience in football scouting, coaching or team-building.

First of all, it seems that Grossi means Pythagorean expectation (“Pythagorean triangulation” would be more suited for a high school trigonometry class), but beyond that, his analytics-bashing and Barnwell-bashing here is just hilarious. And “outsourcing major decisions to a football analytics columnist” is something not supported by the evidence. Perhaps the Browns made the Osweiler trade just because it was a good way to use cap space and gain draft picks?

Also, just because Barnwell was smart enough to envision that before it happened (and Grossi wasn’t), that doesn’t mean that the team’s turned over decision-making to him. Grossi then goes on to grossly oversimplify the call the Browns have to make here. Drafting Garrett is far from a sure recipe for success (some highly-drafted pass-rushers have turned out great, but many haven’t), and there are plenty of other plausible options for the team. But sure, it’s just those nasty analytics complicating a call they should make on their gut without any evidence. Good argument.

1. Mike Parry argues “James Bond shouldn’t support Liverpool”: This week’s most delightfully bizarre hot take comes from across the pond, thanks to talkSPORT’s Mike Parry. Daniel Craig is the most recent man to play James Bond, and may be continuing in that role. Craig is also a well-known Liverpool fan. For some reason, Parry seems to think those two things should not go together, going off on an incredible rant about this last Saturday after Craig was seen watching Liverpool at Anfield:

Absolutely disgraceful that James Bond has come out as a Koppite .. 007 belongs to this nation .. not one football club .. any football club

Some of you don't get my point. Ian Fleming created James Bond. He never made him a Liverpool FC fan. Daniel Craig IS currently James Bond

@mikeparry8 So because he's the current James Bond he has to stop supporting the team he's supported all his life ??

.. no, but he has to not go public on it until he's NOT JAmes bond again .. https://t.co/PbiDovtNLT

James Bond is the most glam and cool iconic man in the world and he's brought to reality through the actor who portrays him .. Daniel Craig https://t.co/GMtaxlp1cj

I can’t wait for Parry’s takes on what Sir Ian McKellen is and isn’t allowed to do. “Gandalf never would have eaten a jacket potato!”