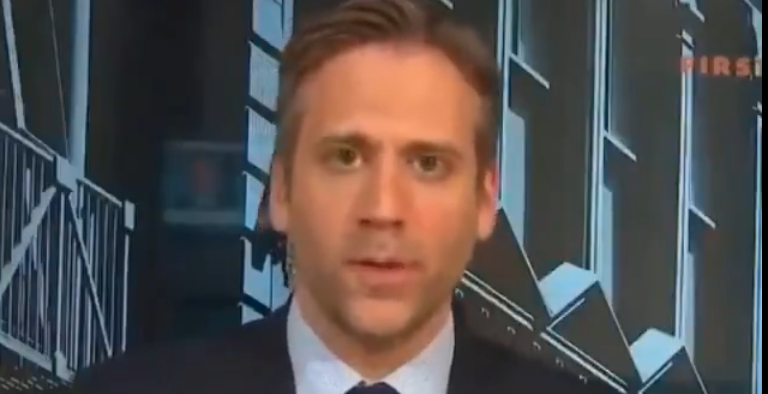 In a fun change of pace, perhaps the silliest comment on ESPN’s First Take this week came not from Stephen A. Smith, but from Max Kellerman. On Wednesday’s First Take, Kellerman decided to blast the NHL as “not a major sports league,” saying “In the United States, no one really cares about hockey.”

Yikes. “nobody really cares about hockey… it’s not one of the 4 major team sports” ???? pic.twitter.com/5rD89ebx8D

And here’s a transcription from Mark J. Burns of Sports Business Journal, who pointed out the irony of an ESPN figure saying this ahead of possible rights negotiations with the NHL:

ESPN's @maxkellerman takes a swipe (jokingly?) at hockey and the NHL on @FirstTake yesterday. Says "It’s not one of the four major team sports."

Plot twist will be when ESPN bids for NHL rights during the upcoming cycle of negotiations. pic.twitter.com/A5o7ohZulm

This also drew backlash from hockey media figures, such as NHL.com’s E.J. Hradek:

This has been going on since the sports radio generation took hold. Many guys – like @maxkellerman – only speak to their supposed strengths. (He said Isaiah was only slightly better than Stockton in dream team discussion ????). Too lazy to put in the time on hockey. Do the work!!! https://t.co/xFh1BN5Q64

And from some of Kellerman’s ESPN colleagues who do care about the NHL, including Linda Cohn:

What do you mean “Nobody cares about hockey”. Very disappointed and surprised you would make a statement like this @maxkellerman. It’s insulting to this great game, those associated with it ,cover it, and to the passionate fan base here in the United States. #NHL https://t.co/mMWYgRj75v

Of course, there’s a long history of ESPN figures saying that audiences don’t care about hockey, especially as a way to defend the limited coverage of the NHL they’ve provided. The most notable case there came in 2012, when then-senior vice president Vince Doria (who retired in 2015) discussed their hockey coverage with Ed Sherman:

Why does ESPN hate hockey?

Doria: We don’t hate hockey. When I worked in Boston (as sports editor of the Boston Globe), I probably went to more Bruins games than Celtics. There’s probably not a better in-the-house sport than hockey. Watching it live. My own personal feeling is that it never transferred well to television. I’m not exactly sure why that is.

Why does hockey get a limited presence on SportsCenter?

Would it be different if you were a rights holder?

Doria: Well, we were at one time. It wasn’t that different. Listen, I guess if we were rights holder, there probably would be a little more attention paid to it. It’s typical that would happen. We might throw it to commentators who were inside the building. Now we’re not inside the building.

Those comments drew a lot of attention at the time, both for Doria’s “doesn’t transfer much to a national discussion” logic and for his saying the quiet part out loud (that ESPN pays more attention editorially to sports where they have live rights). But since then, ESPN has been much more positive on the NHL publicly, with executive vice president (programming and scheduling) Burke Magnus (who’s actually involved in rights negotiations, unlike Doria or Kellerman) telling Ryan Glasspiegel (then of The Big Lead) in 2018 that “it is just a great sport. I personally love it. I think the NHL playoffs and Stanley Cup is one of the great competitive sport properties on television.”

And it’s not just about Magnus’ words. ESPN has taken some steps to improve their hockey coverage since 2012, from bolstering the attention the NHL gets on SportsCenter to televising the World Cup of Hockey in 2016 to going from ignoring the trade deadline to simulcasting some of TSN’s coverage. The 2017 layoffs devastated ESPN.com’s existing hockey coverage, but they’ve brought in some notable NHL writers on board since then, particularly Emily Kaplan and Greg Wyshynski. And ESPN+ has aired a lot of NHL games, including more than 180 in the 2018-19 season. So the comments from the likes of Magnus and John Buccigross have been seen as more than just polite in many corners; they’ve added to the case that ESPN may well try for at least some NHL TV rights (not just ESPN+) after the league’s deal with NBC expires (following the 2020-21 season). That’s an interesting backdrop for one of their most prominent on-air personalities to be saying “No one really cares about hockey.”

Look, of course there’s some merit to Kellerman’s line here. The NHL isn’t in the same stratosphere as the NFL when it comes to U.S. TV ratings, and it’s not up there with the NBA or MLB either. The NHL’s best single-game U.S. TV audience from 2010 to 2019 was 8.723 million average viewers (for Game 7 of the 2019 Blues-Bruins Stanley Cup Final), with the NFL, Olympics, MLB, college football, NBA, college basketball, soccer, and horse racing all posting single events that pulled more than double that audience during that time (and the PGA and NASCAR posting events that almost doubled it).

So while there’s a clear tiering effect amongst those four sports, and while any “the four major professional team sports” discussion needs to bear that in mind, the NHL is the obvious fourth. And it does post significant national TV numbers. (Which is a big part of why it’s trying to hold a postseason despite COVID-19 concerns.) And yes, the NHL gets more attention in Canada (which is why it gets more from its Canadian TV deal than its U.S. one despite Canada’s population being only 11 percent of the U.S. number), but it’s not an irrelevant U.S. TV property, contrary to Kellerman’s claims.

Will Kellerman’s comments actually affect anything? Probably not, although it is fun to envision NBC executives playing this clip during their next rights negotiations with the NHL. Kellerman is a talking head on a hot take show who doesn’t have any actual programming or scheduling power, so a shot from him at hockey doesn’t matter that much. But his comment fits in with a long history of ESPN ignoring or downplaying the NHL, and it illustrates that at least some of ESPN’s studio programming is likely to continue that even if they do have rights. Not being discussed on First Take isn’t the worst thing in the world (it’s notable that Kellerman’s co-host Stephen A. Smith’s previous contributions to the NHL conversation include complaining about ties even after ties were taken out), and First Take is far from an accurate discussion of what’s important in sports (it’s pretty much just NFL and NBA hot takes, and MLB is doing fine despite being largely ignored there), but it’s certainly interesting to see a high-profile ESPN personality blasting hockey on the airwaves again.