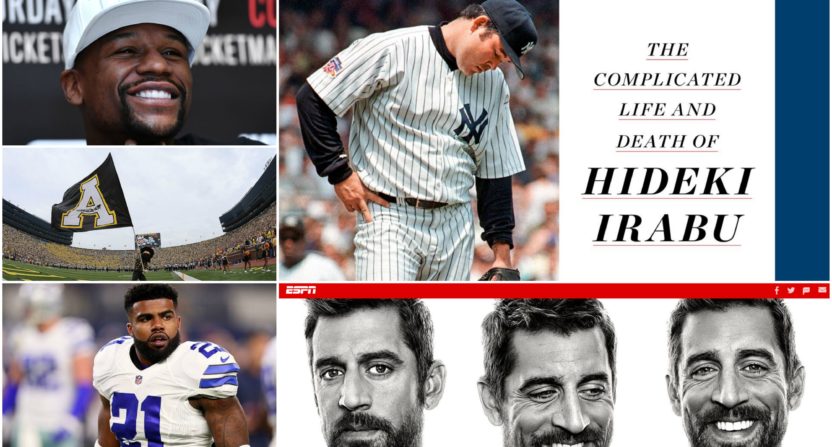 Deadspin senior editor Diana Moskovitz writes good stuff on all kinds of subjects, but she really separates herself with her coverage of violence against women, a subject that often goes under-reported in sports media. Again and again, Moskovitz excels at not only reporting on domestic violence and sexual assault but also synthesizing that reporting into smart, thoughtful commentary.

This summer, Moskovitz has been all over the complex and sometimes-confusing Ezekiel Elliott saga, in which the Cowboys’ running back was accused of abusing his ex-girlfriend, then suspended six games by the NFL amid much he-said, she-said. Moskovitz wrote several sharp, insightful pieces criticizing the league’s repeated mishandling of domestic violence cases and worked with Emma Baccellieri to break down the NFL’s investigative report on the Elliott incident in meticulous detail. She also obtained police reports, 911-call audio and video from another incident involving Elliott, while finding time to cover the NCAA’s empty sexual violence policy, Hugh Freeze’s bizarre firing, McGregor-Mayweather and more.

Moskovitz is an essential read on pretty much whatever subject she chooses to write about.

The NFL set itself up for this; by Diana Moskovitz, Deadspin

“No matter what the NFL does, it devolves into a bunch of dudes arguing about whether or not a woman is a liar. … Because not only is the entire Ezekiel Elliott case devolving into a slut-shaming shit show, but it’s a shit show the NFL set itself up for. NFL brass made this happen, and are so stupid they don’t even realize it.”

Oral histories of the summer

Sept. 1 marked the 10-year anniversary of Appalachian State’s shocking upset over Michigan in Ann Arbor, and the oral historians sure took note. If you want a Michigan-heavy look-back at the upset, check out Snyder’s piece in the Free Press. If you want an App State-focused version of events, try Smith’s recounting on Underdog Dynasty. And if you want a thorough look-back with perspective from both sides, go for Kahn’s Scout piece.

The summer in sportswriting news:

Stories of the summer

Donald Trump is probably the best golfer of any president in U.S. history. He also has enough scandals relating to golf to fill a multi-thousand word article.

How Jerry Jones became God’s gift to sportswriters; by Bryan Curtis, The Ringer

This piece about Jerry Jones’ unique relationship with local and national media doubles as a pretty illuminating profile of the Cowboys’ owner.

Where have all the Deions gone?; by Robert Klemko, The MMQB

Robert Klemko reviews the legend of Deion Sanders, then explores why there hasn’t been a two-sport star since him… and whether one could be around the corner.

The fallout from sportswriting’s filthiest fuck-up; by Jeff Pearlman, Deadspin

One small-town newspaper reporter played a prank on another, no one noticed until it was too late, and we’re still talking about it 20 years later.

Why Floyd Mayweather can still box after beating women; by Soraya McDonald and Lonnae O’Neal, The Undefeated

This piece thoughtfully examines why so many people are willing to excuse Floyd Mayweather’s record of domestic violence, with input from a wide variety of sources.

‘Skunk in the outfield’: How the most epic trick play in history broke baseball; by Sam Miller

This is a delightful story about the craziest baseball trick play you have ever heard of and the odd effect it had on everyone involved in it.

This is a fun look behind the scenes at a group of overgrown children whose YouTube videos you have almost certainly come across.

Hunter Greene is not the LeBron of baseball. He wants to be something more; by Joon Lee, Bleacher Report

I wasn’t sure I needed yet another profile of the most-discussed high school baseball star since Bryce Harper, but this was an engaging and humanizing look inside Hunter Greene’s somewhat surreal life.

ESPN caught up with infamous NBA Draft bust Dark Milicic, who seems awfully content with his life, no matter what American fans think of him.

A team of their own; by Jessica Luther, Bleacher Report

This story draws attention to an essentially invisible constituency in the sports world: girls who just want to play baseball.

The fairy tale and the nightmare; by S.L. Price, Sports Illustrated

Everything about the deadly Chapecoense plane crash is devastating. Price pulls out some harrowing stories, including a widow forced to reckon with the accident while working for the team and a survivor wracked by pain and guilt.

“It’s amazing I haven’t ruined myself,” by Timothy Bella, Esquire

I won’t blame you if at this point you never want to read the name “Curt Schilling” again, but this piece is enjoyable even for a Schilling-hater, with an incredible kicker.

The search for Aaron Rodgers; by Mina Kimes, ESPN

What makes this story so great is how Kimes zeroes in the aspect of Aaron Rodgers she found most interesting and develops a compelling narrative around it. In place of the boilerplate biographical details that come with most profiles are genuine insights into what makes Rodgers tick. It helped that Kimes got some really incredible access—in her own living room.

The death of a teenage quarterback; by Lars Anderson, Bleacher Report

Lars Anderson walks us through the Evan Murray’s final hours, the football game that helped kill him and the tragic aftermath of his death. The subject matter is tough to read, but the writing itself is simple, clear and deeply evocative.

The complicated life and death of Hideki Irabu; by Ben Reiter, Sports Illustrated

Every once in a while, it’s useful to be reminded that when we mock over-priced free agents or underperforming stars, we’re mocking real human beings. You may remember Hideki Irabu as a punch line (or as a “fat pussy toad”), but Ben Reiter shows that he was actually a sensitive, layered, somewhat tortured man with a complex back-story.