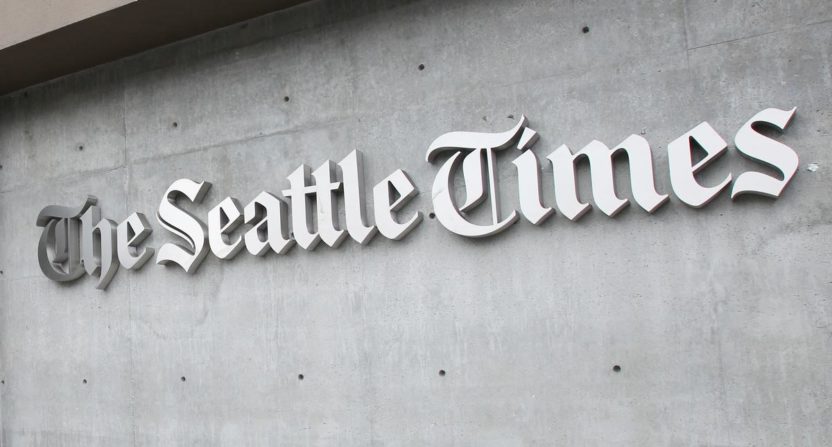 Many newspaper reporters and columnists are regularly guests and sometimes hosts on local radio and television stations, and that’s generally something that works out decently for the newspaper in question. It boosts the profile of their personalities, and can get more people to check out their writing. But The Seattle Times apparently doesn’t want that to happen any more with their writers.

Update: This post initially had the Times banning its writers from all local radio and TV, as that’s what Alex Akita (a former Times employee) of Seattle Sportsnet reported Wednesday. The Times has since pushed back against Akita with a statement saying this ban only involves one local radio station, 950 AM KJR: 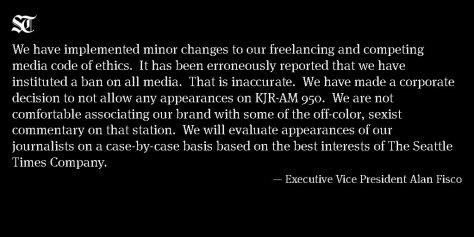 In what is sure to be hailed as a brilliant public relations maneuver by absolutely no one, The Seattle Times has decided to prohibit their entire sports writing staff from appearing on local radio and television for the foreseeable future.

Beginning September 5th, Times sportswriters will be barred from the Seattle airwaves at the behest of management, preventing reporters and columnists from fulfilling previous commitments to local sports radio stations and television outlets. Once imposed, the ban will primarily have an impact on entities like Sports Radio 950 KJR and 710 ESPN Seattle, where many of the Times’ stable of writers would often appear.

Citing “competing forms of media” as the reason behind the embargo, the Times seems willing to sacrifice much-needed exposure for… ego, perhaps? Because make no mistake about it, this decree comes straight from the top and is a direct result of hurt feelings and a bruised manhood.

This doesn’t seem very smart on the part of the Times. Many of their regular reporters and columnists make regular appearances on local radio in particular, and that can be important to establishing them as authorities and getting their voices noticed in a crowded marketplace. There’s a reason this hasn’t really been attempted anywhere else. The Seattle Sportsnet piece initially said this was at the instigation of Times publisher CEO Frank Blethen, and that it’s coming because Blethen has pushed for positive coverage of the city’s KeyArena redevelopment plan and negative coverage of private businessman Chris Hansen’s competing Sodo arena project, which has taken significant flak from personalities on KJR, Q13 Fox, and other local media outlets:

Of late, Blethen has become hyperaware of backlash from the Times’ controversial stance on the Seattle Arena situation. The Times editorial staff, at Blethen’s subtle urging, has published puff piece after puff piece attempting to quash any positive press about Chris Hansen’s Sodo arena project, while simultaneously propping up a competing project on the current site of Seattle Center’s Key Arena. Such a strongly skewed viewpoint has been met by more than a few raised eyebrows and, unsurprisingly, has elicited the attention of the aforementioned “competing forms of media.”

On Sports Radio 950 KJR, primarily, talk show hosts have not withheld their opinions on Blethen or the Times. At the same time, Sports Radio 950 KJR is where many of the Times’ sportswriters have surfaced on recurring, regular segments. …The impending moratorium will silence all of these voices going forward.

And Akita’s update says he still believes this is about the arena:

This is sure to get interesting, as the Times, in their continued effort to save Frank Blethen’s reputation, could be positioning themselves for a potential legal battle with KJR’s parent company, iHeartMedia. By singling out one entity and labeling their commentary as “off-color” and “sexist,” the newspaper could be trending into libelous territory.

Despite what the Times claims in their statement, this was initially billed as an effort to prevent writers from engaging with “competing media.” Again, that was the initial spin. With the story leaking and picking up steam, the Times has now changed their tune. While a vendetta between Frank Blethen and KJR was seemingly understood by those close to the situation, no one would have expected the paper, on Blethen’s behalf, to admit that this is more or less a personal matter.

And if the Times intends to paint KJR with the “off-color” brush, they’ll need to do so with any other competing sports radio station. The content across sports radio stations is, essentially, the same. And there is nothing to suggest that Sports Radio 950 KJR is any different morally or ethically than, say, 710 ESPN Seattle. Perhaps the only key differentiator between the two local stations is the fact that 710’s stance on the arena situation has been much more in line with that of Frank Blethen and the Times editorial board, while 950’s stance has been more contrary. That alone seems to have created this lasting rift.

If there were actually regular off-color or sexist comments, that might be a reason for a ban like this. A full-on ban seems pretty harsh, though; even the Red Sox only offered some mild criticism of WEEI along similar lines (which had some specific data points supporting it, and still turned into a whole thing). And if the sexist comments really are the reason why, the paper should provide a little more evidence about them to strengthen their case that it isn’t about the arena, or about KJR hosts bashing the Times.

Akita isn’t the only one to say this is about criticism of the Times, either. A KJR host (in a tweet that appears to have since been deleted) discussed this on Twitter, and said it was about KJR’s criticism of the Times (which has mostly been about the arena). That tweet was saved in a SportsJournalists.com thread: 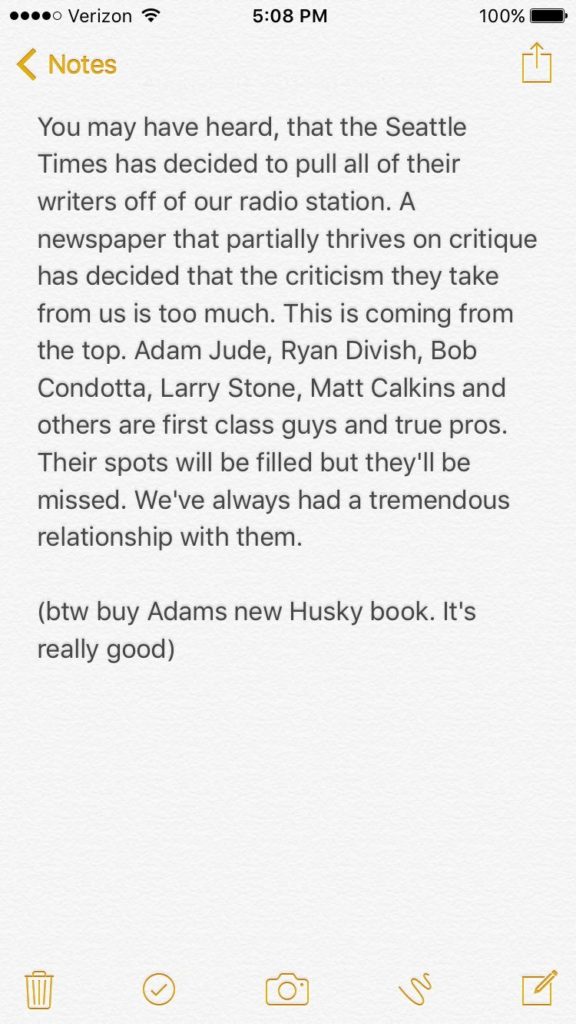 It will be interesting to see if KJR has any response, or if the Times provides any details of why they believe the station is “off-color” and their employees should be banned from appearing on it. If they actually have reason to quibble with KJR over “off-color” remarks, they should detail that. But their statement doesn’t actually refute Avita’s comments about their motivation. It is interesting, though, that they’re not banning Q13 Fox; sports director Aaron Levine has been one of the most critical figures of the Times‘ arena coverage, and has brought Blethen’s name into it at times.

None of this certainly seems like a great reason for a ban, and it wouldn’t seem likely to stifle that criticism. If anything, having Times reporters on KJR probably provides some airtime where the station won’t be criticizing the paper (or at least, where someone who works for the paper can try to rebut criticism). Pulling them off, especially if it’s over something as petty as this, only raises the urge to criticize the paper more and provides more time to do so.

And this move may hurt the paper in other ways, too. Radio appearances are a big part of the job for many reporters and columnists these days, and a key way to boost their profile and potentially land paid part-time or full-time gigs in those media. Unilaterally taking those away may make it harder to attract and retain talent. Of course, that’s if this ban (which hasn’t even officially started yet) holds up following the substantial local and national criticism it’s already receiving, which is only likely to grow. But it’s not a good approach for the Times, and it’s hopefully one that won’t be attempted anywhere else.