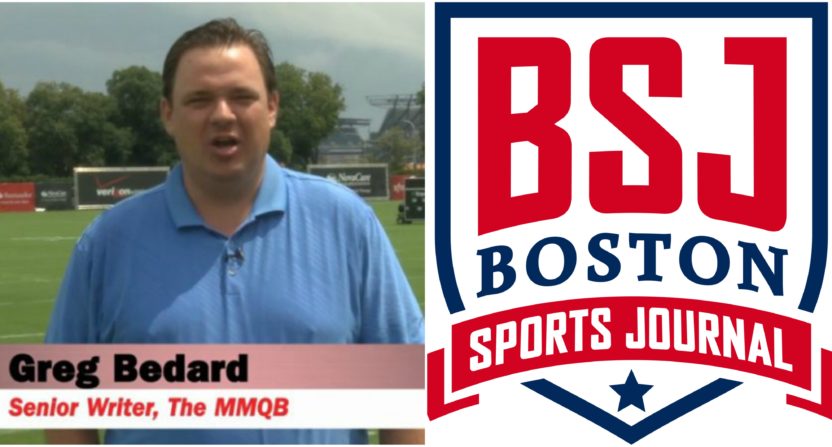 As cuts across digital media raise serious questions about the viability of the free content online, a new subscription model seems to be gaining steam. The Athletic has expanded to Chicago, Toronto, Cleveland, Detroit and the Bay Area. DK Pittsburgh Sports has 40,000 subscribers in the Steel City. And now a new Boston-based venture has sprung up, following the same template.

Boston Sports Journal is the brainchild of NFL writer Greg A. Bedard, who was laid off from Sports Illustrated in March. Bedard has recruited longtime baseball writer Sean McAdam to cover the Red Sox, longtime NFL writer Chris Price to cover the Patriots, and 98.5 The Sports Hub reporter Brian Robb to cover the Celtics, along with a soon-to-be-unveiled Bruins writer. The site will be free next week, then will institute a paywall.

Some more on my announcement. Can't wait to get going https://t.co/85H17YZdWn

In an introductory post published Tuesday, Bedard said the site will grow based on what its readers go for.

In short, the unique part of all of this is you have a hand in everything we do. It’s going to sound cliché, but it’s true: this site will be built on the backs of our subscribers and we will listen. If you want more Patriots coverage and you get your buddies to sign up, we’ll add another reporter down in Foxborough. If Bruins fans love what we’re doing and sign up in droves, we’ll add another reporter there. You are going to be part of the plan and the execution of the site.

Bedard wrote that Boston Sports Journal will be “hyperlocal to Boston and New England,” without “clickbait articles,” “contrived opinions” or discussions of politics. It will have no “clunky” ads or autoplay videos.

Bedard makes no secret of the fact that his site is modeled on DK Pittsburgh Sports, a three-year-old site run by Pittsburgh Tribune-Review alum Dejan Kovacevic.

Dejan Kovacevic started by himself three years ago and now he’s up to nearly 40,000 paid subscribers plus has major sponsorships with Allegheny Health Network and PNC Bank, among others. He’s up to a staff of 11 writers plus others who work on the site. If he can do that in Pittsburgh, why can’t we do that in Boston? Well, we’re going to give it our all to make it happen or die trying.

Bedard’s new site will reportedly use not only Kovacevic’s model but also its technology, having licensed DK Pittsburgh Sports’ web platform and app, according to the Boston Globe.

The success of DK Pittsburgh Sports certainly provides a framework for Boston Sports Journal (as well at The Athletic), though BSJ still faces a climb. Beyond simply producing good content, Bedard has to market his site, massage an audience and make sure all the technical aspects are first-rate. To get consumers to pay for information they can otherwise find for free, you need to be exceptional in all aspects. That means a clean design, high functionality and a smooth user experience. It’s not an easy thing to pull off.

But anyone who cares about sports media—and sportswriting in particular—should be rooting for Boston Sports Journal and all sites like it. If the industry can’t survive by giving away content for free, maybe it’s time everyone goes back to charging for it.