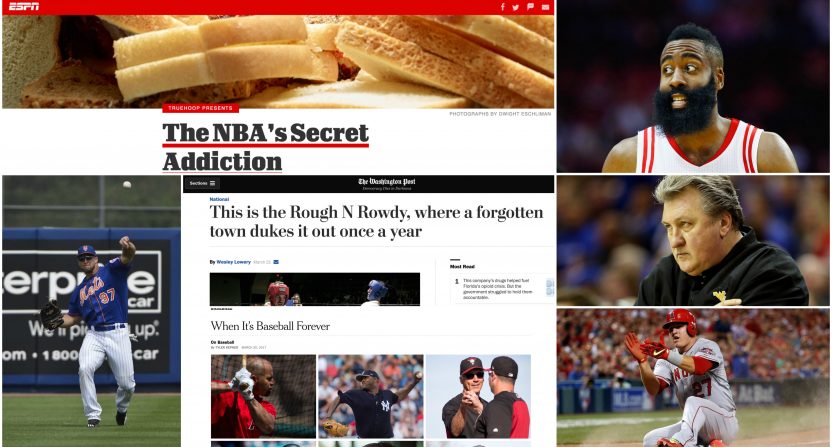 OK, with that out of the way, let’s recap the month in sportswriting. It was a good one.

I know this is cheating, but there wasn’t a single sportswriter who stood out for having an exceptional month in March. The month’s real MVP was the entire NBA team at ESPN, particularly at ESPN, the Magazine.

March began with Ramona Shelburne’s thorough dive into the Buss family, through the eyes of Jeanie. In the middle of the month came Tim Keown’s insightful profile of Russell Westbrook. Later on we got “The Tinderization of today’s NBA” by Tom Haberstroh and “The NBA’s Secret Addiction” by Baxter Holmes, both of which were fun off-beat stories that revealed small but rich parts of the NBA culture.

Those stories, all from one outlet covering one sport, were all among the best sportswriting March had to offer.

Tim Tebow’s throwing mechanics are as bizarre as ever; by David Roth, VICE Sports

The only sensible way to write about Tim Tebow’s baseball career is to mercilessly mock it, as David Roth does here. Because seriously, just look at the photo of Tebow throwing.

The quotes in this piece make Mike Trout seem less like a baseball player and more like Sidd Finch-type mythical being. It turns out Trout isn’t just good as baseball, he’s also good at golf, video games and pranks. Not parking, though.

The gentrification of college hoops; by Tom Farrey, The Undefeated

That rags-to-riches narrative people in basketball love to talk about? Turns out its somewhere between outdated and downright mythical.

Bob Huggins has no plans on changing, whether you like it or not; by Dana O’Neill, ESPN

Even the most curmudgeonly guy has a soft side, and Bob Huggins proves to be a fascinating case study in this profile.

Throwing in the chair: The increasingly bizarre and sad legacy of Bob Knight and Indiana; by L. Jon Wertheim, Indianapolis Monthly

I went into this piece thinking how irrelevant Bob Knight seems in 2017… which turned out to be exactly the point.

A simple and almost poetic ode to baseball, through six men who have been part of the game a long, long time.

The Great Communicator; by Katie Baker, The Ringer

This is a nice profile of Terry Francona, a grizzled baseball man who’s also one of the game’s top innovators.

“You sure you’re ready for this?;” by Eli Saslow, ESPN

Eli Saslow one of the best writers in America, brings to life Yoan Moncada, who is precocious on a baseball field and something else off of it.

How Dodgers GM Farhan Zaidi became one of the most coveted minds in baseball; by Andy McCullough, Los Angeles Times

Out at home, by Bruce Schoenfeld, ESPN

Did you know there are few Dominicans of Haitian descent in American baseball? Did you know that of those few, most don’t publicly admit to having Haitian heritage. Bruce Schoenfeld went to the Dominican Republic to explore why that is.

This is the Rough N Rowdy, where a forgotten town dukes it out every year; by Wesley Lowery, Washington Post

This isn’t a sports story, per se, but there’s a (compellingly unique) sporting event at the center of it.

I now can’t watch a Utah Jazz game without thinking of this article.

How did the Lakers get here? The story inside the Buss drama; by Ramona Shelburne, ESPN

Just a couple weeks after the Lakers massively overhauled their front office, promoting Magic Johnson to team president, Ramona Shelburne had put together this deeply reported piece that doubles as a behind-the-scenes look at Lakerland and a profile of Jeanie Buss.

No NBA player is really an MVP candidate until he’s been profiled by Lee Jenkins. This Kardashian-infused piece on James Harden is crisply written and full of access-fueled insights.

3. Barry Bonds, Pac-Man and the greatest baseball fun fact of all time; by Sam Miller

I promise this is the most fun article you’ll ever read about an inane baseball fact.

2. The voice of the Tar Heels, Woody Durham, lives with a painful silence; by Andrew Carter, News & Observer

This is a three-part masterpiece on the cruel irony of a man known for his voice losing the ability to speak. The broad narrative is irresistible, but this story really shines in its details.

Not every story has to be weighty and serious and important. In this piece, Baxter Holmes turns the most trivial subject matter—NBA players’ favorite pregame snack—into a brilliant must-read. The anecdotes are hilarious, the quotes are delightful and the descriptions of different players’ PB&J preferences are unbelievable. This is a wonderful feature.