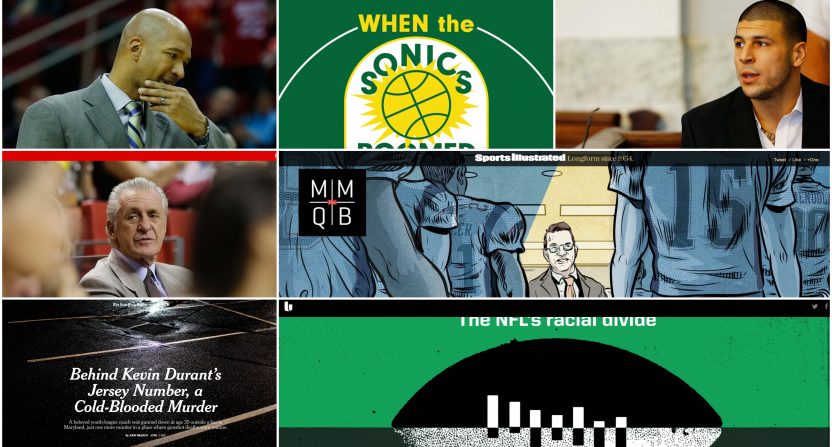 OK, with that out of the way, let’s recap April in sportswriting.

Last Wednesday, Jane McManus was laid off from ESPN, along with dozens of others.

That same day, The Undefeated published a piece she wrote alongside NFL writer Jason Reid, in which they went in depth on why so many NFL positions often seem segregated by race. Two days later, ESPNW published her feature on Ray and Jenay Rice, in which she handled a complicated issue with characteristic grace and humanized the face of domestic violence in the NFL without apologizing for him.

Both pieces were deeply insightful, and both pieces reflect why McManus, like many others who are no longer at ESPN, did not deserve to lose her job.

Wednesday when I got "the call" that was my biggest question. Will the Ray Rice piece run? My Undefeated piece? Once a yes, I had peace.

Q&A of the Month:

D-Wade talks about competing with his friends in who could dress most sharply, about his son’s school play, about his favorite rap lyric mentioning him (it’s, uh, about drugs) and more. This is a lot of fun.

Columns of the Month:

Dan Wetzel covered the Aaron Hernandez saga as well as anyone (and is reportedly now working on a documentary about it). His column after Hernandez killed himself got a lot of attention, but the one he wrote a week earlier after Hernandez’s daughter visited her father’s trial might have been even better. Both are highly worth reading.

Oral Histories of the Month

When the Sonics Boomed; by Jonathan Abrams, Bleacher Report Mag

The 1990s Seattle Supersonics were one of the most exciting and excitable teams in NBA history. There’s also a tantalizing aspect of “what could have been” to their story. This oral history has loads of great details about their abbreviated run.

Shohei Ohtani—Japan’s Babe Ruth—is about to change the face of baseball; by Jon Wertheim, Sports Illustrated

Soon, every baseball fan will know all about Shohei Ohtani. If you currently don’t, let this well-done profile be your introduction.

Wright Thompson has truly never written a bad story. This one is a little slow but just as insightful and beautifully written as ever.

Steve Kerr is one of the most interesting people in sports, and Erik Malinowski does a good job conveying what makes him tick.

The Ghost of the GOAT: Why There Isn’t a ‘Next Michael Jordan’ Anymore; by Howard Beck, Bleacher Report Mag

For years every top perimeter player in the NBA was christened “the next Michael Jordan.” Howard Beck takes a creative look at how that trend has died out and what influence the GOAT still has on the NBA.

This story came out right around when the Times’ public editor was criticizing the sports section for abandoning game stories. Trust me, this piece is better than any game story.

The NFL’s racial divide; by Jane McManus and Jason Reid, The Undefeated

We know all about the dynamics of the black quarterback, but what about the white cornerback? Or the black center? This is a fascinating look at how stereotypes shape NFL rosters.

This is behind-the-scenes reporting at its best, a thorough and revelatory account of how the Raiders ended up in Los Angeles.

If not the player, Ray Rice asks you to forgive the man; by Jane McManus, ESPNW

Before Jane McManus left ESPN, she delivered this thoughtful, nuanced feature on Ray and Jenay Rice, who are trying to move forward nearly three years after Ray’s domestic violence scandal changed their lives.

Friends swore he would be the next Derek Jeter, but Brandon Martin is now charged in three killings; by Nathan Fenno, Los Angeles Times

This is a harrowing and well-told story about a former top baseball prospect’s descent into drugs, mental illness and, allegedly, murder.

Dalvin Cook and the Stories Behind the Red Flags; by Robert Klemko, The MMQB

Around the NFL Draft, we spend a lot of time discussing players with “character concerns” and “red flags” and considerably less time figuring out what those terms actually refer to. This profile of Dalvin Cook goes beyond those trite buzzwords.

Hunter Greene is the star baseball needs. First he has to finish high school; by Lee Jenkins, Sports Illustrated

High school baseball phenom Hunter Greene’s persona and backstory are so compelling that almost anyone could bring them to life. But not just anyone (maybe no one) could do so as well as Lee Jenkins, who tugs all the right strings to make this piece not just interesting but also affecting and memorable.

This piece will grab your attention and hold onto it all the way through, in the way the best crime procedural stories do. It’s so good you’ll forget that it’s all about a lost football jersey.

‘You Can’t Give In’: Monty Williams on Life After Tragedy; by Chris Ballard, Sports Illustrated

This is another gem from Chris Ballard, one of the best magazine writers in the country. It’s a heart-wrenching story about a man, NBA coach Monty Williams, who is trying to put his life back together after his wife’s death. A terrible story, powerfully told.