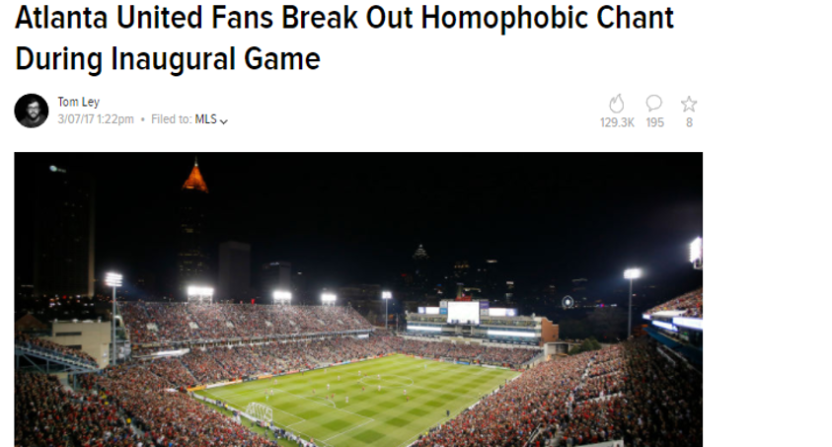 There’s another lawsuit against Deadspin’s parent company (Gizmodo Media Group, part of Univision following their 2016 purchase of Gawker Media Group in bankruptcy court), and this one comes from an Atlanta United fan. We previously saw Univision delete six Gawker Media posts that were the subject of active litigation in September following their acquisition of the company, including three from Deadspin, and another suit against Deadspin was filed in June (by Pregame.com’s RJ Bell, with Hulk Hogan lawyer Charles Harder representing him). Now, The Atlanta Journal-Constitution‘s Doug Roberson writes that Atlanta United fan Kevin Cheek is suing Gizmodo Media Group for libel after Deadspin published a story featuring an unrelated photo of him:

The lawsuit is the result of the website publishing a story with the headline “Atlanta United Fans Break Into Homophobic Chant During Inaugural Game” and was accompanied by a file photo that featured Cheek but was not taken at the game. Gizmodo is owned by Univision Communications.

In the lawsuit, Cheek alleges that his reputation has been damaged and that he has been ridiculed.

The only information available in the court record so far is that Cheek is represented by attorney Albert M. Daykin of Roswell, GA, and that he has paid the $215 filing fee. Here’s the story, from Deadspin’s Tom Ley on March 7, which is actually titled “Atlanta United Fans Break Out Homophobic Chant During Inaugural Game.” That post now features a generic AP photo of Atlanta’s stadium, without any identifiable fans. The AJC’s report makes it seem like it previously used a photo featuring Cheek, though. Here’s the relevant part of Ley’s story:

Atlanta’s new MLS team made its debut on Sunday, losing to the New York Red Bulls 2-1 in front of 55,000 new fans. Some fans cheered the team on and enjoyed themselves, some fans continued to engage in embarrassing “football” cosplay, and some fans got homophobic.

Throughout the game, fans in the stadium broke out the “Puto!” chant, an infamous and ubiquitous Mexican soccer chant that involves fans shouting a gay slur in unison as the opposing goalkeeper takes goal kicks.

There’s no direct mention of Cheek there, and it seems unlikely he was even tagged by name in the photograph, so this would seemingly be a stiff challenge for him. It’s worth noting that the Hogan verdict that killed Gawker wasn’t about libel, but rather invasion of privacy, and that U.S. libel laws are generally not plaintiff-friendly (compared to other jurisdictions). However, they do vary by state, and Cheek may have the advantage of not being a public official (so the “actual malice” standard of the 1964 Supreme Court NY Times v. Sullivan decision may not apply); there also have been some libel awards over photo choices in the past. There’s no word yet on if Harder (who not only represented Hogan and is representing Bell, but also has represented many others suing Gawker and its titles) is involved, or if there’s any connection to Peter Thiel (who funded Hogan’s lawsuit, and some of the other ones against Gawker). We’ll see how this plays out.