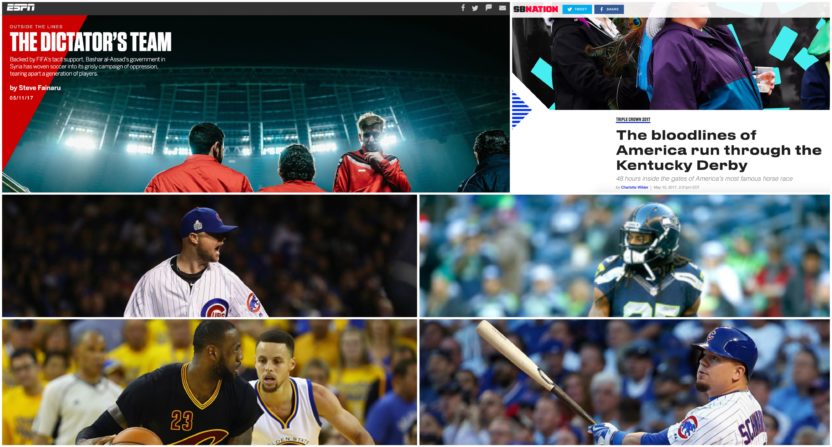 Here at Awful Announcing, and across the sports media world, we spent a lot of time talking about TV. And while TV is a fun and dynamic medium (and, more importantly, pays the bills) we sometimes forget the less-heralded heroes of sports media: the writers. So with that in mind, we launched a feature in which we recap the highlights of the past month in of sportswriting, including some recommendations for stories you may have missed.

OK, with that out of the way, let’s recap May in sportswriting.

Sportswriters of the Month: The Sports Illustrated MLB team

Maybe giving this (highly prestigious) award to a group instead of an individual is a cop-out, but Sports Illustrated’s baseball-writing operation deserves it.

In May, SI published an almost overwhelming amount of great MLB content. There was Ben Reiter’s surprisingly tender profile of Kyle Schwarber and the scout who helped drafted him. There was Stephanie Apstein’s entertaining and creative look at Jon Lester’s yips problem, as well as her breezy profile of Aaron Judge. And there was Tom Verducci’s insightful cover story on the proliferation of the curveball in Major League Baseball. That’s a whole lot of good writing about one sport in one month from one publication.

Column of the Month: PITCHf/ox; by Meg Rowley, Baseball Prospectus

Fox’s Pitch wasn’t the greatest television show in the world, but it meant a lot to baseball fans—especially, as Meg Rowley writes, female baseball fans who enjoyed seeing a woman at the center of a smart and nuanced story about the game they love.

This column explains the importance of Pitch in a way that’s both emotional and levelheaded. It’s less a reflection on a canceled TV show and more a treatise on the importance of representation, complete with references to Michel Foucault and Hanna Pitkin.

Rowley’s piece is a great read, even for people who never watched a moment of Pitch.

Blog post of the Month: The Boston Celtics have a moral obligation to get the fuck out; by Albert Burneko, Deadspin

Righteous fury is fun when it’s directed toward a cause we can all get behind:

All of this is to say, it has been a shitty go-round for the NBA. This season has sucked! Unless the Finals deliver something truly special, it will have been one of the shittier seasons in memory, just a great big ol’ null in the history of the sport. And in order for the Finals to rescue us from this dismal trajectory, the Boston Celtics will have to get the fuck out of my fucking face already.

Stories of the Month:

Many writers have profiled Mike Trout, juxtaposing his incredible on-field ability with his average-guy off-field normalcy, but no one has done so better than Tyler Kepner here.

This story offers a cool history lesson on the last time Cleveland sports were good. The accompanying murder-mystery intrigue gives the piece some life.

You may or may not have noticed the influx of basketball players from the Sudan via Australia, but this piece powerfully explains the fascinating pipeline.

Cavs-Warriors III and the allure of a sports trilogy; by Justin Tinsley, The Undefeated

This piece spins an NBA Finals preview into a full-on history of sports trilogies, complete with a fascinating Ali-Frazier recap and a rundown of every three-match (can we say that?) in modern sports history.

No sportswriter can flip the switch from literary to analytical mid-story quite like Tom Verducci. You’re not going to find a trend piece much better written, better researched and better reported than this one.

Jon Lester didn’t just beat the yips, he improved once the secret was out; by Stepanie Apstein, Sports Illustrated

Jon Lester did not agree to share the secrets of is yips, but Stephanie Apstein discovered them anyway. A cool piece about Lester and the eternally mysterious syndrome he suffers from.

Rarely can a reporter pull off an honest behind-the-scenes glimpse at a team’s culture—warts and all—but Seth Wickersham seems to have done so here.

This isn’t just a well-done profile of Cubs outfielder Kyle Schwarber. It’s also the story of a touching scout-player relationship—with a sad twist at the end.

How Lonzo and LaVar Ball figured out how to get – and keep – our attention; by Ramona Shelburne, ESPN

I know, I know. LaVar Ball is way over-exposed and you’d rather read about toenail clippings than about him. And yet… this piece is pretty great.

Jeff Pearlman describes Tupac’s run-in with a high school football team at an In-N-Out, only hours before he was murdered. The big question here is, how the hell did he find this story, more than two decades later?

The bloodlines of America run through the Kentucky Derby; by Charlotte Wilder, SB Nation

This piece, in which a Northeasterner parachutes into Louisville for the Kentucky Derby, could have so, so easily been tacky or condescending. Instead it’s a thoughtful and incisive commentary on class in America, told through the many gates of Churchill Downs.

This is a deep and hard-hitting piece about how the Syrian national soccer team has come to symbolize Bashar Al-Assad’s tyrannical regime and the dilemma faced by the nation’s soccer players. There aren’t many sports stories like this.