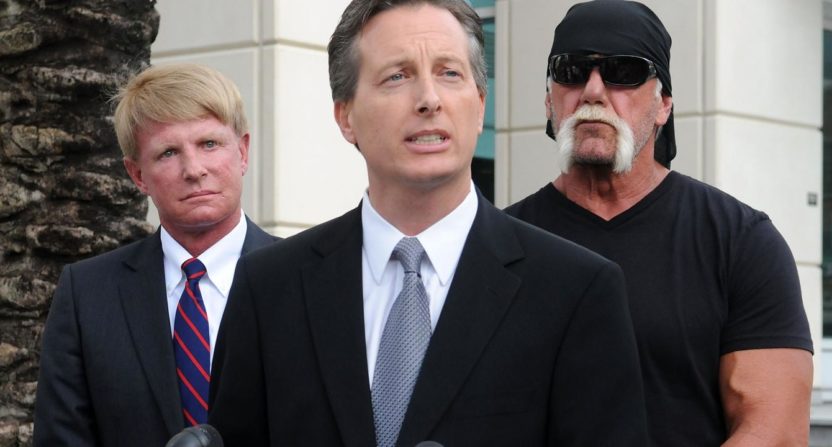 With Deadspin under threat from a defamation lawsuit, parent company Univision is not laying down.

As we reported in June, Deadspin is being sued by R.J. Bell of gambling website Pregame.com, who claims he was defamed in an exposé about his site’s alleged murky relationship with sportsbooks. Bell, who is seeking more than $10 million, has hired Charles Harder, the same lawyer who helped bring down Gawker Media through the Peter Thiel-funded Hulk Hogan lawsuit.

“This meritless lawsuit should not have been brought in the first place and it is nothing more than an attempt to intimidate journalists,” Gizmodo Media Group spokesman David Ford said in an email. Mr. Goldberg said in a statement that his article was the result of a monthslong investigation and that allowing the lawsuit to proceed “will  chill my work and threaten investigative reporting by freelance journalists across the country.”

Harder, in response, told the Journal that, “The purpose of the suit is not to intimidate or harass, but rather to obtain a retraction of the false statements said about my client in the article at issue, and obtain damages for the harm that it has caused.”

It feels important that Univision and Gizmodo are not only defending the merits of this specific story but also speaking so unambiguously about the broader threat to journalism here. Hogan’s lawsuit, which bankrupt Gawker and forced its sale to Univision, seemed to demonstrate that a grumpy billionaire with a well-paid legal team can exact vengeance on a media outlet it doesn’t approve of. Now Bell’s lawsuit feels like a heat check. Harder has succeeded once in silencing reporters who piss off his clients, and now he’s giving it another try, to see just how far the courts will let him go.

Univision and Gizmodo will likely argue that because Goldberg’s story was published before Univision purchased Gawker, the new owner can’t be held accountable, given that Gawker’s bankruptcy plan included a liability release. That alone may be enough to get the lawsuit dismissed. But in their public comments, Deadspin’s parent companies seem to be reaching beyond legalities to make an important moral argument about the danger of intimidation tactics and the harm caused by reporters worrying about legal retribution whenever they hold someone to task.

Per the Journal, a hearing in bankruptcy court is scheduled for Sept. 28.