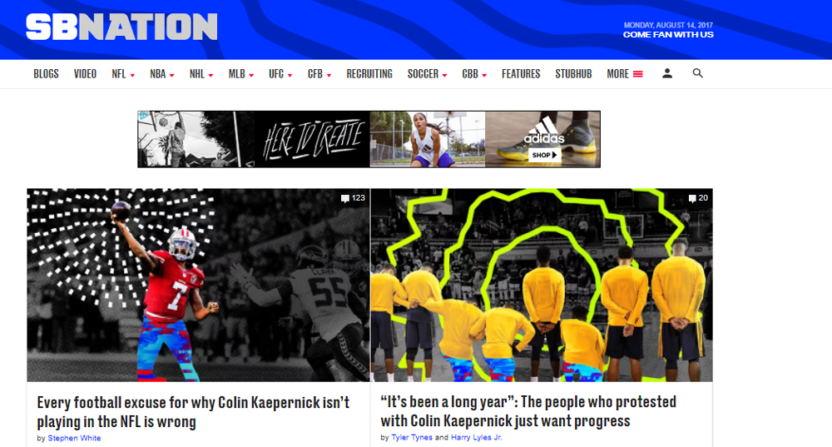 “It’s our company policy that everybody who contributes for a Vox Media property gets paid.” That quote from SB Nation editor-in-chief Elena Bergeron is part of a long feature by Laura Wagner at Deadspin, titled “How SB Nation Profits Off An Army Of Exploited Workers,” and current and former SB Nation site managers have disputed it intensely, both inside and outside of Wagner’s piece. Here’s what Wagner writes about her follow-up question to that:

After Bergeron insisted that everyone who contributes to the team sites gets paid, I told her that the site managers I had spoken to were all explicitly clear that not all of their staff were getting checks from Vox Media. She said, “It sounds like a personnel issue, that we have to make sure that everybody is in accordance with company policy.”

When I pressed this point again, asking about how site managers have a say in how their stipend is spent, Lockland chimed in.

Awful Announcing has obtained a SB Nation lead blogger contract for a team site from 2014, which outlines expected responsibilities (at least 12 posts per week, plus further specific posts around games). For compensation, it includes “Vox Media will pay Blogger a stipend of Four Hundred Dollars ($400) per month, payable on a monthly basis.” Other contributors are mentioned in other parts of the contract, such as “this Service may be conducted by Blogger or Blogger’s designee” for many of the specified posts, and it includes “As Lead Blogger, Blogger shall offer guidance, insight and mentoring to contributors. Blogger shall also provide assignments to contributors, and ensure assignments are completed properly.” However, there’s no mention of a policy or ability to pay contributors.

Wagner’s piece also includes quotes from four current site managers refuting the idea that all contributors are paid, and stating that league managers are aware there are plenty of unpaid contributors (and not just for the user-submitted fanposts, but for assigned and edited and scheduled posts). Here are the key quotes there:

[One manager said] I would guess that 50 percent of our content comes from folks not getting anything. [Our league manager] knows that — we talked about how to use unpaid writers … and I would be shocked if his bosses didn’t know that. And [Lockland’s answer] seems like an attempt to blur the lines between fanposts, which are written and posted by fans with no oversight/editing by us (and thus are the way that most of the big screw-ups of the past have happened), and actual unpaid contributors, who write articles on a normal schedule that are edited and posted in the main layout. Again, they have to know the difference between those roles, so I’m not sure if they’re confused or trying to deliberately obfuscate the issue.

…Another site manager said “I’m under no instruction to pay every single person who writes for me.”

“Every single SB Nation site had paid and unpaid contributors,” he said. “[The idea that everyone is paid] is flatly false.”

SB Nation proudly runs over 300 sports communities. We pay at least one person to manage each of these communities. Each manager is either a full time employee, a part time employee or a paid freelance contributor. Compensation varies based on several factors including the size of the audience and fulfilling an agreed-upon set of responsibilities such as creating posts for the site and moderating contributions of the audience. In addition to monetary compensation, Vox Media supports the communities with full, free access to our publishing platform, tools, hosting and editorial resources such as licensed photos and sports data.

We value the contributions of all of our employees and contractors, and want them to get fair value from working with us: they participate in publishing to our sites and moderating our communities; and we provide compensation and a robust outlet and resources for sharing their passion for a sport, team or community.

There are plenty of possible angles to discussion of SB Nation’s payment policies, from if the per-month stipends to lead bloggers are sufficient for what they’re being asked to do (Wagner’s piece includes some conversations with employment law experts about if these bloggers might be considered employees) to what levels of revenue the team sites are bringing in (which is hard to track, considering how SBNation.com’s traffic rollup includes the homepage, the team sites, and traffic from fellow Vox properties Eater, Racked and Curbed). Some current SB Nation employees or former employees who used SB Nation as a springboard to other jobs praised the company and the opportunities it helped them achieve in Wagner’s piece, but some of them also raised questions about the low pay and the unpaid contributors. And several former SB Nation writers and site managers took to Twitter to comment on their experience there:

Lots of cognitive dissonance reading this. I don’t have my job without SBN, but I also only got paid $100/month for 3,000 words/week at OTM. https://t.co/BHNHXQAMlJ

Here's the thing about SB Nation: I enjoyed (most) of my time there, and I'm glad I had the opportunity at a time I otherwise wouldn't have

While knowing that not a single person, especially not me, at the site would see a dime of the revenue that was generated. Not being paid

I made $10 per hour (eventually raised to $13) working 40 hour weeks. I asked for those hours but wasn’t told I should be getting benefits.

There isn’t necessarily a legal obligation for SB Nation to pay every contributor; writing can be provided to an outlet for free if the author chooses to do that, and there can sometimes be benefits from exposure, including pathways to other jobs. (On that note, though, it’s interesting that the contract Awful Announcing obtained included a non-compete clause preventing the blogger from working for Bleacher Report or ESPN during the contract or for six months after the contract, which would certainly limit some of those pathways.) And not every contributor is looking to become a full-time sportswriter; for some, it’s an off-work hobby, and if their compensation or lack thereof for their writing works for them, great. (It should be noted that expecting people to work for free or limited money, even as a stepping stone to a living wage, limits the pool of writers you get, though.)

But whether SB Nation should pay every contributor to their team sites and/or should pay site managers more is a valid debate. That’s  especially true when you consider that parent corporation Vox Media is valued at over a billion dollars. If content on the team sites is contributing significantly more to SB Nation’s revenue and valuation than what they’re paying for it, that’s definitely grounds for criticism. And there could be benefits to the company to paying more as well; compensation that enables site managers to make that their full-time job could boost the quality of writing and editing on the site and help avoid issues like plagiarism and offensive content, and compensation for contributors could boost the quality of contributors SB Nation receives.

The “write for exposure” versus “pay all your writers a living wage” argument certainly isn’t unique to SB Nation, though, as it’s one that’s ongoing across a wide range of media properties.  What is unique to SB Nation are Bergeron’s comments that “everybody who contributes for a Vox Media property gets paid.” That doesn’t seem to be the case at present, based on comments both inside and outside of Wagner’s article. And it’s quite different than the eventual comment in SB Nation’s statement that they pay at least one person per site. We’ll see what happens here.