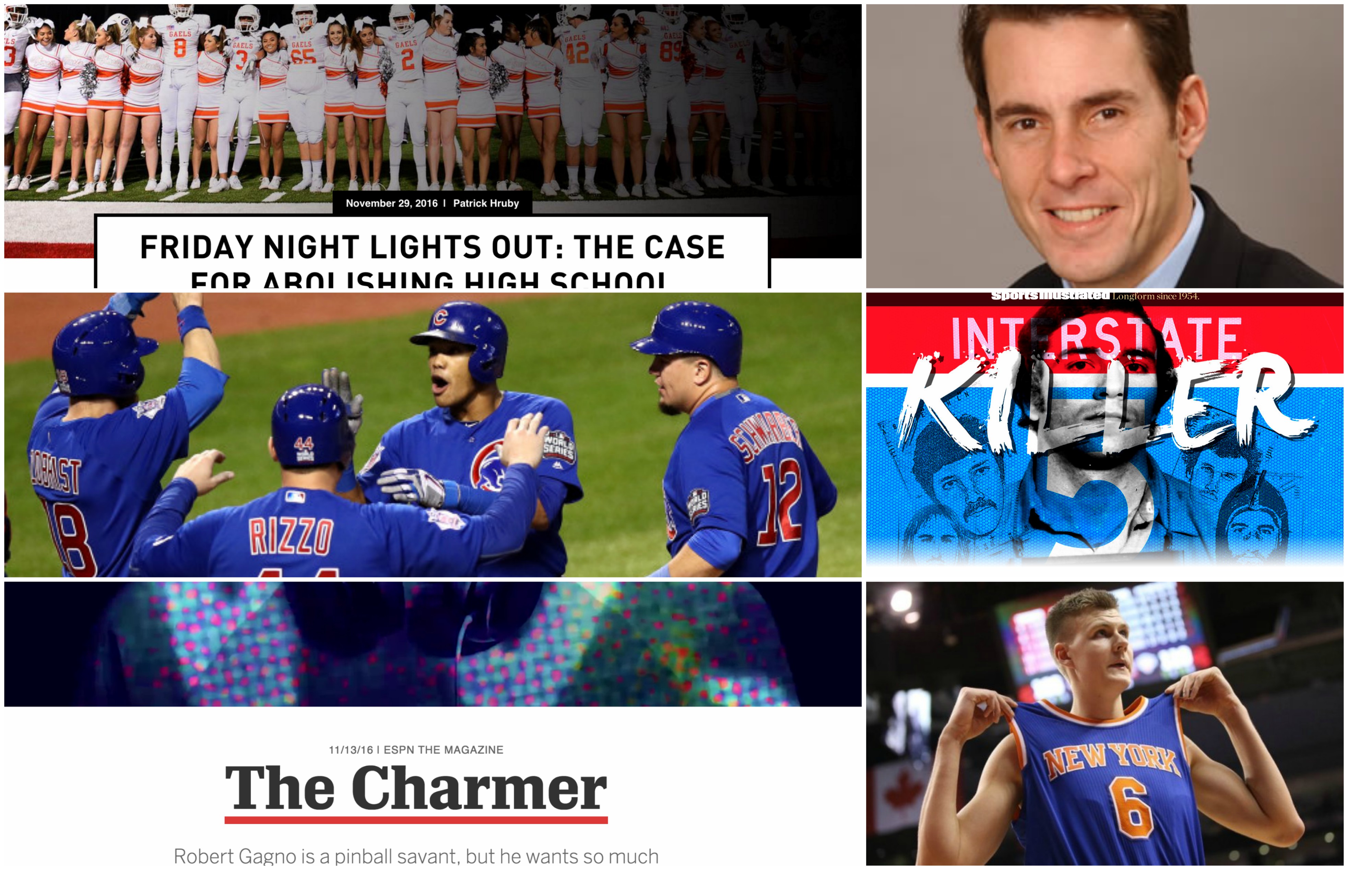 Here at Awful Announcing, and across the sports media world, we spent a lot of time talking about TV. And while TV is a fun and dynamic medium (and, more importantly, pays the bills) we sometimes forget the less-heralded heroes of sports media: the writers. So with that in mind, I’m launching what I hope will be a regular feature, in which I recap the highlights of the past month in of sportswriting, including some recommendations for stories you may have missed.

While October featured a thrilling baseball postseason to report on and ocean of NBA preview material, November was dominated by news that, well, didn’t have a lot to do with sports. Still there was loads of awesome work published over these 30 days, and this list covers a diverse and eclectic range of topics (though, admittedly, not a particularly diverse cast of writers, something to work on for next month).

If you’re interested in finding the best writing on a week-to-week basis, stop what you’re doing and subscribe to the Sunday Long Read, a newsletter compiled by Don Van Natta and Jacob Feldman. I also get great recommendations from Jared Diamond and Mike Vorkunov’s weekly newsletter and from Richard Deitsch’s weekly column on SI.com.

OK, with that out of the way, let’s recap the month in sportswriting.

The two-time defending Sportswriter of the Year lived up to that billing in November, owning the story of the Cubs’ first World Series title in 108 years. Verducci submitted what was, for my money, the best post-Game-7 piece out there, despite (or maybe because of) the fact that he spent the game reporting from the sidelines for FOX.

Then, for good measure, Verducci followed up several weeks later with another Cubs story, this one about the afterglow of the team’s title. This story was at least as good as the other and proved that Verducci is the only sportswriter working who can use the word “somnolent” in his lede without sounding pretentious.

Verducci is writing a book about the Theo Epstein-era Cubs, to be published this spring, so we’ll soon see a lot more of his scholarly literary references and behind-the-scenes vignettes. I, for one, am quite excited. 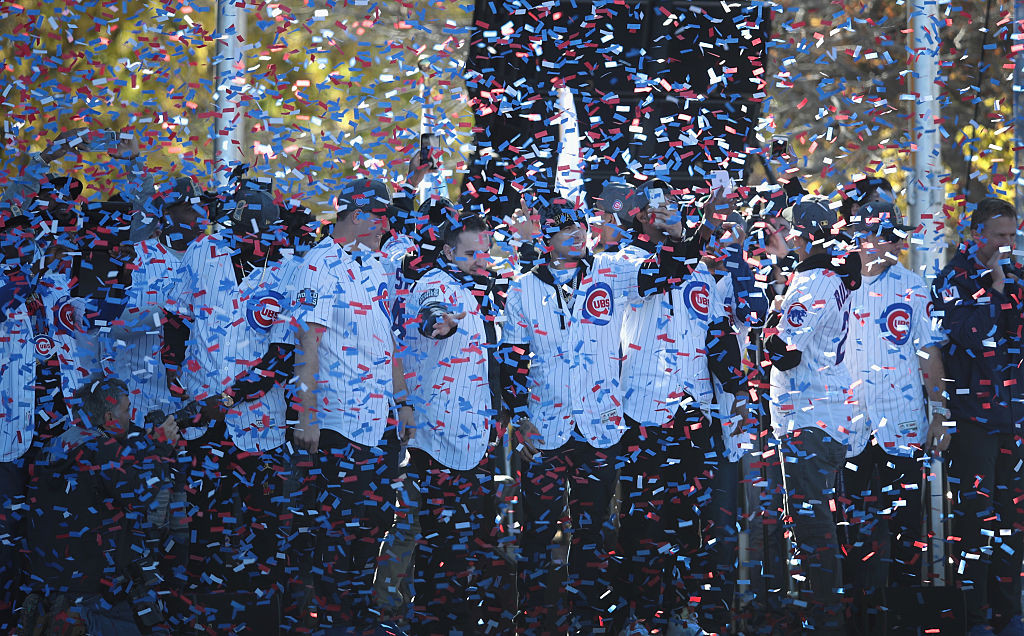 Tim Brown is a must-read at any event he attends, and his Game 7 story, published at 4:37 a.m. (yeah, I’m using on-deadline liberally here) did not disappoint. He focused not on the 107 years of losing that preceded the Cubs’ triumph but instead on the 25 players who made it a reality, providing a welcome respite from the mass rush to contextualize Game 7 within baseball history.

The world had tried for those seven months, during their summer, and especially in their fall, to make these Cubs about the past 107 years of Cubs. Just as last year’s Cubs were about the previous 106. You can keep counting backward with the seasons. It is the burden of being a Cub, one’s signature on the bottom of the contract brings a steady paycheck along with the responsibility for what came before. The burden was unfair. Of course it was. The Cubs always had the better stories. The latest would be about the baseball, however, because they made it so. These 25 or so, they managed to play for the man beside them, not all of the men behind them.

There was a ton of great writing published the night the Cubs’ became World Series champs, but Brown’s piece, by gently understating the moment, captured it better than anyone else.

The headline here is 90 percent of the joke, but it cracked me up anyway. Imagine having Josh McCown on your fantasy team.

– Mark Cuban revoked credentials from two ESPN.com writers, apparently to send some sort of message about the automation of news. The situation ended with ESPN agreeing to link to the Mavericks’ official website.

– Bill Simmons’ The Ringer has not had totally smooth sailing.

– USA Today staffers have been asked to stick to sports.

– Time Inc., owner of Sports Illustrated, among other magazines, could soon be for sale.

– A Baylor associate athletic director was arrested for allegedly assaulting a sportswriter.

The incredible tale of Mark Cuban, Chandler Parsons and the friendship that threatened the Mavericks, by Tim McMahon, ESPN
This piece, about an NBA bromance gone wrong, sounds like it could be a gossip-column item. Instead it’s a fascinating behind-the-scenes look at a unique owner-player relationship.

Honest to Godzingis, by Katie Baker, The Ringer
Not every great profile is an access-fueled epic. Sometimes a punchy essay full of gifs and Vines is just as good, as is the case in this paean to a certain Latvian center.

Football in the Land of Bridges and Walls, by Tim Rohan, The MMQB
Thoroughly reported and eloquently told, this is a sports story with true real-world implications.

Friday Night Lights Out: The case for abolishing high school football, by Patrick Hruby, Vice Sports
This piece asks a very provocative question and delivers the research and reporting to answer it.

The President, the King — and a country in transition, by Justin Tinsley, The Undefeated
Also written in the aftermath of the election, this piece conveys the awkward mixed emotions of LeBron James visiting the White House only hours before Donald Trump.

I postponed open-heart surgery for the Cubs, by Wayne Drehs, ESPN
As cited above, Drehs scheduled his life-or-death surgery around the World Series. His resulting essay conveys just how much the Cubs mean to their fans.

In Chicago, the final wait for a Cubs win mixes joy with sorry, by Wright Thompson, ESPN
Speaking of how much the Cubs mean to their fans, the always-incredible Thompson conveys the team’s title through the dreams of the deceased.

Reign Men: The storm, the speech and the inside story of the Cubs’ Game 7 triumph, by Tom Verducci, Sports Illustrated
As aforementioned, Verducci took us behind the scenes of the Cubs’ victory with insightful anecdotes and beautiful writing. He’s the best baseball writer of this century for a reason.

3. The senior running back: At 55 years old, Joe Thomas Sr. is trying to make college football history, by David Gardner, Campus Rush
In many ways Joe Thomas Sr. seems like the perfect subject, forthright enough grant loads of access but veiled enough to leave the writer with some enigmas to unwind. The best part of this profile was the slow but steady insight into Thomas’ psyche and his motivation for playing—or at least trying to play—college football at age 55.

3. The 1-5 Killer, by L. Jon Wertheim, Sports Illustrated
This piece is no murder mystery—before the story even begins we know that Randall Woodfield is the I-5 killer—but there’s a certain riddle in how a Green Bay Packers draft pick became a serial killer. And while we never get a perfectly clear explanation for Woodfield’s descent in this deeply reported piece, we do get a step-by-step narrative that’s compelling from start to finish.

1. The Charmer, by Chris Koentges, ESPN
The coolest stories often take subjects you’d never expect to care about and turn them into things you care deeply about. This piece introduces us to pinball star Robert Gagno, whose success in arcade games and difficulty in social situations are two sides of the same pinball flipper. The story is engaging, insightful and poignant, teaching the reader as much about the autistic brain as about pinball. By its end, you feel invested in Gagno, both as a pinball player and a person, which is about as much as you can ask for from any piece of writing.