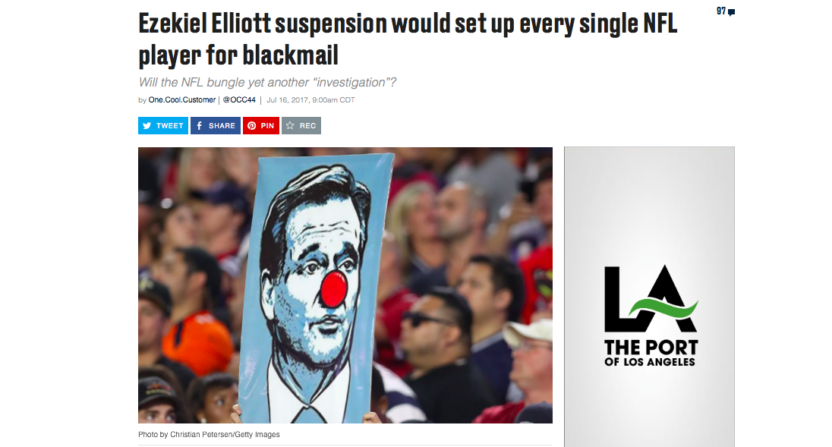 SB Nation has had a bad year of having to delete blogs written by its various team sites for their insensitivity. Less than two weeks ago, the company fired the editor of its Utah Jazz site for making homophobic jokes.

Now, the network has hit a new low, as the company’s Dallas Cowboys site, Bloggin’ The Boys, posted an awful article that claims NFL players will be easy targets for blackmail if Cowboys running back Ezekiel Elliott is suspended due to a domestic violence allegation.

The post was deleted early Monday morning, but a cached version remains. The lowlights are very bad:

Which means that suspending Elliott based solely on an unprovable accusation sets a dangerous precedent that would set up every single NFL player as a blackmail target.

Even if the league suspends Elliott without pay for just one game, it effectively sets the market price for an unprovable accusation: at least one NFL game check.

You may think the threat of blackmail is far-fetched, but it is not.

Effectively, any acquaintance with a grudge – or with a need for cash – will be handed a weapon by the league in case of an Elliott suspension based on the DV allegation.

The article is entirely based on the idea that Elliott shouldn’t be suspended because the police never pressed charges. However, it ignores the fact that prosecutors often have their own interests in deciding not to pursue a case—like not wanting to take a case they feel is difficult to prove and would likely lose—and the fact that the burden of proof is, and should be, different for a criminal investigation and deciding whether to suspend someone from football games.

The story goes on to make absurd claims that it even says “you might think … [are] far-fetched.” It lists stories of players having publicized sexual encounters and then says “but what if those people wanted to get back at the players!?”

This is a common argument by men who are terrified of women, even though false claims of domestic violence and rape are extremely rare. You know how to not walk around terrified that someone’s going to try to use your relationship against you? Be responsible in your relationship and it won’t be an issue.

The article also offers an example of potential blackmail, against Robert Griffin III, that … didn’t work.

Even stranger is that the article wasn’t pulled until almost a day later, when it was discovered by prominent journalist Jessica Luther.

Lying bitches, amirite? WHAT THE FUCK IS THIS, @SBNation? Lordt. https://t.co/Z3XLtaPtJG

As Luther notes, there are ways to write responsibly about the NFL’s domestic violence policy, like Deadspin’s Diana Moskovitz has done, but this article was clearly written by someone who has no idea how to write about domestic violence, and was just using their own, unsubstantiated pre-existing thoughts on the subject to put together an illogical piece.

The writer, One.Cool.Customer, is still listed on the site’s masthead as an editor.

SB Nation will likely release a statement, as it has in the past, saying that the writer is a contractor and that the article did not meet their editorial standards. That’s generally how the company handles conduct issues by writers at its team sites, who are often unpaid or paid very little and have wide autonomy in editorial decisions.

However, as much as SB Nation tries to separate itself from these team sites, they’re still very much part of the company and making it a lot of money. That’s a problem, as sports media veteran Tomas Rios noted.

Sooner or later, SB Nation's gonna have to take responsibility for the shit it publishes and profits from. https://t.co/i1Bf39Zd64

Really, the issue is that you can't have the vast majority of your editorial produced for free and without supervision. It's just wrong.

As these incidents pile up, SB Nation will need to rethink its editorial strategy. The current setup is great for the company’s business, but it’s also an easy way for lots of bad, and even harmful, pieces to be published.